More on this here, including a link to our legal papers:

Yesterday, Public Advocate Letitia James and Class Size Matters filed papers in court, requesting to intervene in a lawsuit in which the Department of Education is arguing that School Leadership Teams are not subject to Open Meetings Law because they have only advisory powers. 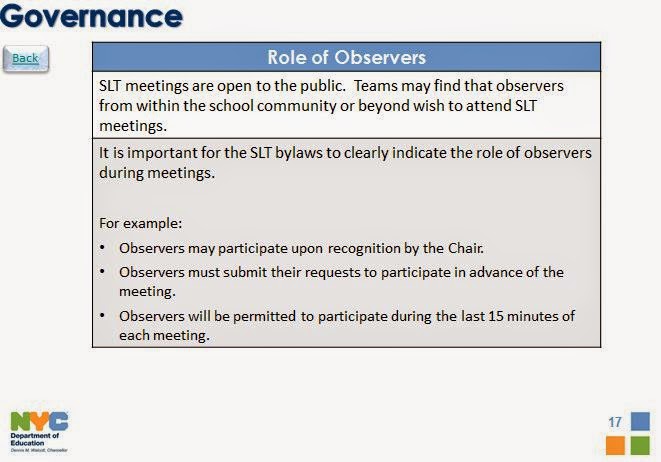 In April of 2014, Michael P. Thomas, a retired teacher,  tried to attend a School Leadership Team at a middle school on Staten Island,  and was prevented from doing so.  In an earlier case, teacher Francesco Portelos, was also prevented from attending his school’s SLT meeting.  In that case, a Judge wrongly found on the side of the DOE that SLTs are not public bodies because they are only advisory.

Yet the DOE's position is wrong for at least three reasons.  First of all, School Leadership Teams, made up of half parents and half school staff,  have more than advisory powers, and they make critical decisions for each school, as clearly delineated in Chancellor’s regulations and in New York State law. In 2008, when then-Chancellor Klein rewrote the regulation on SLTs and tried to strip them of their powers, Class Size Matters helped Marie Pollicino, then a member of the Community Education Council in District 26, file a complaint with the State Education Commissioner. (Here's a Daily News article and our blog about this complaint.) Marie's complaint was later joined by Mel Meer, an active Queens parent and Community Board member, and the UFT.

In his decision, Education Commissioner Mills ordered the Chancellor to rewrite the regulation, because it “strips the SLT of this basic, statutorily mandated authority” to develop the school’s Comprehensive Education Plan, which contains the fundamental goals of each school and the roadmap for achieving them.  Principals must align the school-based budget with the CEP, and if they do not, SLT members have the right to issue a formal complaint.  (Here's an article about this decision from our blog, and Chalkbeat, then called GothamSchools.) The SLT’s ultimate authority over the CEP was subsequently reinserted not only in Chancellor’s regulations but also in the 2010 state law pertaining to New York City school governance.

Secondly, the DOE errs in its definition of a “public body.” There are many public bodies that are subject to Open Meetings law, such as Community Boards, Commissions and other official bodies that may have only advisory powers but have a mandated role in governance.  Public bodies perform a governmental function for the state, an agency or department, must follow certain set procedures and require a quorum to operate.  This is also the case with SLTs, which according to state law, must meet monthly, have a quorum to make decisions, and  must “provide notice of monthly meetings that is consistent with the open meetings law.”   Even a DOE powerpoint during Walcott's chancellorship about the roles and responsibilities of SLTs clearly states that "SLT meetings are open to the public.  Teams may find that observers from within the school community or beyond wish to attend SLT meetings."  (This powerpoint is still online at the DOE website here and the slide is posted above.)

Finally, because SLT meetings are held in school buildings, they must be open to the general public under a different state law. Recently, the Mayor was found to have violated this law by the Special Commissioner of Investigation, when he held a closed meeting with union groups at a Brooklyn public school.

On December 16, Public Advocate James, joined by Class Size Matters, several public interest attorneys and  Community Education Council Presidents, strongly urged Chancellor Farina to reverse the DOE’s legal position in a letter posted here.  On December 19, Courtenaye Jackson-Chase, General Counsel of the DOE, refused to do so; her letter is here.  This led to the decision of the Public Advocate and Class Size Matters to request to intervene in this case.

It is particularly distressing to have to re-fight old battles to ensure DOE recognizes parent input into school-level decision-making.  Somehow it feels like Groundhog Day, with the DOE showing blatant disrespect for parents, over and over again. One might have expected this under Joel Klein, who didn't pretend to have any regard for parent views, and little for the law. But for an administration that claims to want to collaborate with parents it is disgraceful.

Thanks to PA James, for standing up for full transparency and the rights of parents and community members once again. The case is due to be heard next Wed. January 14, by Judge Peter Moulton of the NY Supreme Court.  The full press release is below.

(New York, NY)— On Wednesday, January 7, 2015, New York City Public Advocate Letitia James and Class Size Matters filed papers in New York County Supreme Court, requesting to intervene in a lawsuit to challenge the Department of Education’s (DOE) position that School Leadership Teams (SLTs) are not subject to Open Meetings Law because they have only advisory powers. The petition argues that SLT meetings should be subject to the Open Meetings Law (N.Y. Pub. Off. Law § 100).

Although the DOE regulations acknowledge that SLTs— comprised of parents and school staff, and including the PTA President, the UFT Chapter Leader, and the Principal— must abide by most of the provisions of the Open Meetings Law (including providing adequate public notice before any SLT meeting is held), the DOE currently does not require these meetings to be open.

SLTs are the primary vehicle for shared decision-making for each school; they have sole authority for establishing a school’s Comprehensive Educational Plan, which sets the goals and educational strategies for the coming school year. SLTs also heklp ensure that the school principal’s budget aligns with that plan.

The underlying lawsuit was filed by Michael P. Thomas, a retired teacher, who unsuccessfully attempted to attend a SLT meeting at a middle school located in Staten Island in April 2014. In an earlier case, another educator Francesco Portelos, was also stopped from attending his school’s SLT meeting. In that case, a Judge found that SLTs are not public bodies because they are only advisory.

“School Leadership Teams are more than advisory— they are critical to the school governance structure, though the Department of Education asserts that they are not subject to our State’s Open Meetings Law. I am proud to be joined by Class Size Matters in this legal effort to increase transparency in educational planning, and encourage participation in school governance through publicizing these vital meetings. Through these measures, we can increase parental input in important school decisions,” said New York City Public Advocate Letitia James.

“It is very disheartening to learn that the DOE is once again is trying to argue that parents, through their School Leadership Teams, have no real authority to make decisions for their children’s schools.  We fought the DOE when Joel Klein tried to strip SLTs of their powers in 2008, and won. The Commissioner forced the Chancellor to rewrite the regulations to recognize the SLT’s power to create the school’s Comprehensive Education Plan, and this authority was clearly established in the 2010 state governance law. To undermine the legal status of SLTs once again is quite shocking,” said Executive Director of Class Size Matters Leonie Haimson.

“The public has the right to observe the decision-making process in our schools and to hear first-hand the issues affecting our children,” said Michael P. Thomas, plaintiff in the lawsuit.

“Community participation is critical to the success of New York City’s public schools– just as strong public schools are critical to the success of our communities. NYLPI is proud to help protect the public’s right to know about decisions made at School Leadership Team meetings, and to ensure that the Department of Education fully complies with New York’s open government laws,” said Mark Ladov, staff attorney for New York Lawyers for the Public Interest.

In the court proceedings, the Public Advocate is represented pro bono by attorney Laura D. Barbieri of Advocates for Justice; Class Size Matters is represented by Ms. Barbieri and Mark Ladov of NY Lawyers for Public Interest.

Preliminary arguments in the Thomas case are expected to be heard by Judge Peter Moulton of the NY Supreme Court on Wednesday, January 14, 2015.