What the NY Post left out: how Sharpton was persuaded to ally himself with Joel Klein & stay mum on term limits 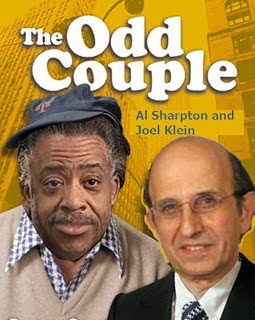 Today, the NY Post ran a story about how Al Sharpton accepts money from corporations in exchange for shielding them of accusations of racism.  It contained nothing very new to report, except for Sharpton having met with Amy Pascal of Sony after the company's embarrassing email breach – though the article offered no evidence Sony has paid him a dime.

Presumably the Post is targeting Sharpton because of his association with the Mayor: “Sharpton, who now boasts a close relationship with Obama and Mayor de Blasio, is in a stronger negotiating position than ever.”  Yet the main example cited in the article happened years ago, during the Bloomberg administration:

The donation raised eyebrows. Although the money was ostensibly to support NAN’s efforts to bring “educational equality,” it also came at a time that Plainfield was trying to get a lucrative gambling deal in New York.

Plainfield had a $250 million stake in Capital Play, a group trying to secure a license to run the coming racino at Aqueduct Racetrack in Queens. Capital Play employed a lobbyist named Charlie King, who also was the acting executive director of NAN.

Left out of this account is the most interesting part of the story.  It's not just that the money for Sharpton was ostensibly for “equity” and funneled through Education Reform Now, the non-profit arm of Joe William’s pro-charter Democrats for Education Reform. The larger context is that ERN was merely a pass-through, and the money was directed to Sharpton through the Education Equity Project, founded by then-Chancellor Joel Klein, in exchange for Sharpton agreeing  to co-chair the group and adopt Klein’s aggressive anti-teacher, pro-charter stance.  Juan Gonzalez extensively reported the tangled story of how these funds went to benefit Sharpton in 2009, and how they helped him stay out of jail when he owed millions in taxes to the IRS.

Also left out of the Post article is how Bloomberg, the Gates and Broad Foundations also put big money into EEP to Sharpton's benefit, though the DOE flack, David Cantor denied any involvement of either Bloomberg or Gates in emails he sent to our NYC Ed list serv, when I speculated about the involvement of both.  Perhaps he was lied to as well.  See my timeline of events here. In fact, Sharpton’s organization directly received a big portion of the $250,000 donation Mayor Bloomberg gave EEP, the day Bloomberg announced he would try to overturn term limits.  As a result, Sharpton never said a word against Bloomberg’s successful coup.

Despite big infusions of cash and the coupling of Klein and Sharpton, EEP didn’t last long.  It held a  rally in DC on MLK day in January of 2009, at which Sharpton spoke.  After joining forces with Newt Gingrich, he and Klein met with President Obama.  The organization folded in 2011 when it merged with the similar corporate reform group, Stand For Children.  Sharpton had already left EEP by then, replaced by two Gates grantees, United Negro College Fund President Michael Lomax, and Janet Murguia of the National Council of La Raza.

Perhaps the Post reporter's omissions are understandable, given that Klein now works for the Post’s owner, Rupert Murdoch, who is also a member of the Billionaire’s Boys Club, pushing for more charters along with his old friend and ally Bloomberg.  But the story should have been told nonetheless. In his new memoir, I highly doubt  Klein explains the full circumstances surrounding his cynical and mutually exploitative partnership with Sharpton.  I certainly didn't read this mentioned in any of the reviews.
Posted by Leonie Haimson at 1/04/2015 08:08:00 PM

Klein was on Close up with Diana Williams a couple of weeks ago. His performance was so nauseating, it was an incredible relief when it was interrupted for a special announcement from DeBlasio. Klein has no power or authority. Authority is given and power is taken. No one elected Sharpton, he grabbed power and continues to hold on to it. This may have been what attracted DeBlasio to him. Indeed, it seemed DeBlasio came out of nowhere and did the same thing. He needs to act decisively and get rid of the amazing amount of left overs from Bloomberg. I believe there is a concerted effort from the media and the leftovers to destroy his credibility -and it's working.

Sad, our children are being used & robbed. Mr. Gates needs to ck what people are using his money for. Mr. Gates expects money to be used for children & education. Here in Hartford, CT Mr. Gates donated money to a school. I see no changes. School is worse.

joel klein aka the devil himself here on earth

None of the antics of the notorious race-baiter (Al Sharpton) should be a surprise for those who have followed his career. We would all be better off if politicians, including our mayor and president, would just ignore him (after arresting him for failure to pay his taxes).