The Occupy Activist Teacher that the DOE Spent $1,000,000 to Try to Fire and Lost 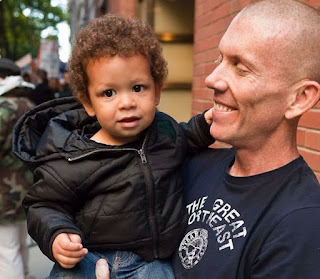 Here is the story of David Suker, a US Army veteran who taught at-risk students for 14 years, and was removed from a Bronx GED classroom in December 2011 after he’d spoken out about the horrendous conditions experienced by the students there. As reported by Sue Edelman in the NY Post, DOE spent four years and more than $1 million trying to fire him, a case that they lost at every level; first the arbitrator, then at the State Supreme Court level, and at the Appellate Court.  Now yet another arbitrator has ordered him reinstated, and that he be given $260,000 in back pay, though he has to pay a $7000 fine.

The saga of my current ordeal, the three year termination of my ability to teach in NYC schools, and subsequent reinstatement by some of the highest courts in New York, specifically the New York State Supreme Court and the Appellate Division, oddly began back in August of 2008 on my way to the Democratic National Convention in Denver to witness history. Barack Obama was being nominated, and as a licensed high school social studies teacher, I wanted to say that I was there. Well that didn't happen.

While riding my Vespa Scooter to the convention from New York City, about 100 miles from Denver I was blindsided by an 18 wheeler from behind. It's safe to say I was lucky that I escaped with my life -- a broken jaw, some really bad scrapes and nothing more. I took three months off to recuperate, but when I came back to teach I was placed in a stairwell, outside of the main office, where the main office to my program, GED-Plus was located, with no teaching responsibilities. At the time I thought this was odd, but I was just glad I was alive and back to making a living. I didn't view this as punishment, but now with hindsight, I see how vindictive this system can be.

The reason I was sitting in the stairwell – I sat there for over a month before the administration of GED-Plus grudgingly sent me back to my site to teach my GED students -- had nothing to do with my competency but did have everything to do with my big mouth. You see, my principal, Robert Zweig, had been appointed Deputy Superintendent to District 79 (the district composed of alternative high schools and programs) a year previous, but his appointment was held up because of  allegations that he had a liaison with an assistant principal. The investigation took about a year and I'm pretty sure he was cleared, but I suspect that now he was in a position of even more power, he felt emboldened to go after those teachers who had been speaking out about him and his leadership of the program.

The previous incarnation of GED-Plus was called OES, or Offsite Educational Services, and that was closed in June of 2007. Principal Zweig was promoted, the teachers had to reapply for their jobs, and we were all very nervous. Few people spoke out, but I did and now I see the price was huge. I was put in the Rubber Room for 18 months shortly after being placed back in the classroom in 2009, but no charges were ever brought.

The Rubber Rooms were supposedly closed in June of 2010, and in October of that year I finally went back to teaching. I wasn't sent back to my old site on 145th Street in Harlem where I had previously been so successful, helping get over one hundred students their GED's over a three year period in a one teacher site.

No, I was sent to a dumping ground for teachers and students alike at Bronx Regional High School, a GED-Plus "Hub" with multiple classrooms where our 17-21-year-old students were the most disenfranchised in the system. This ESL/Literacy/Pre-GED site was where I was to be kept an eye on by my principal. I know this because I was standing outside my AP's door on my first day there and I overheard his conversation with her.

Things at this new site were not terrible by NYC standards, but even I was surprised at the lack of concern for moving our students into more advanced programs. All the administration cared about was attendance and enrollment. At the end of the year I was given an Unsatisfactory rating and a $1,000 fine for the ten absences. Most of my absences revolved around the care for my dad who has Parkinson's, but Zweig didn't bother to ask.

Then Occupy happened. I was arrested at the lead of the march across Brooklyn Bridge and four more times.  I plead guilty to one violation, and was found guilty of of another because I ignored the lawful order to get off the bridge. I was happily an "Occupier" and teacher and felt the two could coincide. That thought didn't last very long. At the time of my third arrest, the DoE removed me from the classroom, placed me in a "working" Rubber Room and started a full-on 3020-a termination hearing against me.

The DOE started digging up the most minuscule offenses from my past to charge me with.  When  even that  wasn't enough to silence my criticism of the DOE and its policies affecting at-risk youth,  a "memo" was sent. The DoE wanted to know where my daughter lived because she was at a NYC high school and in 10th grade, and I was living part-time in Long Island, taking care of my dad.

Without my knowledge, they interrogated my daughter at least three times, finally getting her to admit that she lived in the Bronx with her mom. My daughter never told me or her mother about any of this because of the shame and responsibility that she felt for getting me in trouble. They sent undercover investigators to her house and to the management company for the apartment in which she lived. They also knew her mom's and my dad's automobile license numbers and were secretly watching them for some substantial amount of time, which I learned from all the details in the Special Commission of Investigations report that I first saw during the middle of my 3020-a proceedings.

This final charge of "defrauding" the DoE was what got me fired. The problem with that charge is that I never committed fraud, plus the charges went back years ago, to when she was in kindergarten, 1st grade, and 5th grade, when I applied and enrolled my daughter into the three public schools that she attended. This fraud charge was erroneous because I was living in multiple addresses in the districts where my daughter’s schools were located and I didn’t have a permanent address from the time my daughter was in kindergarten.

There is a three year limit for which you can bring 3020-a charges and this "fraud" charge was clearly past that point, because my daughter was in her 2nd semester of 10th grade. They tried getting around this by arguing that this was "criminal" conduct, but never attempted to prove this was a criminal offense to the arbitrator, let alone in criminal court.

The fraud charge was thrown out in 2013 by the New York Supreme Court and the remaining charges were remanded to another DOE arbitrator for punishment less than termination.  Here is an excerpt from the Supreme Court decision from Judge Alice Schlesinger:

As this Court stated earlier, the school’s leadership did not want petitioner Suker to remain there as a teacher. They did not like him or approve of his actions. They believed he was insubordinate, that he did not conduct himself properly, that he was getting arrested too often, and probably that he was not a team player. It is possible that much of that is true. But with the exception of the two episodes involving disruptive students, which had occurred almost three years earlier in 2009 and had not resulted in discipline, no one has claimed that David Suker is not a good and/or effective teacher.

Finally, it should be noted that the conduct spelled out in Charge 3, regarding a false address for his daughter, never involved Suker’s own school and never would have been discovered but for the DOE’S decision to target Suker to see if an investigation could find something to be used against him, which it did. But that “something” should not be a basis for terminating this tenured teacher, for the reasons already discussed.”

But the DOE refused to give up, and appealed the case to the Appellate Court, where they lost once again, wasting another two years of my life and thousands more in taxpayers’ dollars.

The lesson that I've garnered from this more than seven year odyssey is that the system is irrevocably broken, but that at least a few teachers can seek out and find justice, myself included. Imagine though for a second what happens to the student that is caught up in a similar Orwellian nightmare, which I'm guessing is not all that uncommon.

If I almost succumbed to multiple threats over the past several years and I'm a veteran, father, and "educated professional," with everything to live for, then what are our students and their parents facing? It's those nightmares that I try to avoid when I fall asleep at night, but the reality isn't so kind.

Thank you for listening. :)

CONGRATS DAVE ON WINNING YOUR JOB BACK, AND SEEING THE FIGHT THRU TO THE END. KEITH

So glad I am leaving the system. Good luck to you and keep on keepin' on.

I love harmlem but cant stand Dani Mcpartlin! She doesn't deserve her job. She is only in for status. She got my baby suspended.