So many reasons to #optout: Let’s keep it going until our kids get the schools they really deserve!

It’s that time of year again: Students throughout NY State will be subjected to the burdensome, stressful, overly long, confusing and poorly constructed state exams.The ELA exams will be held from Tuesday, April 5 to Thursday, April 7, and the math exams from Wednesday, April 13 – Friday, April 15.  (Schedule here.)


There were stories in today's New York Daily News and Politico New York about the dynamite NYC Opt Out press conference yesterday at City Hall, in which parent leaders demanded that DOE inform parents throughout the city that they have the right to opt out of the upcoming exams.
There is a dearth of information in many schools about this, particularly in immigrant and Latino neighborhoods, as Johanna Garcia of District 6 Presidents Council pointed out at the press conference – despite the fact the state tests are especially inappropriate for English Language Learners and provide no useful information about their skills or progress.
Other parent leaders in schools with predominantly students of color spoke of principals who had misinformed them, saying that their kids could be held back if they opted out -- even though there is a state law barring this.  The disparity in information provided across the city is in itself a civil rights violation, parents maintained,  reflecting and perpetuating separate and unequal conditions in our schools. 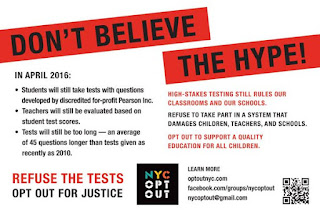 Last year, I appeared on a news show with Angelica Infante-Green, then NY Associate Commissioner of the Office of Bilingual Education, now the Deputy Commissioner.   Ms. Infante-Green agreed that the state tests provide NO useful diagnostic information for ELLs, and that then-Commissioner John King had asked for a waiver from the US Department of Education so that ELLs would not have to take the state test for two years.  The waiver  was denied.

Yes, this is the same John King who is now US Secretary of Education.  Ms. Infante-Green said the state really believed that ELLs should be excused from taking the test for three years, but they hadn't asked for that as they had thought they couldn't get such a waiver.
The test is also particularly abusive to kids with special needs.  At the press conference, Brooke  Parker spoke about how at a private meeting of District 14 parents with Chancellor Farina, she had asked the Chancellor if her dyslexic daughter, a struggling reader, should take the test, and the Chancellor said no.

Here's an account of a similar private meeting with parents in District 15, in which the Chancellor said that parents of children with special needs and immigrants should opt their children out.  But why tell this to parents in private meetings, without making this information public throughout the city?

Last year,  only 6.9 percent of NYC students with disabilities and 4.4 percent of ELLs “passed” or were deemed proficient on the ELA exams.

Council Member Helen Rosenthal also spoke about the resolution she sponsored that was unanimously approved by the City Council last year, calling for the right of parents to opt their children out of state testing to be included in the DOE Parent Bill of Rights and  sent to every NYC public school parent each year.

Although in Schoolbook, it was suggested that there is a risk of losing federal funds in schools with high opt-out rates, this has never happened.  As Jeanette Deutermann of Long Island Opt out pointed out at the press conference, there are many schools and districts throughout the state that haven’t made the 95% participation rate for three years and have not suffered any loss of funds.  Budget cuts because of high opt out numbers are even more unlikely to occur this year, as it would cause a firestorm and are openly opposed by the Governor, the Commissioner, and  the new  Chancellor of the Board of Regents Dr. Betty Rosa.

More than anything, opting out of the state exams is the most effective tool parents have to protest and disrupt the push to defund, dismantle and privatize our public schools – and turn them into test prep factories where children are treated as data points rather than human beings. 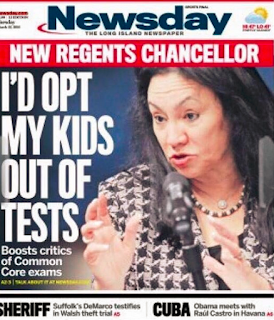 The huge 20 percent opt out rates in NY State last year led directly to the Governor changing his position on linking teacher evaluation to test scores, and also helped lead to the selection of Betty Rosa as the new Regents  Chancellor.

The selection of Dr. Rosa, an experienced Bronx educator with years as a teacher, a principal and a Superintendent, to replace Merryl (“Push kids into the deep end of the pool”) Tisch would never have happened without the huge opt-out movement in NY over the last two years.

In fact, in her very first press conference Dr. Rosa said that if she still had kids in the public schools, she would opt them opt.  See yesterday's  Juan Gonzalez column for more on this: "This grass-roots civil disobedience stunned the politicians and data-obsessed bureaucrats who have dictated public education policy for more than a decade.Ever since then, the bureaucrats have been scrambling to win back the confidence of fed-up parents."
Here are even more reasons to opt out of testing this year: 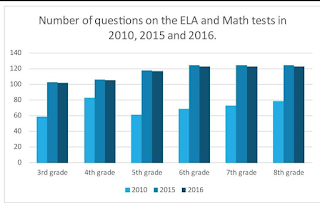 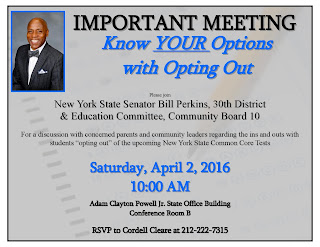 Here’s a nifty quiz you can take yourself about the exams.  Here is a sample letter you can send to  your principal from NYSAPE; here’s one from Change the Stakes.

Here are more detailed explanations by testing expert Fred Smith, Jessica McNair of Opt out Central NY, and NYC teacher Katie Lapham about exactly what has and what hasn’t changed ,and why the current testing regime produces unreliable results and is bad for kids.

This Saturday, at the office of Senator Bill Perkins at 10 AM, there's a meeting to provide parents with more information on this issue.  Address: Adam Clayton Powell State Office Building 163 West 125th Street, Conference Room B.
See the video below from NYS Allies for Public Education and another from filmmaker Michael Elliot, with simple instructions on how to opt out.

Let’s keep the opt-out movement going until our kids get the schools they really deserve!

First of all my 6th grader received math test prep homework the night before the ELA test. This upset him and me. Secondly my child was not permitted to read or do anything for more than an hour after he finished the test. I think it's reasonable to allow the children to read and not be so distracted by boredom for more than an hour if they finish the test early. As far as the contents, he was not impressed by it and said he found at least one of the stories to be "stupid".