What is City Hall trying to hide? See their decision memo blacking out why they refused to align the school capacity formula with smaller classes

Yesterday, the DOE announced changes to its Freedom of Information guidelines, stating that from now on, they will attempt to more accurately estimate when they will provide the documents requested, including "the approximate date, which must be reasonable under the circumstances, when the request will be granted or denied." 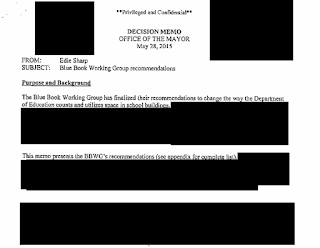 The current practice is that every month or so, the DOE’s legal office sends you a boilerplate email saying they are still looking for the document, but “due to the volume and complexity of requests” it will take another month “to respond substantively to your request.”  Then the next month goes by, and you get the exact same message again.

I currently have four FOIL requests outstanding for over a year, including the Renewal school’s class size reduction efforts and funding for this purpose, technology spending by DOE between 2011 and 2015, the cost of charter school facility upgrades and leases charter leases and facility upgrades between FY 2014 and FY 2016, and the names of the private organizations receiving student personal information and the legal agreements on how this data will be used and shared.

All these requests were filed in April 2016 and I am still waiting; nearly a  year and a half later, for a substantive response.

Despite de Blasio’s campaign promises that he would reform the FOIL process and respond in a more timely fashion, the response time is now worse than ever, and DOE remains the least transparent city agency in response time according to this Chalkbeat analysis.   (See also the section on Transparency in the KidsPAC report card in which the Mayor got an "F".)

The current wait times and continual postponements of a substantive response are a violation of law, since they represent a “constructive denial” according to Robert Freeman of the NY Open Government Committee and other experts.  Whether or not this new procedure will mean that the DOE will respond any more speedily to FOIL requests is completely unknown.  I remain skeptical. The new policy was instituted as a result of a lawsuit by the NY Post, so perhaps if the DOE doesn’t shape up their act, they will have to go back to court.

When I was on vacation in the middle of August,  I did receive a substantive response to one of my FOILs – this time one I filed to the Mayor’s office.  On April 10, 2016, I asked for the decision memo from the Mayor's office about their decision  to accept or reject the thirteen recommendations of the Blue Book Working group . This working group, appointed by the Chancellor and co-chaired by Lorraine Grillo, the head of the School Construction Authority, had recommended in December 2014 that the DOE align the school capacity formula to the smaller class sizes in their original Contract for Excellence class size reduction plan

The City sat on these recommendations for more than six months, and finally in July 2015, in the middle of summer, announced that they would accept seven of the 13 but reject six others, including what many members said was the most important one: to align the capacity formula with smaller class sizes.  There were several articles about this rejection, including in Chalkbeat and WNYC Schoolbook , DNAinfo, and on my blog here  and here.

The city’s decision not to align the school capacity formula is also an important factor cited  in our class size complaint to the state, filed in July; (see p. 13 of the complaint) , providing yet more evidence of the city’s violation of the Contract for Excellence law, which requires NYC to lower class size and to align its school construction plan with its class size reduction plan. To this day, no one from City Hall has explained their reasons for rejection this proposal -- though members of the Working Group have repeatedly asked for them to do so.

The final decision memo from the Mayor’s office that I finally received in August is dated May 28, 2015, and is almost entirely blacked out.   The only info that is legible pertains to which recommendations they accepted, with all the explanations for the basis for their decisions redacted.  They even blacked out any mention of the six recommendations they rejected.

The other interesting aspect of the decision memo is how it was signed off on by many high- level staff -- including the Deputy Mayor, the Corporation Counsel, the Chief of Staff, Emma Wolfe, and Dean Fulehain, head of OMB, but no one from the DOE or SCA, which is peculiar given how the issue pertains to the way school capacity will be measured.


The Mayor’s office FOIL determination letter that I received along with the memo claims the redactions were made because of the exception to FOIL listed under Public Officers Law Section 87(2)(g):
Documents exempted from release include:
(g) are inter-agency or intra-agency materials which are not:
i. statistical or factual tabulations or data;
ii. instructions to staff that affect the public;
iii. final agency policy or determinations;

Yet though this decision memo does pertain to intra-agency communications, it is also a "final agency policy or determination."
It also presumably cited facts to explain and rationalize the decisions made.  If there were no facts cited to explain the decisions made,  this would even be worse.  Below is my appeal letter to the state, making these points with relevant evidence from previous court decisions and asking them to provide a cleaner copy.
_________________________

I am appealing the decision to redact nearly the entire City Hall decision memo dated May 28, 2015, that approved or rejected certain proposals on reforming the school capacity formula; this letter is attached.
The FOIL determination letter that I received along with the memo stated that the redactions were made because of exceptions listed under Public Officers Law Section 87(2)(g):
Documents exempted from release include:
(g) are inter-agency or intra-agency materials which are not:
i. statistical or factual tabulations or data;
ii. instructions to staff that affect the public;
iii. final agency policy or determinations…


Yet though this decision memo does include intra-agency communications, it is also a "final agency policy or determination."   It also presumably included at least some facts to explain and rationalize the determinations made, which should not have been redacted.
See also  these relevant legal cases, granting access to such documents, from the Committee on Open Government website:

I urge you to reconsider and remove these redactions that related to these determinations as:

1- this is a final decision memo; and 2- presumably the explanations contained at least some facts.

This appeal is filed within 23 business days from the day I received the redacted memo.