Why Emily Kim, former attorney for Success Academy, should not be allowed to start her own charter school 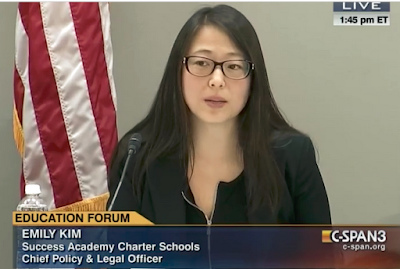 This email was sent yesterday as a public comment to the SUNY charter committee and the Charter School Institute, to urge them to reject the application of Emily Kim to start her own charter school in District 6. See also Tory Frye's letter of opposition here.

To the SUNY Charter committee and Board:

I urge you to reject the proposed authorization of the Zeta charter school, for many of the reasons cited by the Tory Frye of the D6 Community Education Council,[1] but also because Emily Kim, the proposed founder, was the chief attorney for the Success Academy chain while the network proceeded to repeatedly violate state and federal laws and deprive students of their civil rights.


Until the results of the investigations by the federal Office of Civil Rights and SUNY are released and these complaints and lawsuits are decided, it would be premature and ill-considered to allow Ms. Kim to open her own charter school, given her history of facilitating and defending repeated violations of children’s civil rights.

Below are additional personal observations by Fatima Geidi of Ms. Kim’s behavior, while her child attended Upper West Success Academy.

Yours sincerely,
Leonie Haimson, Executive Director
_________
To the SUNY board:

Emily Kim had a personal hand in making sure my son's IEP was not met. This happened continuously from first to third grade. She conducted herself unprofessionally in meetings, emails, and during phone conversations. On more than one occasion I had to not only seek but retain legal counsel to try to protect his civil rights and to obtain his mandated services as required by his IEP.

When I was banned from entering the school, Emily personally enforced the ban with no evidence of any misdeed on my part, and instead offered to find a new school for my child. The ban wasn't lifted until I appeared at a press conference with the Public Advocate Letitia James, in which Ms. James asked SUNY to investigate the abuse of special needs children.

Ms. Kim was supposed to be involved in mediation and conflict resolution when she reached out to me; however, her focus was not mediation but pushing my child out.

She helped cover the tracks of the staff when they didn't provide proper documentation for my son's numerous illegal suspensions.  Instead of making sure Success Academy followed the law, she helped them break it.

In 2015 my son's records were released to the public after a PBS interview. She did nothing to remove his records from the Success website knowing that it was a direct violation of FERPA.  Instead, my son's record stayed on the website until we filed a FERPA complaint and I joined a complaint to the federal Office of Civil Rights in 2016.

Through that same course of time Emily was attending press conferences and making public statements on behalf of SA.

Her public and private actions have shown time and time again that she does not care for the well-being of children or their education. Emily Kim does not deserve to run a school, where vulnerable children will be subjected to her abuse.

The behavior continues unchecked. My grandchild attends one of her charter schools and at the tender age of six has been suspended four times in the last two months. Nothing is being done to stop this abuse. Our society has completely failed our children and is jeopardizing their future. This is so frustrating to stand by and watch while parents hands are tied....