News & video of yesterday's press conference, where NYC parent leaders demand a voice in selecting the next Chancellor, and the mayor's response (so far) 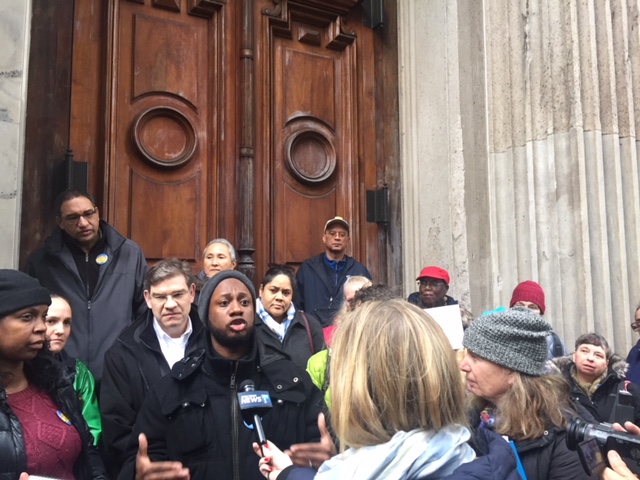 Yesterday's press conference where parent leaders from the Chancellor's Parent Advisory Council and the Community and Citywide Education Councils demanded that the Mayor give them a seat at the table in selecting a new Chancellor was covered by the Daily News, the Wall Street Journal, Chalkbeat, and NY1.  (The WSJ article is posted in the comment section below.)

The Mayor's response, according to the Daily News?

"While parent and community input is an important part of our chancellor search, the decision is ultimately the Mayor's, who is a proud parent of former NYC public school students,” said De Blasio spokeswoman Olivia Lapeyrolerie."

What?  How is parent or community input part of the Mayor's search, when the search has been undertaken in complete secrecy, no one has been asked their views and potential candidates don't even know how to apply?  And the suggestion here appears to justify excluding parents , because de Blasio was once a public school parent himself, is very curious.  By the same token, one might argue that he shouldn't have had to be elected by voters for a second term, because he was once a voter himself.

Lindsey Christ of NY1 dug up the 2012 video showing when de Blasio ran for office originally, he described how he would select a Chancellor this way:

"With a serious serious public screening. Cathy Black was pushed down our throats because of mayoral control gone to an undemocratic level.  No one said mayoral control meant a mayoral narrow inability to communicate, to give the public a role, to air ideas and decisions before they were made.  We need a more democratic small "d" version of mayoral control and we need a chancellor who is presented to the public not just forced down their throat."

Here is Lindsey's tweet today, with a response from Kim Watkins, CEC 3 President:

"A serious, serious public screening" is what @NYCMayor said in 2012 should happen with a Chancellor search. Now he says search will be secretive. We found the video of his 2012 comments. WATCH: pic.twitter.com/AuNDVYzxWt
— Lindsey Christ (@LindseyChrist) January 24, 2018


The Mayor's argument now seems to be that holding a public screening with parent input would discourage potential candidates .  But as David Bloomfield pointed out yesterday in Chalkbeat, this sort of public vetting goes on all the time in other districts across the country:

In those districts, community consensus is usually reached on a job description with desired qualifications. The post is widely advertised, often by a specialized superintendent search firm that conducts an initial review of confidential applications. A list of qualified candidates is presented to the Board of Education, which further culls the still-private list to arrive at three to five finalists.\\


After the candidates are given a chance to inform their current employers, they are publicly announced and interviews scheduled. In the ensuing weeks, the public and press explore finalists’ records. Members of the screening committee may even visit their home districts. Candidate interviews are often televised or streamed online. The position is then offered after a period of post-interview public comment and board deliberation.

Right now a similar process is occurring in Massachusetts, where three finalists who applied to be appointed State Education Commissioner are about to appear in public to answer questions:

The candidates were selected among 18 applicants by the preliminary screening committee made up of five board members who are voting members of the committee and 10 non-voting members from the public.  The education board will interview the finalists at a public meeting on Jan. 26, 2018 at the Omni Parker House in Boston.

This is far better than the haphazard process that brought us such Chancellors as Cathy Black in the recent past.  If candidates have the gumption to run the nation's largest school district, they should also have the confidence to appear before the public and explain what they would do in the job.

A thoughtful, transparent process would be a win-win for the mayor, enhancing his progressive credentials while allowing him to remain in the driver’s seat. A public search would also be a win for the city and the next chancellor, who would arrive with more of a popular mandate than if she or he was vetted and hired behind closed doors...A public process makes sense, and the moment is now.

A video of  yesterday's entire press conference is below, thanks to Norm Scott.

Parents Demand de Blasio Give Them Role in Chancellor Selection from MORE-UFT/GEM on Vimeo.
Posted by Leonie Haimson at 1/24/2018 05:09:00 PM

Representatives rallied in Manhattan, demanding Mayor Bill de Blasio give them a voice in the process

Elected parent leaders in New York City demanded Tuesday that Mayor Bill de Blasio give them a role in the selection of a new chancellor to run the nation’s largest school system.

When the mayor announced in December that Chancellor Carmen Fariña would retire in coming months, he said a national search already was under way. He said he would keep the process “close to the vest” to respect the privacy of candidates with jobs.

About two dozen elected parent representatives sporting buttons declaring “Parent Voice” rallied outside the city Department of Education in lower Manhattan on Tuesday to say the mayor should heed his campaign pledges of inclusive, transparent governance and family engagement.

They showed letters they sent Mr. de Blasio asking to meet with City Hall staff about their desire for input. Some want a group of seven parents representing special-education students, English-language learners and each borough to join the selection process.

A spokeswoman for the mayor said by email that “while parent and community input is an important part of our chancellor search, the decision is ultimately the Mayor’s, who is a proud parent of former New York City public school students.”

The morning rally included leaders of the Chancellor’s Parent Advisory Council, which represents parent associations citywide, and leaders of the elected Community Education Councils. The demonstrators noted that other cities include parents in the vetting process, and doing so would result in the city hiring a chancellor with a broader mandate to run a district serving 1.1 million students.

“Our children are the ones in schools,” said Angela Garces, a member of the Community Education Council for District 6 in northern Manhattan. “We’re looking to have input, we’re not looking to take over.”

The parents said they wanted a chancellor with experience in teaching and administration in a large, diverse district, with a record of collaborating with parent leaders, and a commitment to tackling segregation, among other issues.

Ms. Fariña, 74 years old, has said it was time to step down from the all-consuming position after four years as chancellor and a half-century of working in city schools.

Yes, this is the same Mayor who sat down with parents who believe in exercising their right to refuse the tests for their children, who was asked why the DoE will not agree with the unanimous vote from the City Council to inform parents of their rights. When asked why he does not take the voices of parents seriously, parents who voted for him based on his campaign promises, his answer was that he was democratically elected. He need not listen to us now, since we elected him king. OOPS! I mean, Mayor! And now, in his last term, he clearly does not feel the need to hear us again. Promises, promises....

This is a crock of crap because the parents are paid by the so called reformer organizations like students first and the other fake organizations trying to persuade the mayor to select a chancellor who will give the reformees what they want which is more charter schools taking over space in our public schools.

Parents in NYC have no idea we even have a chancellor. The parents are being used as pawns for these fake organizations trying to push the decision their way but the reality is that diblasio will have the final say and good bye reformers.

I can assure you Anonymous that these parents are not paid by any fake organizations like Students First or FES pushing charter schools. These are public school parents all, public school advocates and complete volunteers.

Leonie, thank you for all you do and you have done some great work but I have knowledge of the fact that the parents are paid. Further, the ATR protestors were paid $20 to protest and $50 to protest with a sign so I am not shocked that they are paying parents to protest again. I do believe that most parents do not even know we have school chancellor.

Anonymous — I published your comment above but the fact is that none of the parents who appeared at this press conference were paid to do so. CPAC and the CECs are completely volunteer organizations, and the parents who serve on these bodies spend much time advocating for our schools without any recompense and very little acknowledgement. Many of them took hours out of their lives to travel to Tweed, they all paid for subway fare themselves, and don’t merit your accusations. I don’t know anything about the ATR protesters or what event you are referring to here. If you have contrary evidence, please post it here or email it to me. Otherwise hold off making any further false accusations.

In response of the people posting claims these are paid parents and that they don't represent the interest of parents: look things up before hitting submit.
These are parents actually elected (either directly or indirectly) by all public schools PA or PTA's. They do represent the interest of public school parents in NYC. ECC is the city wide body representing CEC's (PA and PTA execs of every school in the city elect CEC members). CPAC is the city wide institution that represent every PA/PTA president in the city, again, elected by the parents.
None of these positions are paid, and frankly those paying for fake parent support (Like charter schools do, but not only) don't have any interest in supporting these efforts that go toward a read participatory democracy.