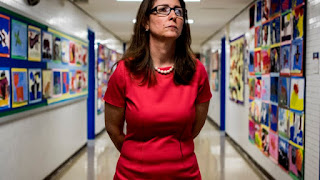 The only reason Success can't find a qualified special ed teacher is that no special ed teacher in his or right mind would even consider working at that sweatshop of a school chain. Special ed teachers are alway in need in regular DOE schools where teachers have sane working conditions compared to Success. Moskowitz will always have to scrape the bottom of the barrel for qualified teachers but the fact is that she does not even care if they are qualified as this story shows. I am very delighted that these stories are coming out and that Success and other charter schools are being exposed for the shams that they are.

Just got called into a meeting to let me know days away from 1st day of class that my child "wouldn't benefit because of the large size classes". Thank Success Academy Harlem 1 for nothing. I am truly disappointed and I believe if they follow the public school system, they should also have 12:1:1 setting. They wanna take only the brightest kids and not even bother with those in need. What's success when kids are already, smart? can we get success stories for kids who needs special help too???