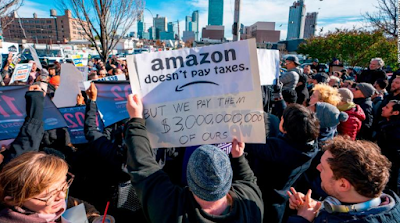 There have been loads of news stories and opinion pieces written over the last few days about the decision of Amazon to pull out of the deal to site their second headquarters in Long Island City. The reality is that most community activists as well as those in nearby Queens neighborhoods vehemently opposed the deal because there was absolutely nothing in it for them, except even more rapidly rising rents, more congestion, less affordable housing and the loss of three potential sites for schools.   (I co-wrote an oped shortly after the deal was announced on the likely negative impact on the neighborhood's already overcrowded schools with parent activist Sabina Omerhodzic in Gotham Gazette here.)


Long Island City is already the fastest growing neighborhood not only in NYC but in the entire country, and it badly needs infrastructure improvements to serve its residents.  Mayor de Blasio and Governor Cuomo tried to bypass the City Council and the community through a top-down executive action, similar to Trump's attempt to force the construction of a wall on our borders, by refusing to put the development proposal through the usual public input process called ULURP.
In the only check to their authority, Sen. Mike Gianaris who represents the community, was appointed  by Senate Majority Leader Andrea Stewart-Cousins to the Public Authorities  Control Board that would have to approve the deal.  This represented a huge hurdle as Gianaris was passionately opposed to the agreement and is even more powerful now that he's the Senate Deputy Majority Leader and helped engineer the Democratic takeover of that body.
In any case, the agreement that the Mayor and Governor made with Amazon offered residents nothing but more pain, while giving nearly $3 billion in subsidies and tax breaks to the corporation that could instead have been used for infrastructure improvement -- indicative of how the Mayor views economic development as trumping the needs of residents for a better quality of life and uncrowded schools for their kids.
As many have pointed out, the reality is that there are lots of tech companies that are expanding fast in NYC without being offered any tax breaks, subsidies, or city-owned property.  Apple, Google and Facebook are all hiring additional staff and renting buildings in the city, because young people want to live here.
Contrary to the claims made by the Governor and others, I  doubt any NYC elected official who criticized the deal risks losing  his or her seat over this. It was just announced that Amazon will pay nothing in federal taxes despite a profit of $11.2 billion last year.  An indication of how the political tides have already turned, de Blasio appears eager to switch sides and blame Amazon for the deal's collapse - not any of its opponents. As he writes in today's NY Times,

Amazon’s path in New York would have been far smoother had it recognized our residents’ fears of economic insecurity and displacement — and spoken to them directly.
We just witnessed another example of what the concentration of power in the hands of huge corporations leaves in its wake. Let’s change the rules before the next corporation tries to divide and conquer.
And let's hope the Mayor and Governor have learned their lesson and change the calculus by which they make decisions, by no longer eagerly giving away billions of dollars and city property to wealthy corporations while ignoring the needs of the communities they are supposed to serve.
.