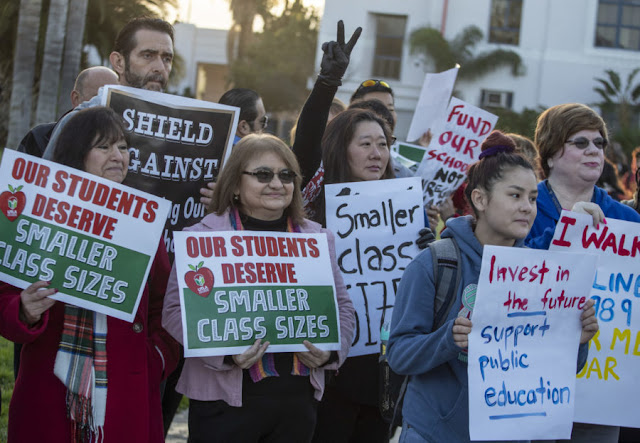 Update 3/2/19:  After a seven-day strike, the Oakland district and the union have tentatively agreed to a new contract that includes an 11% salary increase over four years, more counselors, psychologists, related service providers and speech pathologists, and to phasing in lower class size caps starting next school year in Kindergarten to 23 students per class;  1st-3rd grade classes to 26 students per class ; 4th-5th grade classes to 29  students per class and HS classes in core subjects to 31.  By 2021, these class size caps will be further reduced by one. (All these caps lower than current UFT contract  that hasn't changed in 50 years.)  The OEA union summary of the agreement is here; the entire agreement is here; separate chapters are here.

Wednesday, the UFT announced the beginning of an expedited process to resolve class size violations in five high schools where violations had been chronic: Benjamin N. Cardozo High School, Francis Lewis High School, and Academy of American Studies, in Queens, and Leon M. Goldstein High School and Secondary School for Journalism, in Brooklyn.  Chalkbeat wrote about this here.
This process was negotiated as part of the new UFT contract and is supposed to accelerate the lengthy and often ineffective way that excessive class sizes in schools have been addressed in the past, especially where violations have repeatedly occurred over the years.  The UFT press release  says the grievances will be referred "immediately to arbitration and the arbitrator’s decision must be implemented by the DOE within five days.”
Yet neither Chalkbeat the article nor the UFT press release provides any information about how many other NYC public schools in addition to these five schools still suffer from class sizes over the cap. What the UFT did say about all these other schools was this:
In addition to the expedited process for chronically overcrowded classes, the UFT will be working with district superintendents and the citywide Class Size Labor Management Committee to resolve oversize class complaints in other schools. Any schools where class size issues are not resolved by this process will be eligible for arbitrators' hearings, with the additional requirement that arbitrators' remedies must be implemented within five school days.
The class size caps according to the UFT contract are listed here:
Kindergarten: 25 students contained
Grades 1-6 in elementary schools: 32 students
JHS/MS: 33 students in non-Title I schools; 30 in Title I schools.
HS: 34 students.


Coincidentally, on Friday, the DOE released the audited Oct. 31 data for class sizes this fall, citywide, by district and by school.   When the law requiring DOE reporting was first passed over a decade ago, in part because of our advocacy, we pushed for two reporting periods, once in the fall and once in the spring, because we knew that high school classes were reconstituted in the second semester and we wanted to have a handle on those class sizes as well and try to provide pressure for them to be lowered as promptly as possible.
Unfortunately, the DOE interpreted the law another way and after releasing the Oct. 31 data on Nov. 15, uses the Feb. 15 date to release the same basic data from Oct. 31, now just audited, rather than class size data from the  second semester.  The City Council has never challenged them on that interpretation.
Anyway, over the weekend we looked at the just-released audited fall data two ways, one assuming the Title I middle school cap of 30 pertains, and the other way assuming the non-Title One middle school cap of 33.  (About 83% of NYC public schools receive Title one funds, according to this DOE budget allocation memo – yet I don’t know of any middle schools where teachers grieve class sizes between 31-33; parents/teachers, please correct me if I’m wrong.)
The audited data shows that as of Oct. 31, there were 49,442 students in 1,311 classes that violated the class size limits,  assuming non-Title one caps of 33 in middle school:

Assuming the smaller cap of 30 in Title one middle schools, there were more than twice as many violations in grades K-8, for a total of 67,656 students in 1908 classes:

The Oct. 31 audited data also shows that the largest percentage of violations occur in Kindergarten (affecting 7% of students) and middle school (5%-7% of students, assuming a cap of 30).


An article from the UFT newspaper dated Nov. 1, 2018 cites figures showing 401 schools citywide and 2,056 classes were out of compliance as of the 10th day of school this year, which was September 18. The same article also reports a class size cap of 30 for middle schools.  Assuming this limit to be true, only about 150 classes out of more than 2000 were brought into compliance between Sept. 18 and Oct. 31. I would guess that most of these schools did not lower class sizes after Oct. 31, but do not know for sure since neither the UFT nor the DOE report on this data.
In any case, these class size caps are far too large, and haven’t been lowered in over fifty years since the days of Albert Shanker, who was able to negotiated both salary increases and smaller classes, although  now of course we know far more about the tremendous benefits of class size reduction for student and teacher success.
Though the UFT did not negotiate smaller caps in the new contract (according to teacher Arthur Goldstein because the “DOE told us point blank they had no interest in that”),  as a result of the recent Los Angeles strike, LA teachers won both higher salaries and smaller class size caps, as well as a resolution from the school board calling for a moratorium on charter schools.

Yet the LA class size caps were originally far larger than those in NYC.  Moreover, there was a clause in the contract allowing the district to ignore the caps completely by claiming “financial necessity”, they had claimed nearly every year.  Thankfully, the union also managed to eliminate that clause in the new contract.
After a strike at four Chicago International Charter Schools was settled last week, those teachers won higher salaries and smaller classes, including class size caps of 30 at all three of the chain’s high schools, significantly smaller than the UFT high school caps of 34.
Oakland teachers have announced they too plan to strike on Thursday, and among their demands are both higher salaries and smaller class size caps.  The fact-finder report proposed that Oakland teachers should get both, and “that lower class sizes will improve teacher retention and educational outcomes.”
While Oakland teachers are demanding caps be lowered by two students per grade, the fact-finder instead recommended a decrease in one student per class “to be fully implemented by July 2020, with 20% of schools having an implementation date of July 2019. The intent is for implementation to happen first at the highest-needs schools. I also recommend that the parties form a joint class size reduction taskforce. This task force will be charged with looking at ways to fund further class size reductions to be implemented by July 2021.”
The fact-finder report also disclosed the current class size caps at Oakland schools: Kindergarten classes at 27; 1st-3rd at 30; 4th-6th at 31; 7-12 at 32 in most core subjects – smaller in every grade except Kindergarten and middle school than NYC, assuming Title one middle school caps of 30. The Oakland fact-finder also agreed with the union that there should be financial penalties imposed on the district for violating these caps.
Class size caps in Florida schools are smaller yet – as a result of a referendum in 2002 that amended their state constitution.  No more than 18 students per class are allowed in prekindergarten through grade 3; 22 students in grades 4 through 8; and 25 in high school classes.  Though schools are provided with flexibility to some degree, especially in elective and AP courses, the vast majority abide by the caps according to the official state reports.  Charters and public “schools of choice” are  allowed to meet these figures through school-wide average figures rather than classroom caps.
As the Tampa Bay Times reported last month,
According to the Department of Education, only 474 of 18,755 traditional classrooms missed the mark in the fall count — most of them in Polk and Hendry counties. …Even districts using a more liberal rule that lets them apply averages to their “schools of choice,” a program implemented by lawmakers in 2013, had slightly increased problems. This fall, 18 of 2,873 “choice” schools — 0.6 percent — violated the rules of 18 students in K-3 classes, 22 in grades 4-8 and 25 in high school.


The Florida class size caps have  led to nearly ideal statewide class size averages , as shown in the data for the 2017-2018 year of 15.5 students per class in preK-3rd grade, 17.8 students per class in 4th-8th grade, and 18.6 students per class in high school. In 2002,  then-Governor Jeb Bush confided to state legislators he had “devious plans’ to eliminate the class size caps, and various members of the Legislature have tried to scrap them over the years, but they have been unable to do so because of their huge popularity among parents and teachers.
In any case, we shall see if Oakland teachers, like Los Angeles and Chicago charter school teachers before them, achieve both salary increases and reductions in class size.  I will be rooting them on and crossing my fingers that they do.
Posted by Leonie Haimson at 2/18/2019 08:28:00 PM

Class sizes in FL are.not as ideal as this article implies. They find ways around d it all the time, and electives like Theater or Gym otlr Culinary have 50-60 students in them. I dont think parents realize this.