Requiem for the Renewal schools: What a sad waste of time, money and human lives. 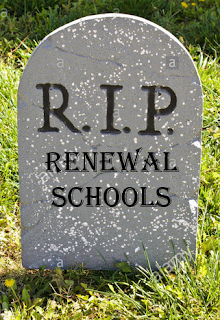 Yesterday, the Mayor and the Chancellor Carranza announced an end to the Renewal program, which has cost the city $773 million since 2014. Since that time, of the 94 schools put on the list by Carmen Fariña, nine schools have been merged with other schools, 14 schools have been closed, and 21 schools have improved enough to be renamed “Rise” schools. Fifty schools remain in the program.

While Schools Chancellor Richard Carranza said that the Renewal plan an “absolutely appropriate” attempt to address problems “that no one has solved at 100 percent,” I was quoted in the NY Post this way:

Leonie Haimson, founder of the Class Size Matters advocacy group, said, “I feel like I’m watching the same movie for the 1,000th time,” and added that de Blasio’s “approach is just to continue with the same BS.”

“Unless you address these out-of-control class sizes, nothing is going to change,” she said.

The comments made by the Mayor de Blasio and the Chancellor yesterday, and the report released at the same time, provide contradictory and confusing information about whether the program has been successful or has failed, and what if anything will now be changed.

According to the document's properties, the report was written by Greg Anrig, who was formerly at the Century Foundation and is now a “ Content Strategy Manager” at the DOE, whatever that means, according to his twitter profile.

In a NY Times interview, de Blasio admitted the original Renewal plan had been flawed:

“I’m at peace that with the information we had and the structure we had at the time, it was a sensible approach,” he said. But he added, “I would not do it again that way.”

Yet the report itself claims that the Renewal schools have made significant gains in test scores, suspension, attendance and graduation rates than the average NYC public school.

The new DOE report also asserts that education officials have learned important lessons about the flaws of their previous strategy and now know far better how to address the problems in these school. Yet it remains unclear exactly how.

The report describes an “adjustment” that has improved their data system:

Strategic data analysis from the educational non-profit organization New Visions for Public Schools evolved from a fairly rudimentary spreadsheet tracking student attendance and credit accumulation for high schools to much more detailed, real-time analyses of test scores, discipline issues, and other actionable information for each student.

This “fairly rudimentary spreadsheet” was sold to DOE by New Visions for more than two million dollars in July 2015, and was described this way at the time: 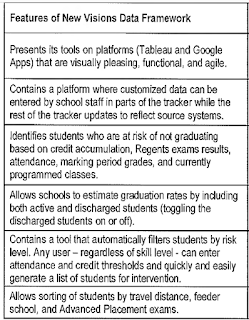 The Data Framework will address the urgent, unique, and complex needs of Renewal Schools. The $2,034,633 cost covers New Visions program administrators who provide back-end technical data assistance that cannot be replicated by DIIT, as well as a "train-the-trainer'' model for school support organizations, including borough field centers and superintendents. This model builds schools' capacity to analyze data differently, including monitoring trends across the school and managing individual students' cases.

In 2015, Anrig wrote a report for the Century Foundation entitled Lessons From School Improvement Grants That Worked that make many of the same points that are in this new report – that “turning around” schools can best be achieved through a longer school day, data-driven collaboration; safe and orderly school environment; etc. etc.

The new report does appear to subtly critique the previous use of outside expensive consultants– one of the most criticized aspects of the Renewal program, along with the increased bureaucracy.

Yet  neither the previous plan nor the new one mentions the one reform that would really transform the classroom and improve the opportunity for success for both students and teachers in these schools ---reducing class size.

A year ago yesterday, I testified to the City Council about how every year since 2014, the DOE had promised the NY State Education Department they would focus their class size reduction efforts on the Renewal schools, as part of their required annual Contract for Excellence (C4E) plan. Here is an excerpt from this fall’s C4E proposed plan:

For the 2018-2019 school year, the DOE will continue its efforts to reduce class size…in the following ways:
Yet no details were ever been given about how their class size “efforts” would be funded or directed, and never has DOE followed through on this pledge.

This year’s class size data reveals that more than one third, or 36 percent, of the remaining fifty Renewal schools have not lowered their average class size by even a fraction of a student since 2014.  The average reduction in class size of all the Renewal schools since 2014 has been is only 0.7 – less than one student per class.

None of the Renewal schools capped class sizes this fall at the original Contract for Excellence goals of  20 students in grades K-3, 23 in grades 4-8, and 25 in high school.  Nearly three quarters (74 percent) have maximum class sizes of 30 or more.

In my testimony, we explained that those Renewal schools that did offer small classes were far more likely to have improved achievement, attendance and graduation rates, as measured by their impact ratings on DOE’s school performance dashboard, which controls for student background.