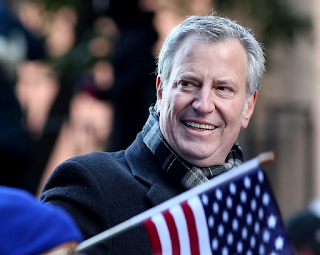 Today at the NY Supreme Court, a hearing was held on our lawsuit vs the redactions of 2015 City Hall decision memo which discussed and memorialized the decision of the Mayor and his top aides to reject several recommendations of the Blue Book working group on how to revamp the school capacity formula.  In particular, the Mayor rejected the group's proposal to align the formula with smaller classes -- which would be important if he or any subsequent mayor decided to significantly reduce class size as de Blasio had in fact promised to do when he first ran for Mayor.

On April 10, 2016, I submitted a Freedom of Information request for the decision memo from the Mayor's office about their decision to accept or reject the thirteen recommendations of the Blue Book Working group . This working group, appointed by the Chancellor and co-chaired by Lorraine Grillo, the head of the School Construction Authority and then-CEC 2 President Shino Tanikawa, made several recommendions in December 2014, including that the DOE should align the school capacity formula to the smaller class sizes in their original Contract for Excellence class size reduction plan

The City sat on these recommendations for more than six months, and finally in July 2015, in the middle of summer, announced that they would accept seven of the 13 but reject six others, including what several members said was the most important one: the one related to the goal of reducing class size.  There were several articles about this rejection, including in Chalkbeat and WNYC Schoolbook , DNAinfo, and on my blog here  and here.

It took more than two years after I had FOILed it, but in August 2017 I finally received the decision memo - 8 pages long and almost completely redacted.  See below. Interestingly, it was signed by all the Mayor's top staff except for the DOE Chancellor Farina or the President of the School Construction Authority Lorraine Grillo.

Because it was the middle of summer I missed the statute of limitations for an appeal, but at my request, fellow Kids PAC member Brooke Parker FOILed the memo as well.  When she received the same document with the same eight pages of redactions, she then appealed the redactions to the Corporation Counsel without success.  Finally, she filed an appeal in court, on July 17, 2018, with the help of Laura Barbieri of Advocates for Justice.

Generally speaking, inter-agency materials are exempt from FOIL; but according to the NY Public Officers Law they are FOILable if they  reflect a "final agency policy or determination" as this memo did; or include "statistical or factual tabulations or data."  I imagined that in eight pages of discussion of issues as technical as school capacity, utilization, class size, how many cluster rooms to allot to each school, etc. that at least one or two facts must have been mentioned.

This afternoon in court, after a brief discussion during which Laura explained  what the Blue Book was, and why the decision to reject the proposal to align the school capacity formula with smaller classes was a matter of importance and public interest, Judge Arthur Engeron of the State Supreme Court heard from the City's attorney who argued that this document was not a "final agency determination" but a "predecisional memo"  because the Mayor could have rejected the decisions within it - even though the Mayor did not.  He also claimed that there were no facts or data cited in the eight pages of discussion that were blacked out.

The Judge then asked for a copy of the unredacted memo and went back in his private office with his law clerk and intern to peruse it.  When he came out about a half hour later, he said he would reject our claim, because the memo did not necessarily reflect a "final agency policy or determination" but simply the advice of his top staff.  Moreover, he reported that there were no facts or data included in the memo's eight pages, but only opinions related to politics and discussion of how the public would react to these decisions.

This was quite astonishing and in my mind, an indictment in itself.  Even as the state's highest court ruled that NYC students' constitutional rights depended on a sound basic education which in turn, would depend upon smaller classes, and even as one would assume decisions on a school capacity formula would rely on analysis of data, the Mayor's staff did not even mention any facts or figures in their deliberations, but merely political considerations.

This is further evidence of just how empty of substance many of the education policies of this administration have been and should give potential supporters of de Blasio's Presidential campaign pause.

This should be the end of de Blasio's political career.