Using data from the DOE’s annual school utilization report from 2017-18 school year, otherwise known as the Blue Book, the author Riley Edwards concluded there were 618 overcrowded schools lacking about 96,000 seats. Building new schools is expensive and slow, and rather than rely purely on new school construction to address overcrowding, they made several useful proposals.

I agree with two of the proposals: School re-zonings should be undertaken far more frequently by DOE, especially when two or more adjacent elementary schools diverge radically in terms of utilization rates. The report’s author estimates about 16,000 additional seats could be obtained in this manner.

And since DOE completely controls the enrollment process at most high schools (only 22 of 432 high schools are zoned, according to the report), far more effort should be made to equalize high school overcrowding across the city, which the author estimates could add about another 31,000 seats.

I would slightly amend the latter proposal to suggest that it is especially important to cap enrollment at struggling high schools to be able to lower class size in these schools. It is especially outrageous that certain high schools that have been on various “failing” lists over the years, including most recently the Renewal list, should still remain so overcrowded: for example, Long Island City HS (at 108%) and Flushing HS (at 137%).

Two of the CBC proposals, though, are unrealistic and/or inadvisable. Since many middle schools are rated as underutilized, they suggest creating new elementary schools to be co-located with middle schools. It is far from ideal for elementary kids to share space with middle school students, for educational and social reasons. More importantly, the creation of more co-located schools is not a good strategy, since they are costly in terms of extra staffing and eat up classroom space with the need to add replicated administrative and specialty rooms for each new school.

The next proposal made in the report seems to admit to the inefficiencies created by co-locations: the authors suggest requiring co-located schools to share administrative spaces, such as principal offices, to free up more space for classrooms. This is unrealistic. One cannot expect an administrator of one school to share his or her office with an official from another school; moreover, this would create all sorts of privacy issues and potential violations of FERPA. It would be especially unworkable in the case of the hundreds of charter schools that now share buildings with our public schools.

The report also suggests putting more schools on split sessions - which is already used by 42 overcrowded high schools and has negative impacts on the ability of many students to participate in sports, clubs and other after-school activities.  This method should only be used as a temporary stopgap method, in my opinion.

An overarching weakness in the report is it does not really address the issue of future enrollment growth. While it states that overall, the DOE projects citywide enrollment decline, this ignores two critical factors: The DOE and their consultants have often been wrong in their predictions of enrollment decline in the past, and even now, their projections show continued increases in many neighborhoods, especially in Queens and Southern Brooklyn, which cannot be addressed via re-zonings because most of the elementary schools in these areas are already overcrowded.

Thus the actual need for seats is likely to be more than the 96,000 shortage the report now assumes, and will likely take a more aggressive capital plan to address. It doesn’t help that the DOE removed any assessment of current or future seats needs from the new five-year capital plan released last year, for the first time since 2011, even as the City Council and advocates had urged them to provide a more detailed explanation of how they make these assessments.

If one assumes the need for smaller classes than the school utilization formula now assumes – especially in grades 4-8, where the formula assumes classes of 28 students per class and in high school, which assumes 30, the need for even more school space is even more clear.

One more thing: we did an analysis of the seats built under Bloomberg vs de Blasio, and found that during de Blasio's first term, the School Construction Authority created fewer school seats than in any of Bloomberg’s three terms, and will likely build even fewer during his second term. See below chart, using data collected from Mayor Management Reports and the new five-year capital plan. 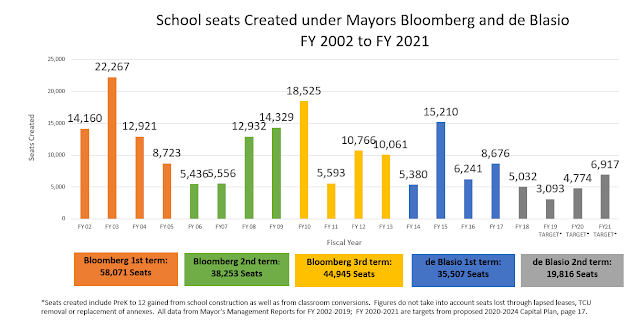 The CBC report has a slightly different chart but shows much the same trends.One caveat: none of these figures include the many school seats lost annually, as we pointed out in our 2014 Space Crunch report, due to lapsed building leases, the elimination of annexes and/or removal of trailers. The number of seats lost have been considerable in number --with many thousands of seats lost annually, and yet this figure has never been reported on or accounted for in any capital plan by either administration.

Our more recent 2018 report, The Impact of PreK on School Overcrowding in NYC: Lack of Planning, Lack of Space, pointed out how more than 350 elementary schools in 2016-2017 became even more overcrowded as a result of de Blasio’s rapid and often haphazard expansion of preK and 3K -- which should also have led him to finance a more aggressive capital plan but didn't -- further diminishing the educational experiences of more than a quarter million students in grades K-5.
Posted by Leonie Haimson at 7/10/2019 04:08:00 PM