UPDATE:  Late on Friday, the DOE released its more detailed plan for school reopening -- submitted to the State Board of Health.
Rather than the DOE's current plan for "blended" learning for all students whose parents want them to attend school, Council Education Chair Mark Treyger released a proposal about how the DOE should focus in-person instruction on elementary school students and those with special needs, English Language Learners and living in temporary housing.  This makes sense as especially as children under ten are believed to transmit Covid  less effectively and these students generally do worst with remote learning. As he pointed out, if most middle schools and high school buildings are to be closed with their students engaging in full-time remote learning, then younger students could be provided with more classroom space in those buildings.
Public Advocate Jumanne Williams came up with a similar plan, but with more emphasis on funding and outside learning.  Both Treyger and Williams also advised delaying any reopening to later in the fall to allow for more planning time.  I was quoted in El Diario generally in agreement with these ideas, but concerned that if we delay further, infection rates may rise later in the year.
Then the city came out with a  complex rubric and protocol for individual school closures if Covid emerge among students or staff, and the Mayor just announced that if the positivity rate citywide increases to 3 percent by early Sept. he will not open schools at all, while the Governor's metric for school closing is 5 percent.  To make things even more complex, NYC's current COVID positivity rate is 1.1 percent according to the state and 2 percent according to the city, with their figures differing for unexplained reasons.  UPDATE: As of Aug. 3, the state and city rate for NYC's positivity rate have converged at 1 percent though they may diverge in the future.
Michael Mulgrew, President of the UFT, said that none of these precautions are sufficient as far as he's concerned:
"We need randomized testing of school communities throughout the year and a vigorous contact tracing system that gives schools test results and a course of action with a 24 hour turnaround. What's more, even if there are stronger safety standards in place, we still have grave concerns about the city's ability to enforce them in every school. Right now, this is not enough to protect students and staff."
Mark Cannizzaro, head of the the principal and administrator's union, was only slightly less critical: 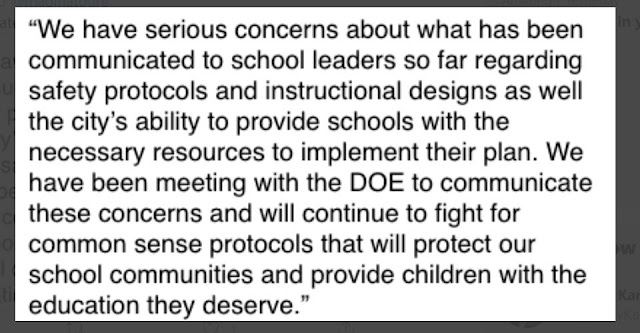 And parents have to decide by August 7 if they choose to have their children to stay home  and learn via remote learning 100% of the time.
Below are former Superintendent Matt Bromme's comments on Council Member Treyger's plan:
__________

The Councilman has proposed several good ideas that may or may not come to fruition.  I agree with him regarding the delaying of the opening of the schools.  We have too many staff members on every level who have preexisting conditions and will want to teach virtually.  We also have many students whose parents will have major concerns about sending their children into school and need to be reassured regarding health and social protocols.

The DOE has yet to address how they will have sufficient staff to cover the new day care centers, hire enough teachers to take the place of those teachers opting to do only virtual learning and where they will get the funding for salaries, benefits, supplies, books, etc. The city and state are in dire financial circumstances. Where will they get the money? As of today, I do not see a positive federal response for more funding.

There are issues with emergency drills and how students will attempt to socialize even in the cafeteria.  The early grades are even tougher.  You cannot ask Pre-K 3 and 4 year olds, as well as the other early grade students, to do the things we adults can do easily. This includes issues regarding hygiene and wearing masks all day.  This will be a great challenge.

His suggestion for synchronous learning is also a contractual issue. When first approached to teach in a distance learning system, the teachers’ union informed the teachers they did not have to do that.  There were numerous reports of students not receiving any real instruction. Therefore, there has to be a buy-in by the UFT. The DOE must ensure that high poverty communities have better access to the Internet. They must also consider how to train and use paraprofessionals to be part of the distance learning program. Paraprofessional are not licensed teachers, therefore they cannot be in charge of classrooms whether on site or in the virtual world.

The current DOE plan is unacceptable and totally lacking in so many ways.  The current plan truly hurts those families with two or more children in the school system. How does a parent handle child care issues if her children’s school schedules are in conflict with each other? What about the single parent who must work to pay bills, but has no one to take care of the child and does not make it into day care facilities?

Council Member Treyger deserves credit for at least putting ideas out there for people to comment and try to implement. However, the first day the schools were shut down, was the first day the Chancellor should have started to plan for their reopening. He and his staff should have been devising multiple scenarios in consultation with all of the communities they serve]\ I would hope as the Council Member has suggested that the opening of the schools physically is delayed so a real plan can be put forward.