Whether the budget that was just passed by the City Council was a good one or not depends on whether you’re looking at the glass half empty or half full.

According to the Council press release, they negotiated the restoration of $100 million in proposed cuts to Fair Student Funding, $11.6 million for the Single Shepherd guidance counselors, $4.8 million for 38 social workers, and $1.8 million for other social-emotional supports for students. The new arrangement also puts School Safety Agents under the authority of the DOE for the first time since Giuliani placed them under NYPD control in 1998, though Mayor de Blasio says the shift will be a gradual, two-year process.

Many significant budget cuts remain, as well as a staffing freeze of teachers and counselors, and it is difficult to know how schools will reopen safely and with adequate support to students given these conditions. See the chart below – adapted from an earlier chart from the City Council– approximating the cuts that appear to remain (aside from an extra $6.6M for social workers and other so far unspecified social-emotional supports): 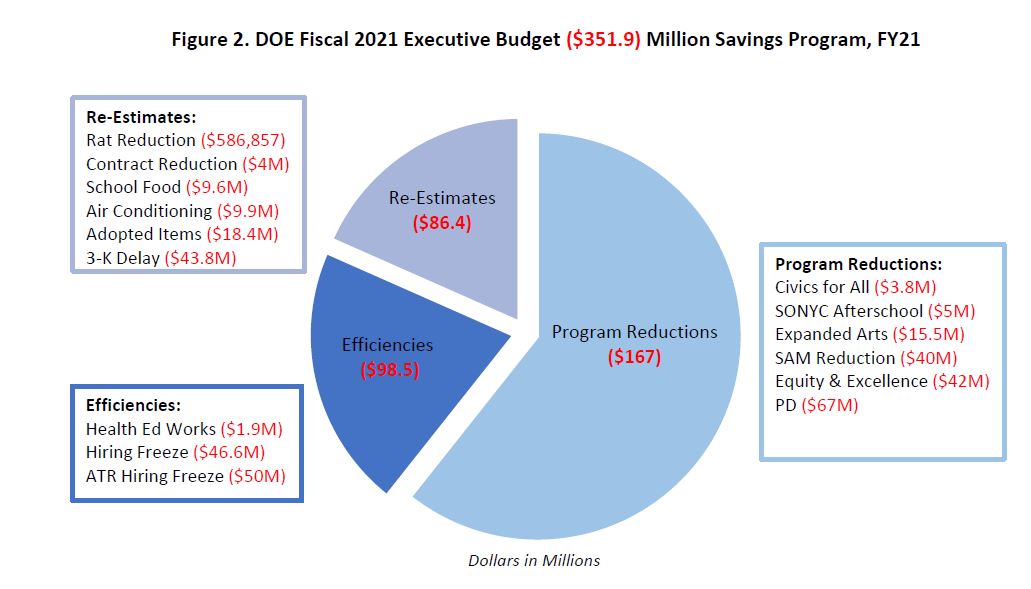 At the same time, much larger cuts of several billion dollars may occur, leading to actual layoffs if the state doesn’t receive more funding from the feds and/or doesn’t provide more aid via higher taxes on the wealthy and/or the Mayor doesn’t manage to negotiate givebacks from the unions.

And all this is happening in the midst of a pandemic which will necessitate costly measures to protect the safety and health of students and staff, no less create the smaller classes required for social distancing if schools reopen in the fall. A recent analysis from the School Superintendents Association revealed that school districts can expect to spend an additional $490 per student just to purchase cleaning supplies and personal protective equipment, as well as hire more custodial staff and nurses. That means the cost to NYC schools could amount to nearly $500 million.

Speaker Corey Johnson did mention during his press conference that they achieved some significant savings from the cancellation of the bus contracts in April, which we strongly advocated for when it appeared that the DOE was intent on going ahead with these contracts despite the fact that there was no busing happening since schools were closed in mid-March. The cancellation of these contracts should lead to savings of over $600 million, which theoretically could have prevented any cuts to school budgets and instead help pay for additional staffing and health measures -- though clearly that didn’t happen.

In any case, we have to continue pushing for the federal government, as well as state and city officials, to do the right thing for our students, rather than allow them to be endangered by educational and medical neglect.

Are all After School programs cut?