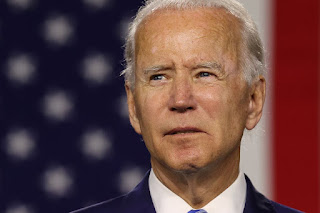 On Monday, Ian Rosenblum, appointed as Deputy Asst. Sec. of the US Dept. of Education announce
d that states would NOT be given a waiver from administering standardized exams this year – though ten states had already requested them, including New York.

His letter is here; articles in Chalkbeat  and in Diane Ravitch’s blog here.  Rosenblum’s letter does say that the tests could be shortened, given over the summer (!) or even next fall.

It is somewhat surprising and quite depressing that a relatively junior staffer would make this announcement before Biden’s choice for Education Secretary Miguel Cardona has even taken office – and in the midst of a pandemic no less.  Check out the video here where Biden promised at an AFT forum last year that he would eliminate all federally-mandated standardized testing.   Makes you wonder who is really running the show! at the Dept of Education.

Or perhaps not.  Ian Rosenblum, who signed the official letter, came to the US Department of Education from running the NY branch of the pro-testing outfit Education Trust, now headed by our former and highly controversial pro-testing NY State Education Commissioner John B. King.

Before that, Rosenblum was the top education advisor to the formerly pro-testing Gov. Cuomo, until Cuomo decided that this was not a popular political stance i, given vocal parent protests against the lengthy and highly flawed Common Core-aligned exams, leading to a 20% opt out rate.

Interestingly, Ed Trust spearheaded a letter just a few weeks ago, urging the US Dept of Education to reject state requests for waivers.  The letter was signed onto by many inside-the-Beltway groups that have received a minimum of $200M in Gates funding over the last ten years or so:

The push back from teachers and parents to the waiver rejection letter has been immediate and intense, saying how unfair it is to make students take these tests at this time.  Said one New Jersey teacher & mom: "Parents don't want this. Educators don't want this & scientifically impossible that these tests will yield reliable, valid, usable data. Who is being served by this?"

If states have to give these exams remotely, watch out for the unreliable and highly biased surveillance spyware schools will ask to install on your children’s devices.  Best advice is to refuse and opt out of these exams altogether.

Even our DOE Chancellor this morning said the following:

Carranza this morning, when asked what sort of state tests would be feasible at this point in NYC: "As an educator I would say to parents, there is an opt out. And if there is ever a time to consider whether that opt out makes sense for you, this is the time."

Instead of mandating standardized testing, the Biden administration should focus on getting all teachers vaccinated as soon as possible, as this oped convincingly argues.  Biden has said that teachers should be prioritized for the vaccine, but he has left this up to states to decide on how this would be achieved and over what time frame. This is a mistake.

The evidence over whether it is safe for all teachers and students to attend schools in person at this time is contradictory and confusing, and different people have understandably different estimations of the benefits and risks involved.

But two polls have come out in the past week, one from Morning Consult and the other from Pew, showing that the majority of voters believe that teachers should be vaccinated before schools are re-opened in full.  Morning Consult found that 55% of voters held this view: 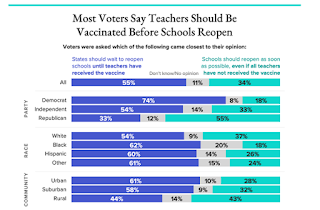 Pew’s results were even more resounding, showing that 59% of voters say that reopening schools should wait until all teachers who want the vaccine have received it: 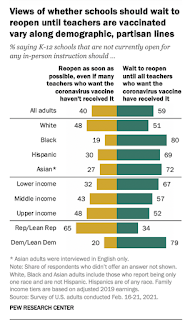 Here in NYC, though teachers are on the huge priority list to be vaccinated,  thousands of teachers and other school staff are still on waiting lists, according to a statement put out yesterday by the UFT :

“The UFT represents more than 120,000 teachers, guidance counselors, paraprofessionals and other school-based members. Even putting the most positive spin on the city's numbers, there are tens of thousands of staff who have not yet had access to the vaccine," said Michael Mulgrew, president of the United Federation of Teachers.

As of this week, the UFT vaccination program has matched 23,000 UFT members who want the vaccine with health care providers. Based on the number of doses the providers have had available, roughly 8,000 have already been vaccinated. We do not receive names, only total tallies, of those who received an appointment through the UFT program.

We have encouraged our members to also apply for vaccines through other city and state sources.  We have no way of knowing how many have been successful in getting vaccinated through these sources.

The Mayor claimed yesterday that about 30,000 of the DOE’s 120,000 total school staffers have now received the COVID-19 vaccine via the city program.  Even assuming this figure is accurate, it clearly isn’t enough.

The Trump administration sent separate shipments of vaccines to pharmacies that were supposed to be used  in an expedited fashion exclusively for nursing home residents, to ensure that they would be vaccinated as soon as possible; why couldn't President Biden do the same for schools?

For the sake of our teachers, our students and schools, not to mention his own popularity, Biden should make this his mission, instead of requiring that students take stressful and pointless exams that will yield highly unreliable and inequitable results, especially during the current crisis.

Yes, I too believe this.