Risk of Covid worse in crowded lunchrooms; and in many overcrowded schools lunch already starts at 9:30 AM 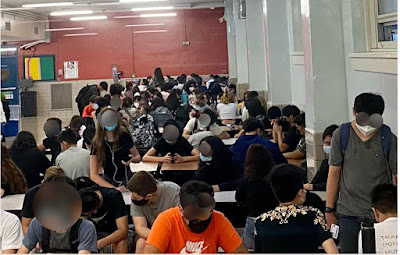 One of the most concerning risks of Covid transmission will take place in the cafeteria or other eating spaces, because students have to take their masks off to eat, often in very overcrowded conditions.  That's why NYC is now requiring proof of vaccination for anyone eating at a restaurant indoors.  Sadly, no vaccination is required for any student, even those 12 and up who are eligible.

In a Chalkbeat article on this issue earlier this month, the DOE advised the following:

In New York City, officials with the education department recommend that schools use outdoor spaces or other large areas for meal times, and to start lunch earlier or later so fewer students are in the cafeteria at once.

Yet the proposal to start lunch earlier ignores how many overcrowded schools already start lunch very early. In Feb. 2019 an article in City Limits pointed out in some schools, students were forced to eat lunch as early as 9 AM.

Despite DOE promises to improve the situation after the Daily News and WNYC had posted data listing 75 overcrowded schools where lunch was served before 10 a.m. five years before, these early lunch periods still occurred at 41 of the 75 schools. Three schools had closed and 21 others served lunch between 10 a.m. and 11 a.m.

A few months after the Daily News article appeared, Mayor de Blasio promised to take action: "That has to change. It's unacceptable. I'm a parent and I can say parents don't want to see that for their kids,"

It's impossible to check to see if the situation has improved, as the data on lunch times is no longer on the webpage where it once existed. Peter Fois of the DOE Office of Food and Nutrition Services emailed me that updated info may be posted in mid- to late-October.

Yet you can take a look at a list provided by City Limits of the schools that had exceptionally early lunch times in 2014 and still did in 2019 here.  I doubt it's changed much since then.  There is also a list by school of how many lunch periods they schedule per day, as required by Local Law 60-2011, but there's no data posted since 2018-2019.  City Council sent me a copy of the report for the 2019-2020 school, and I sorted the tab entitled "meal periods" by the number of  lunch periods for each school per day.  Though it's hard to interpret the time that lunch is served from the data, one can assume that the more periods a day, the earlier lunch starts and the later it ends. John Adams HS in Queens was the worst, with eight periods of lunch a day.

Of course, the problem is generally made worse by the number of co-located schools in the same building, which not only increases overcrowding overall but makes scheduling lunch far more challenging, since each school wants its own dedicated time in the cafeteria.  I wrote about how the DOE has continued to co-locate schools throughout the pandemic in our  testimony to the Council on Sept.1.