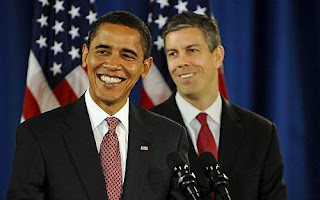 In today’s Christian Science Monitor , an unusually skeptical article points out that Arne Duncan made his reputation on the so-called “turnaround schools” in Chicago – schools that were provided to private managers or charter school operators to restaff and restructure – but supposedly improved results dramatically, while keeping their original student body intact.

“The district closed, replaced, or overhauled the management at more than 60 low-performing schools. But … only a small percentage of students displaced by school closings ended up at the new and improved schools. Many landed at other schools that were on academic probation."

Obama made the announcement this week about Duncan’s appointment while standing in one such Chicago school, the Renaissance Dodge Academy that has been much praised by Obama and others for improvements in test scores. In fact, the principal was invited to testify before the House education Committee in May 2007, presumably because the school had the largest test gains of any school in Illinois in 2006.

See this 2007 letter that Julie Woestehoff of PURE sent to Rep. George Miller, chair of the House Education committee:

It’s important to know that the Dodge Renaissance Academy provides three instructors in every classroom, an expensive luxury made possible only by generous private funding that is not available to traditional schools. In addition, the Chicago Public Schools’ own data show that only 12 students who attended Dodge in 2002 (the year CPS closed the school) were still enrolled at the restructured Dodge in 2005.

The new school is essentially serving a completely different student body. It simply does not operate on a level playing field with other schools, and its results should be considered in that context. (emphasis added.)

AUSL (for Academy for Urban School Leadership) , which is the management group that took over the Dodge Renaissance Academy, subsequently took over another Chicago school and renamed it “Sherman School of Excellence”.

Sherman’s improved performance has been hyped in the same fashion as Dodge’s was previously. In general, this trend has prompted growing complaints from parents and students, as reported in the Chicago Sun-Times, that many of these turnaround schools are "destroying'' neighborhood schools by luring away high-scoring kids, or flooding them all their low-performers.

According to a recent post by Julie, here is a summary of the stats at Sherman since AUSL took it over:

Her analysis echoes Eduwonkette’s who has argued (for example here and here) that the new NYC small schools have far different student bodies than the large, failing schools that they replaced – with fewer special ed, ELL and other high needs kids.

At the same time, the small schools offer smaller classes and more personal attention. Why should anyone be surprised that if you take higher-achieving kids, and put them in smaller classes, they will do better than high-needs kids in overcrowded classes?

Not to honk my own horn, but I made these points more than three years ago, in a brief report presented to the Panel on Educational Policy in November 2005, and later in testimony before the City Council.

Should Arne Duncan or Joel Klein be lauded for such accomplishments? Especially when Klein resists with every bone in his being from offering the same opportunities to students in the rest of our schools? What do you think?

Can someone please check out the Peninsula Academy Preparatory Charter School on Beach 67 Street Rockaway Queens. It is open now while surrounded by construction. The Large Poster advertising the school states that it is part of the Averne by the Sea development.Can the developers be the Charter?? The city has promised a YMCA for the community way back when this development began. Can someone delve into this school and the folks behind this. Interestingly, the DOE has announced the redesign of PS 225 a few blocks away. Sounds fishy by the sea......

According to Julie Woestehoff, it's true that Dodge is not a charter school, it's a Renaissance 2010 "contract" school run by a private management company on a five-year
contract.

"However, there is no real difference between Dodge and a
charter - it's just that CPS has to call schools something else because of Illinois's charter cap."

In any case, I will change the text accordingly. thanks for alerting me to this.