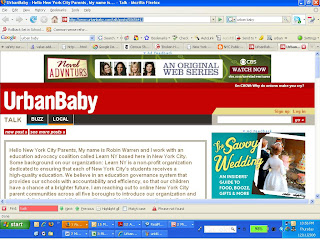 Gotham Schools tells how Robin Warren, an employee at Learn NY, the organization set up by Bloomberg to maintain Mayoral control, has been introducing herself on various NYC parent list servs and saying that the organization is really, truly, sincerely interested in hearing their views.

Within eleven minutes, here were the first six replies:

· You're shilling for Bloomberg? How much is he paying you?

· What is your qualification?

· Ladies, this is a political organization (non-profit in name only) that was created to influence NYS to reauthorize mayoral control of the school system. The Board members are Bloomberg hacks who do his bidding. It's a transparent attempt to influence the public debate in his favor, that's all.

· Spamming for Bloomberg's czarship of schools!

· Here's some feedback: The testing idea has gone waaay out of control and has overtaken most of the creative and "fun" parts of the school day that used to exist, school bureaucracy is terrible because there's no one who's accessible and is willing to help, and within the schools the teachers and administrators seem hamstrung by the administrative duties they have now, field trips have almost disappeared, classes are way too big and school budgets way too small so that the only really successful schools are those in which the parents have to raise enormous amounts of money, and many parents - me included - feel entirely disenfranchised at this point in the 'Mayoral Control' experiment and would not mind at all if it went away.

But Mayor Mike's flunkies only hear what they want to hear--otherwise they'd never have joined up in the first place.

WoW shares many wow gold of its features with previously launched games. Essentially, you battle with Cheapest wow gold monsters and traverse the countryside, by yourself or as a buy cheap wow gold team, find challenging tasks, and go on to higher Cheap Wow Gold levels as you gain skill and experience. In the course of your journey, you will be gaining new powers that are increased as your skill rating goes up. All the same, in terms of its features and quality, that is a ture stroy for this.WoW is far ahead of all other games of the genre the wow power leveling game undoubtedly is in a league of its own and cheapest wow gold playing it is another experience altogether.
Even though WoW is a wow gold cheap rather complicated game, the controls and interface are done in buy warhammer gold such a way that you don't feel the complexity. A good feature of the game is that it buy wow items does not put off people with lengthy manuals. The instructions cannot be simpler and the pop up tips can help you start playing the game World Of Warcraft Gold immediately. If on the other hand, you need a detailed manual, the instructions are there for you to access. Buy wow gold in this site,good for you ,WoW Gold, BUY WOW GOLD.