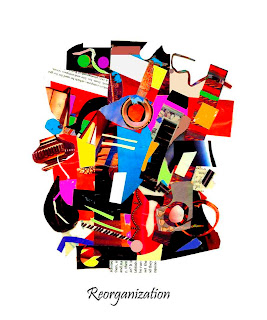 All the previous reorganizations (how many have their been? four? Five? Who can count them?) have caused nothing but chaos, confusion, and a massive waste of money. Each of them was supposed to cut the bureaucracy.

Yet somehow, the headcount (and salaries) at continue to grow, year after year.

Now, there’s yet another reorganization on the way .... but when reported this story about the latest reorganization (oh, I meant “reshuffling”) in the morning, she filed again in the afternoon, after Eric Nadelstern, the new "Chief School Officer" called back, to try to reorganize the spin on the reorganization.

If Nadelstern and all the other bumblers at Tweed really believe their own PR about giving principals the choice so they can be the CEO’s of their own buildings, they should privatize , set it up as a consulting company, and see if any of these CEOs would bother to hire them. I doubt they would – even those zombies trained at the .

I was at a CPAC meeting this morning, and guess when Santi Taveras said that the vaunted $80 million supercomputer ARIS and its data would be accessible to parents? Not until May. How many months has this been delayed?

Here is an excerpt from the Oct. 24 NY Times:

James S. Liebman, the Education Department’s chief accountability officer, said on Thursday that the project was “proceeding in an appropriate manner” and “in the way we anticipated.” He said that parents would begin gaining access to the system in December, and noted that Mayor Michael R. Bloomberg, in his State of the City speech in January, said that ARIS would be online by the fall, not September specifically.


Well, no way you can redefine May as in the fall. Except perhaps in Australia, which perhaps is the last place in the world that Joel Klein is still popular.

About the only reorganization led by that would really improve the situation is if they reorganized themselves out of existence.

The incompetency of Bloomberg, Klein, and the overpaid/overstaffed gang at the DOE is unbelievable. Please, Albany, lay the smackdown on Mayoral Control and its failing voyage.

Hooray! I've been saying this for years. Bloomberg and Klein are doing a better job than what Gen. Sherman did in Georgia.
Why will they not bring back the 600 school concept for the unruly?
We don't need a longer day and year. We need discipline enforced in the schools. Too many schools have literally collapsed since there is no discipline whatsoever in them.

Bloomberg and Klein insult the intelligence of parents who see passing grades on report cards, but notice their kids can't read or do basic math. Public schools is a social service policy not a private enterprise and cannot be run at the pace private business dirt of bribing principals to participate with the farse, pressuring teachers, firing experienced people and hiring their friends sons and daughters to be untouchables in their teaching jobs. Finally, instead of putting the money in direct services for children, Bloomberg hires more supervisors who do nothing, including not answering the phone for parents.