DOE administrators: high salaries and how many there are! 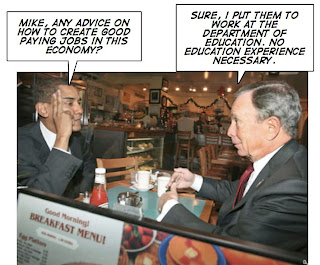 Philissa at Gotham Schools, bless her heart, has posted an excel file with all the salaries of DOE administrators, derived from a searchable database of employees on SeeThroughNY.net,.

What’s most interesting is how many administrators there are – including hourly workers: 11,796! More than 10,800 are listed with annual salaries.

Talk about a huge bureaucracy. This makes all the exposes of the growing head counts at (like this one at Eduwonkette from last May, or Juan Gonzalez more recent column here ) look like bupkis.

Update: readers have pointed out that not all these administrators are at Tweed; some may be necessary support staff in schools. But principals are not included here either, and there has been a big increase in the number of principals resulting from all the new small schools created by the Bloomberg/Klein regime.

How big is the DOE? I have in my head that there ar 40,000 teachers, but the UFT says that it represents 74,000 teachers and total of 200,000 people. And the NYC education budget is something around $10 billion dollars.

So, how much should the head of such an organization make, if its located in New York City? And the next level down? And the level below that? Let's say that 10 people report directly to Klein, and 10 report directly to each of them. That's 111 people right there. Are these numbers salaries outrageous for that level of responsibilty and -- we would hope -- expertise?

(Whether these are the right people in these jobs is another question, one on which we would probably ageee.)

But the real problem have with this post is the lack of context. 11,796 administrators is a lot, but it is a it anything like too many? That's something like 1 administrator for every 100 kids, right? Is that crazy? I don't know. Can yo put this in some kind of context? How does this compare to other big ditricts? How does this compare to other local districts?

These raw numbers aren't really any more meaningful than the kinds of numbers the DOE throws out to "prove" how well it is doing. Numbers without explanation or context don't really mean anything.