Another ridiculous report from the corporate reformers on HS "choice" 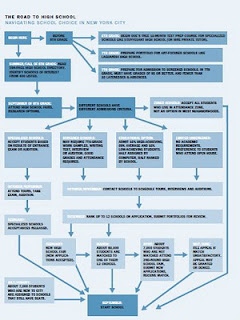 It is true that NYC has hundreds of new high schools, with a catalog so thick it resembles the phone book.

Yet this report ignores that there is nothing more despised by NYC parents than the demanding and complicated HS "choice" process, as reported on in many places, including here.

See also the chart at right from the excellent New Schools study, The New Marketplace, which shows how ridiculously complex the process is.

It also doesn't mention how  many of the new schools  have no record of success and indeed several have already landed on the failing list.

The Brookings report also fails to mention the fact that over 8,000 NYC students were rejected from all of their top 12 high school choices last year.

Finally, it ignores the reality that once a student is accepted to a high school, DOE has made it almost impossible to transfer out, no matter how unhappy the student and inappropriate the placement turns out to be, as reported on here.

Some system of choice!  DOE would do better to focus on improving and supporting the high schools we have, so that every 8th grader can be guaranteed a seat in a good high school, rather than continuing to spin off new high schools each year with little or no attempt at quality control, no place to put them, and no guarantee that NYC students will end up in a school that offers them a decent education.
Posted by Leonie Haimson at 11/30/2011 12:00:00 PM

It is not only the high school process that is overwhelming,but also admission int middle schools, Students in fifth grade must put down six choices some of which they really don't know much about. Some receive their fifth or sixth choice and are placed in a school totally inappropriate for them.
WE now have an enormous amount of mini-schools,sometimes four or five in the same building. However,we now need more administrators at these schools at huge salaries while the improvement is minimal.

Middle school choice/admissions situation is atrocious. High schools choice/admissions are only choice if you live in Manhattan's dist 2 and 3, save for Specialized High Schools. Perhaps Brookings Institution forgot that NYC consists of more than just two patches of Manhattan with the most expensive real estate.