What's the real story behind the threatened bus strike: are the bus drivers the enemy or part of the 99%?

The real facts behind the threatened school bus strike are difficult to untangle.  As the NY Times explained today, the mayor's position is a reversal of his previous one: 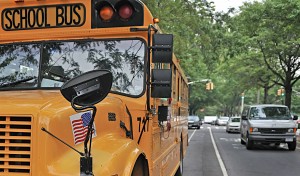 The specter of a strike is an interesting turn of events for Mayor Michael R. Bloomberg. For years, his administration had fought alongside the union to keep the seniority-based protections in the contracts, in part because removing them could have prompted the union to strike. In July, however, the city made an about-face, asking Gov. Andrew M. Cuomo to veto a bill it had helped develop that would have extended the protections to bus contracts for preschool students who receive special education services.

Mr. Cuomo did just that in September, citing a decision by the State Court of Appeals that including such protections drives up cost and drives away competition. (The protections are part of the contracts, which expire in December 2012, that govern the transportation of about 138,000 students from kindergarten through 12th grade.)


In a news conference at City Hall on Friday, Mr. Bloomberg characterized a possible strike as “illegal” and the union’s behavior as “outrageous” based on the court ruling.

See the letter, dated July 11, 2011, from Bloomberg to the Governor, asking him to veto this bill. But as is clear from a CNN article,  the Court of Appeals decision  occurred  in 2008, suggesting that the new legislation passed last year was designed  to supercede the court ruling. And according to Sara Catalinato of Parents to Improve School Transportation (see below) this Employers Protection Provision (EPP), has been in all K-12 busing contracts since 1979; it just didn't yet cover pre-K busing, which the new bill was designed to provide.
The fact that Bloomberg had asked the Governor last summer to veto a bill that would allow him to ensure union protections for pre-K bus drivers in new contracts was conviently omitted from  his most recent message to the public -- as well as most of the news articles -- in which he falsely claimed that seniority protections were something that would be illegal, without mentioning that he had worked to ensure that they remained so.
It now appears that the city is willing to spend millions to break the bus drivers union, as they have attempted to break the teachers union and the school aides union previously.  This is revealed by the fact that in the midst of huge budget cuts to schools, they have now spent $1.3 million in advance for student Metrocards, daring drivers to strike with winter approaching, even though the existing contract does not lapse until July:
The city’s Education Department spent $1.3 million buying 300,000 MetroCards to give to students who are picked up at bus stops and to parents whose children might need an escort to school because they are disabled or too young to ride the subway on their own. Parents who drive will be reimbursed based on the number of miles traveled, while those who use another type of private transportation can turn in receipts for reimbursement.
Of course, most NYC parents cannot afford to hire private transportation for their disabled children, even with the promise of future reimbursement.
As Sam Pirozzolo of Staten Island writes, “Mayor Bloomberg would rather allow non-union, untrained bus drivers to drive our most vulnerable children to and from school.”   This daring maneuver is reminiscent of Bloomberg’s attack on teacher tenure and seniority, and his push to have new, inexperienced teachers replace seasoned professionals so that he can cut back on education spending even more.
Perhaps since he no longer intends to run for re-election he doesn't fear alienating the unions and/or the public; or perhaps the vicious attacks on unions throughout the country by right wing Governors have unleashed the Tea Party side of Bloomberg.
Though Walcott’s letter to parents said, “We are deeply concerned about the impact of a strike on your schools and school communities,” they are obviously not concerned enough. Another heedless act by a heedless administration.
Below is a message from Sara Catalinotto of Parents to Improve School Transportation, who added , “Bottom line: as OWS would say, Bloomberg is the 1%, kids and bus workers are the 99%!”
--------------------
The Chancellor's letter home is painting a picture of rogue workers trying to deny our kids a ride to school for no good reason, but our experience has been that it is the DOE's own Office of Pupil Transportation which puts both the children/families and the drivers/escorts in a bad situation every year with route cuts, unnecessarily long rides, and other abuses.
An Employee Protection Provision is something parents support because we want trained, experienced and decently paid workers handling the youngest children with disabilities.  This EPP has been in the K-12 contracts since 1979; it didn't cover pre-K only because pre-K wasn't universal at the time.  This summer, both houses in Albany passed a bill to extend EPP to pre-Kindergarten and Early Intervention busing, but Cuomo vetoed it at Bloomberg's request (see attached letter).  Nobody wants a strike, but PIST members who I have heard from today are willing to join ATU 1181 picket lines in support of a fair deal for the workers AND the kids.
We have no reason to trust the DOE to come through with carfare and  Metrocards--these are things parents often ask for in crises caused by OPT mismanagement of busing, which are routinely denied.  It would be hypocritical of Bloomberg's appointees at Tweed to suddenly find the money and staff to figure this out, now that it is a question of opposing advancement of union rights.  We contend that our children need a School Bus Bill of Rights with transportation overseen by those with the most at stake: families, educators and bus workers.
Please contact us again if you want more background documentation on problems with school busing.
Thanks, Sara Catalinotto, pistnyc@gmail.com
Posted by Leonie Haimson at 11/19/2011 07:06:00 PM