A mother's lament after learning the grades of her sons' schools 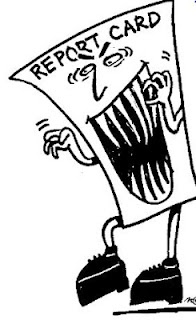 Lots more commentary and criticism of the latest school grades.  Gary Rubinstein explained how the DOE's claims of stability are an example of "how to lie with statistics" here. The NY Post pointed out that the Ella Baker school  which got a "C" had just been singled out as one of the best schools in the city by the State Education Department. An editorial in the same paper criticized the grades as being entirely untrustworthy.  Eagle Academy, which last spring was praised by Bloomberg at a ceremony at Yankee Stadium as "a model for improving student achievement." fell from the 81% percentile to to 14%,   receiving a "C"  overall and a "D" for progress.   The Daily News reported that of the seven elementary and middle schools that DOE tried to close last year -- blocked by a lawsuit -- two got "B"s and the others "C"s.  Not a single one received a failing grade.  More about why these grades are so unreliable in our previous post, Why no one in his right mind should believe the school grades.

Here is what one mom wrote, Tory Frye, after learning the grades of her sons' schools:

My sons' schools have a C and a D!  Last year was great for my older son at the "C" school and my little guy come homes from Kindergarten at the "D" school and describes the most loving, stimulating and creative environment.

My older son wrote a letter to  the [US Attorney General] Eric Holder last year about the effectiveness of incarceration of non-violent offenders as a crime prevention strategy (and got a response) and wrote a 9-page paper on Thomas Jefferson.  My 5-year old son came home the other day and said that a month is a long time because it is 4 weeks long and a week is 7 days long so that is 28 days altogether.  Oh, and he has art, music, movement and drama all year long!

The only one who believes these grades are the people like the mayor,and his cronies who know nothing about education. The sad part is that they use these ridiculous grades to harass and ruin once sucessful schools.It is impossible for the same schools grade to fluctuate so much fronm year to year.