I debated Dan Goldhaber on the radio today, on KNPR in Nevada.  Please listen to the podcast here.  Also participating was a Las Vegas reporter and deputy superintendent, as well as some great callers, mostly teachers.


Goldhaber, who works at the Gates-funded Center for Education Data and Research in the state of Washington, and predictably enough would like to focus on teacher evaluation instead as a means to improve schools, wrongly claimed the STAR experiment in Tennessee showed that class size mattered only for poor kids. Actually STAR showed ALL students did better in small classes, with poor kids seeing twice the benefit.  See this study for example:
Spyros Konstantopoulos and Vicki Chun,“What Are the Long-Term Effects of Small Classes on the Achievement Gap? Evidence from the Lasting Benefits Study,” American Journal of Education 116, November 2009:

“The results … provided convincing evidence that all types of students (e.g., low, medium, and high achievers) benefit from being in small classes (in early grades) across all achievement tests…. in certain grades, in reading and science, the cumulative effects of small classes for low achievers are substantial in magnitude and significantly different from those for high achievers. Thus, class size reduction appears to be an intervention that increases the achievement levels for all students while simultaneously reducing the achievement gap.”

Goldhaber also mistakenly said that the STAR study showed no gains in the upper grades, but STAR only reduced class size in grades K-3. No experimental studies have ever been done in the upper grades, though dozens of controlled studies show smaller classes in middle and upper grades are correlated with higher test scores, lower dropout rates, and better non-cognitive skills, like persistence and self-esteem, which are much talked about now.  See this study for example:
Thomas Dee and Martin West, “The Non-Cognitive Returns to Class Size ” Educational Evaluation and Policy Analysis, 2011 33:23.


"Results show that smaller classes in 8th grade lead to improvements in non-cognitive skills like student engagement, persistence and self-esteem that have been strongly linked to success in schools and later in life. The authors estimate that in urban schools, the economic benefits from investing in smaller classes would be nearly twice the cost."

[For more studies showing gains due to smaller classes in the middle and upper grades, see the Class Size Matters research page]
Goldhaber repeatedly argued that a “natural” experiment over the last few decades showed that class size doesn’t matter much, because as class sizes were reduced across the nation, achievement didn’t rise significantly. Actually, according to Richard Ingersoll, while elementary-level class size was reduced about 20 percent between 1987 and 2007, there was little change in class size at the middle and high school levels. 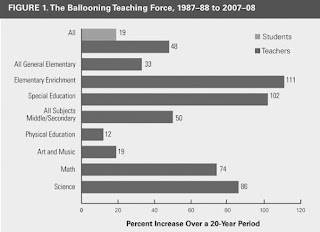 The average public middle or secondary school class was 24.3 students in 1987–88 and 23.4 students in 2007–08.  Indeed, much of the growth in teachers since 1987 was due to the hiring of more special education and enrichment teachers than general education classroom teachers.
Before that point, there were large reductions in class size that were highly correlated with achievement gains, especially among black children. Here are graphs from Alan Krueger’s seminal work, “Would Smaller Classes Help Close the Black-White Achievement Gap?” showing the narrowing of the gap that occurred between about 1973 and 1987. 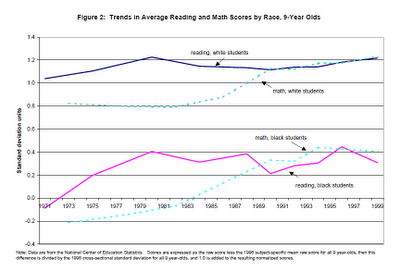 According to Krueger, the gap narrowed over this period almost exactly the amount that would be expected by the STAR studies: 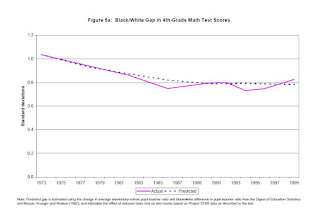 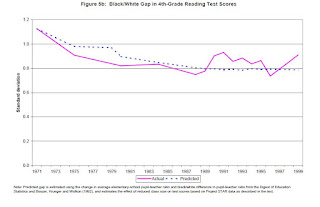 Paul Barton of the Educational Testing Service agrees that the lowering of class size that occurred nationwide from about 1965 to the late 1980’s could have been a primary factor in the narrowing of the achievement gap during this period; and that progress stopped as class size reduction levelled off in the late 1990’s:
In public schools, from kindergarten through grade 12, the overall teacher–pupil ratio was 24.7 in 1965, dropping steadily to 17.9 by 1985 and to 17.2 by 1990, for a decline of 30 percent. The ratio leveled off, with only slight declines in the late 1990s, ending the century at 16.0 in …. This meets the criteria of something that happened in the period when the gap narrowed but lost momentum in the period after the narrowing stopped….…. in recent years, classes have been larger for minority students than for White students.
Which is simply unacceptable, if you believe in equitable opportunities for students.
Anyway, if you have the time please listen to the podcast and tell me what you think below.  Thanks!
Posted by Leonie Haimson at 10/02/2012 09:58:00 PM