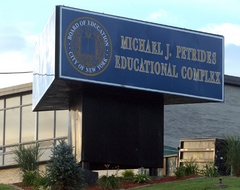 My resolution to rescind our prior approval of the tutoring services contract for Champion Learning passed unanimously.  Following the disclosure that the comptroller's office had rejected the contract due to an ongoing federal investigation even the mayor's appointees agreed to revoke our approval.  See here for text of the resolution.

Deputy Chancellor Polakow-Suransky presented an awful $19 million testing technology contract for Pearson.  The contract includes both assessment content and the assessment technology platform.  The platform includes important things like: "the capability to import and host ("ingest") content from varied and multiple sources".  You can read all the details of what we bought here.  I pointed out to Chancellor Walcott that the mayor's intransigence in refusing to agree to the evaluation system DOE negotiators had worked out with the UFT had brought us $250 million in punitive budget cuts from Governor Cuomo.  I asked the Chancellor why, if by his own estimation, the governor's funding reduction will cost our students "2,500" teaching positions and "essential" class room supplies, we should spend $19 million on unneeded testing technology.   His answer focused on how surveys had shown teachers used our current technology.  The idea that we could avoid some of those 2.500 teacher cuts by deferring this contract was not of interest to him.

During public comment we heard from Council Member Deborah Rose, members of the Staten Island CEC (District 31) and the public including a number of striking bus drivers and their supporters.   Panel Chair Tino Hernandez shut off CEC 31 President Sam Pirozzolo's mike after deciding he had talked too long.   I made a motion to extend his speaking time by two minutes citing the fact that we were guests on Staten Island and we ought to allow some additional time to hear the concerns of the elected parent representatives.   Queens PEP member Fedkowskyj seconded my motion.   Chair Hernandez first said "no" and then apparently realizing he had violated parliamentary procedure, agreed to provide one minute of additional speaking time.

Several CEC members including Michael Reilly and Frank Squicciarini as well as members of the public spoke in favor of their security proposal which would add modern security to school entrances including video and buzzer systems.   I was disappointed to learn Chancellor Walcott had dismissed the proposal out of hand and accused the CEC of self promotion.  I will ask the Chancellor and staff to revisit the proposal as I did see merit to some of the ideas after speaking with CEC members, many of whom have deep expertise in law enforcement.

Chancellor Walcott responded to concerns about the bus drivers strike by insisting there was no role for the DOE or City despite the fact that the National Labor Relations Board had found that both the bus companies and DOE were primary employers of the drivers and matrons.
Posted by Patrick J. Sullivan at 2/08/2013 03:59:00 PM

Thank you again for letting us, who were not able to attend,know what was passed at the meeting.

Patrick: is this the first resolution that you have made supported by the mayoral appointees? And how do you account for this? Didn't anyone know about the federal investigation when the contract was rubberstamped just a few months ago, despite investigations which showed Champion as having inflated billing in the past?

I've had two prior proposals supported by the mayoral appointees. They agreed to place some safeguards on military recruiting a few years back. In December they joined my resolution to call on the DOE to reconsider the 60& school lunch price increase. The Chancellor said he agreed with me so I guess they felt ok as well.

In the case of Champion, I don't think they had much choice: rejecting my resolution would mean they were continuing to support granting the contract despite the federal investigation. DOE is not commenting on whether they knew or didn't know.

In regards to the safety issue at our schools, yes you can add buzzers and cameras, and lock the doors....but will that keep our children safe...NO!!
Students are not in the school 100% of the day...they go out to the schoolyard for lunch and gym. So the nut that you are locking out of the building, stands just outside the school fence or across the street and gets to our children that way. So you can see this is a complicated problem on many levels.

Patrick,
Thanks for keeping us in the loop and doing so much work. You, and your efforts, are appreciated.

I was there and finally got to see the politics in action. Unfortunately I didn't get there in time to sign up to speak. A parent, who supports my cause, offered me her spot. I humbly declined and told her to speak about her fight against Dyslexia.

Thank you for trying to push back on that contract.