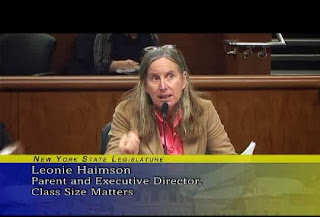 Video  of Wednesday’s excellent NY Assembly hearings in Albany on inBloom and student privacy are online and below, including riveting critiques from many of the Assemblymembers from both parties, who grilled Commissioner King and Associate Commissioner Ken Wagner of the NYS Education Department.  In turn, King and Wagner continued to obfuscate and tried as much as possible to avoid answering their direct questions or responding to their concerns.
Chair of the NYS Assembly Education Committee Cathy Nolan was also particularly upset because inBloom refused to show up for the hearings after being asked to testify.  InBloom claimed a "prior engagement" --  the exact same response the NYC Council received from the company when the Education Committee held their hearings last month.
I was disturbed to learn that the state had already uploaded a large amount of personal student data to the inBloom cloud, only without names attached, apparently to help inBloom "test" and develop their infrastructure  -- though both Wagner and King avoided answering questions about what exact data elements were shared.
There was much compelling testimony offered by NYC parents Karen Sprowal, Valerie Williams, Vice President of CEC District 75, and Ossining parent Lisa Rudley of NYSAPE, all parents of special needs children who face the most risk from public disclosures of their disabilities.   Mary Fox Alter, Superintendent of Pleasantville schools, Karen Zevin, Croton Harmon School board member, and Tim Farley, principal of Ichabod Crane Middle School in Kinderhook NY were also eloquent in their opposition to the violation of student privacy rights this project represents.   Cathy Nolan was so impressed with Mary Fox Alter that she suggested she apply to be NYC Chancellor.
My testimony as well as that of Karen Sprowal and Valerie Williams starts at about 2 hrs 11 minute in; my written testimony is here.
Attorney Jane Lauer Barker who is representing NYC parents on a lawsuit to enjoin the state from sharing this data testified, at about 3 hours in, and was illuminating about how the state's disclosure of this information appears to violate the Personal Privacy Protection law, because it is not either necessary nor authorized by law.  She  also pointed out how the "service agreement" between NYSED and inBloom is totally one-sided: "it's not a service agreement that would ever have been drafted by an attorney for this particular client [NYSED] because it puts the onus and the burden on the State Education Department to protect the data, not on inBloom."
She cited several provisions that gives all the liability to NYSED and none to inBloom, including that inBloom makes no guarantee of compliance with any data privacy or security laws, will not warrant that its system is not susceptible to intrusions or hacking, and has no responsibility to notify anyone but NYSED if there are breaches. The agreement also contains no provisions for penalties to inBloom if a breach does occur. Her written testimony is here.
Also rather disturbing was the testimony (at about 4 hrs in) from David Little, director of Governmental Relations for the NY State School Boards Association. Despite the fervent protests of many school boards across the state against NYSED's data-sharing plans, Little minimized the risk of breaches and expressed opposition to any of the current bills introduced in the Legislature to require parental consent or opt out before personal data is shared with any third party vendor.  He said that disclosing this data could provide numerous benefits, including making it possible for colleges to gain access to students' behavioral/disciplinary records when considering their applications.  He remarked that such data could be calculated in the form of a numerical “inBloom score” that would be useful to colleges to consider alongside a student’s test scores and grades. On his way out of the hearing room,  I thanked Little for giving parents yet another example of why this plan is so repugnant to them. UPDATE: NYSSBA has put out a statement that Little was providing a "cautionary example".  A transcript of Little's full testimony is here.