Yesterday, we held a terrific rally with hundreds of parents and kids, filling the steps of the NY Public Library, outraged at the onerous provisions in the state budget bill that would force the city to give every new and expanding charters preference for public school space going forward or cover the cost for them to obtain private space.  The rally was the result of an unprecedented outreach and organizing effort by Community Education Council leaders, elected by public school parents citywide,  to inform them of what had happened, and allow them to express their justified outrage at the forced privatization of our public schools. For more on the rally see our press release on Diane Ravitch's blog here.

This is the most egregious charter preference law in the nation, and the most acute violation of local control.  As Sen. Liz Krueger pointed out at the rally, the privatizers avidly supported mayoral control when that mayor was Michael Bloomberg, eager to give away our schools to charter operators.

But when New Yorkers overwhelmingly elected  a mayor who said he would charge charters rent and hold a moratorium on co-locations, the powers that be persuaded the Governor and the leaders of the Legislature to perform a bloodless coup, to essentially eliminate mayoral control and force the city to pay for unlimited charter expansion at the cost of our public school students, creating even more division, overcrowding, deprivation and larger class sizes.

Here are some snapshots from the afternoon -- which sadly few media outlets chose to cover: 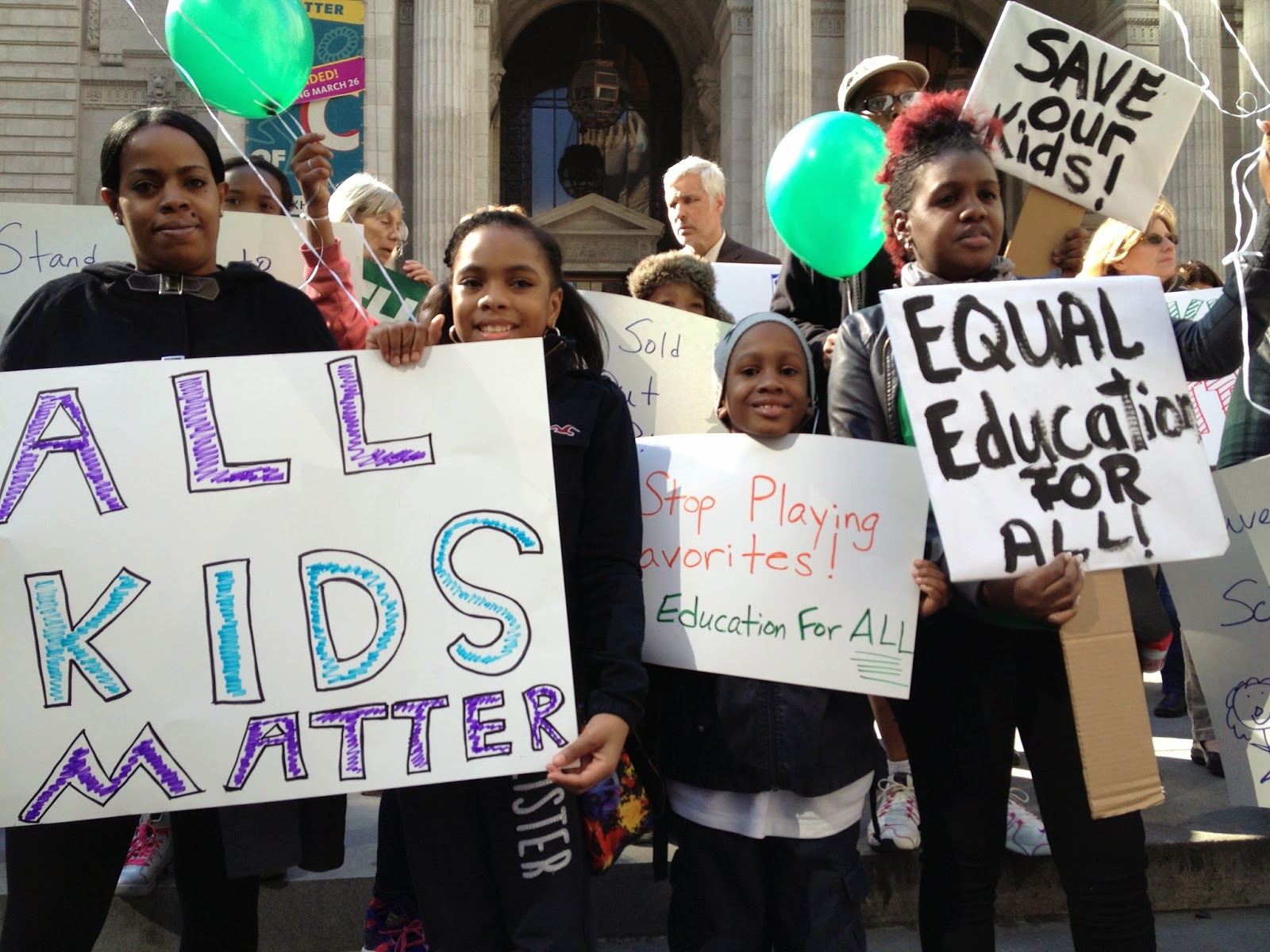 Yes!  All Kids do Matter.  And the Governor should stop playing favorites and do his duty by providing an equal education for all children. 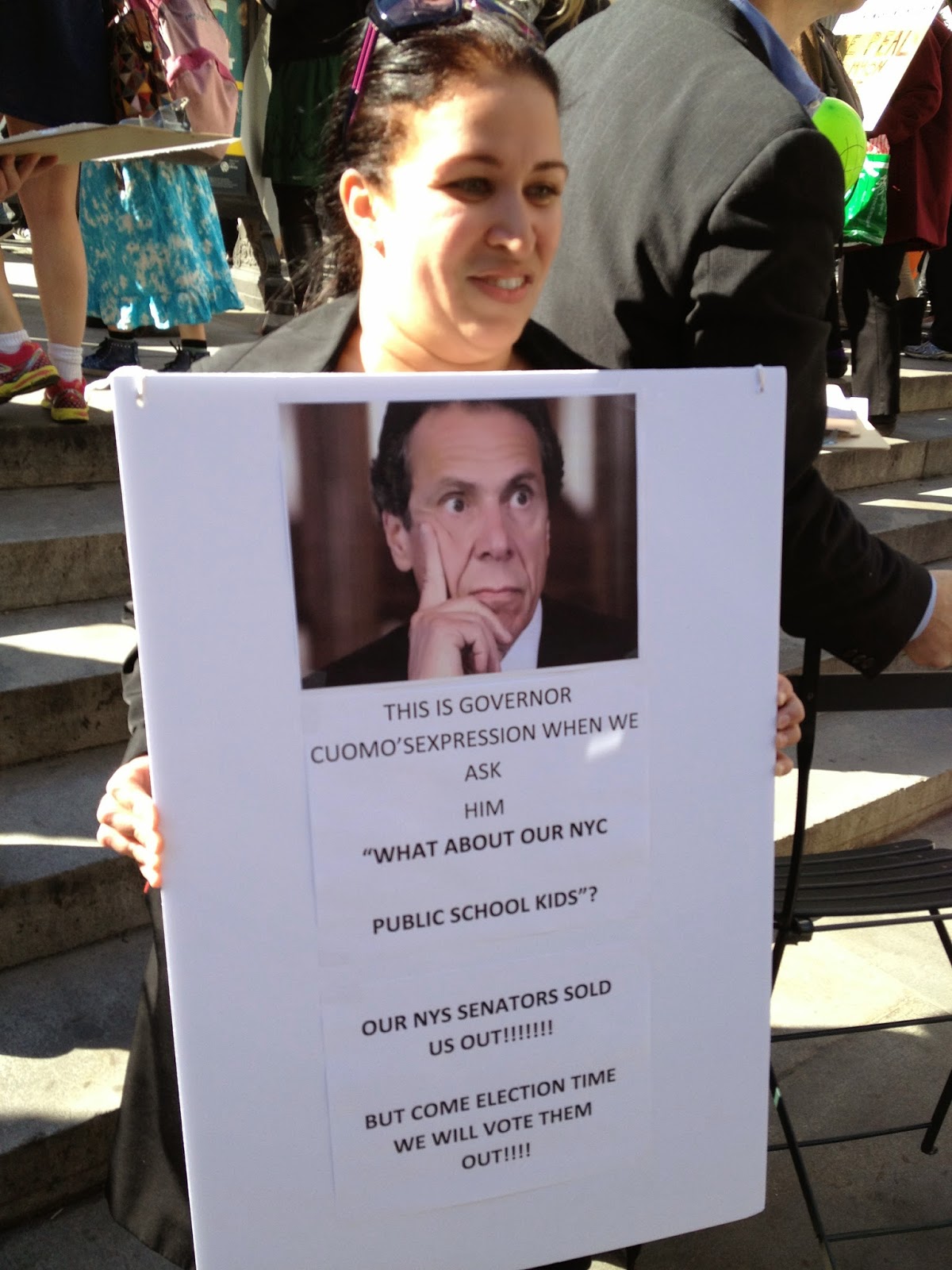 Gloria Corsino, President of the Citywide District 75 Council, with a sign pointing out how the Governor and (some of ) our Senators sold us out. 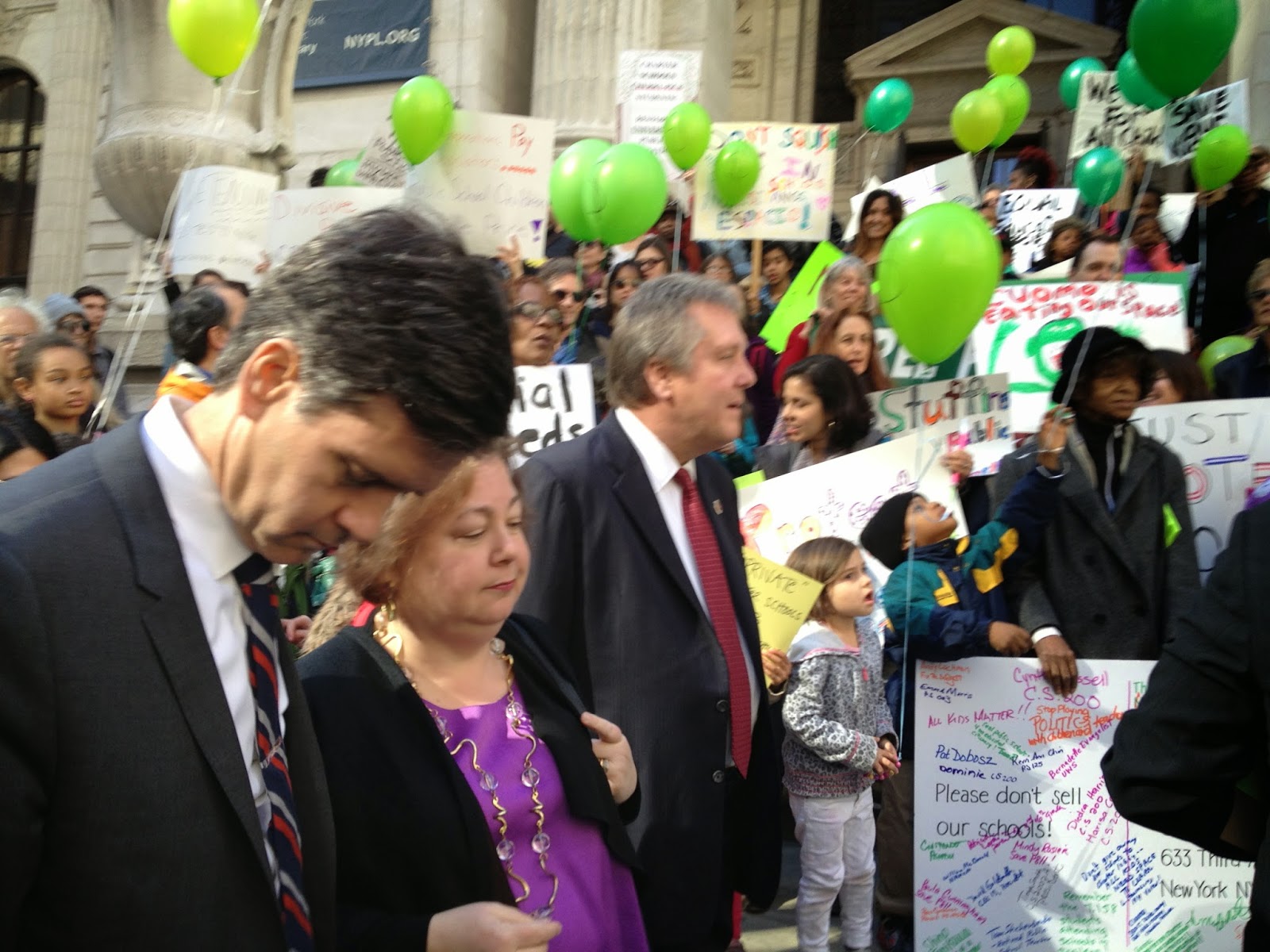 Some of the elected leaders who came to support our rally and oppose the hostile takeover of our schools included State Senators Brad Hoylman, Liz Krueger, and City Council Education Chair Danny Dromm. 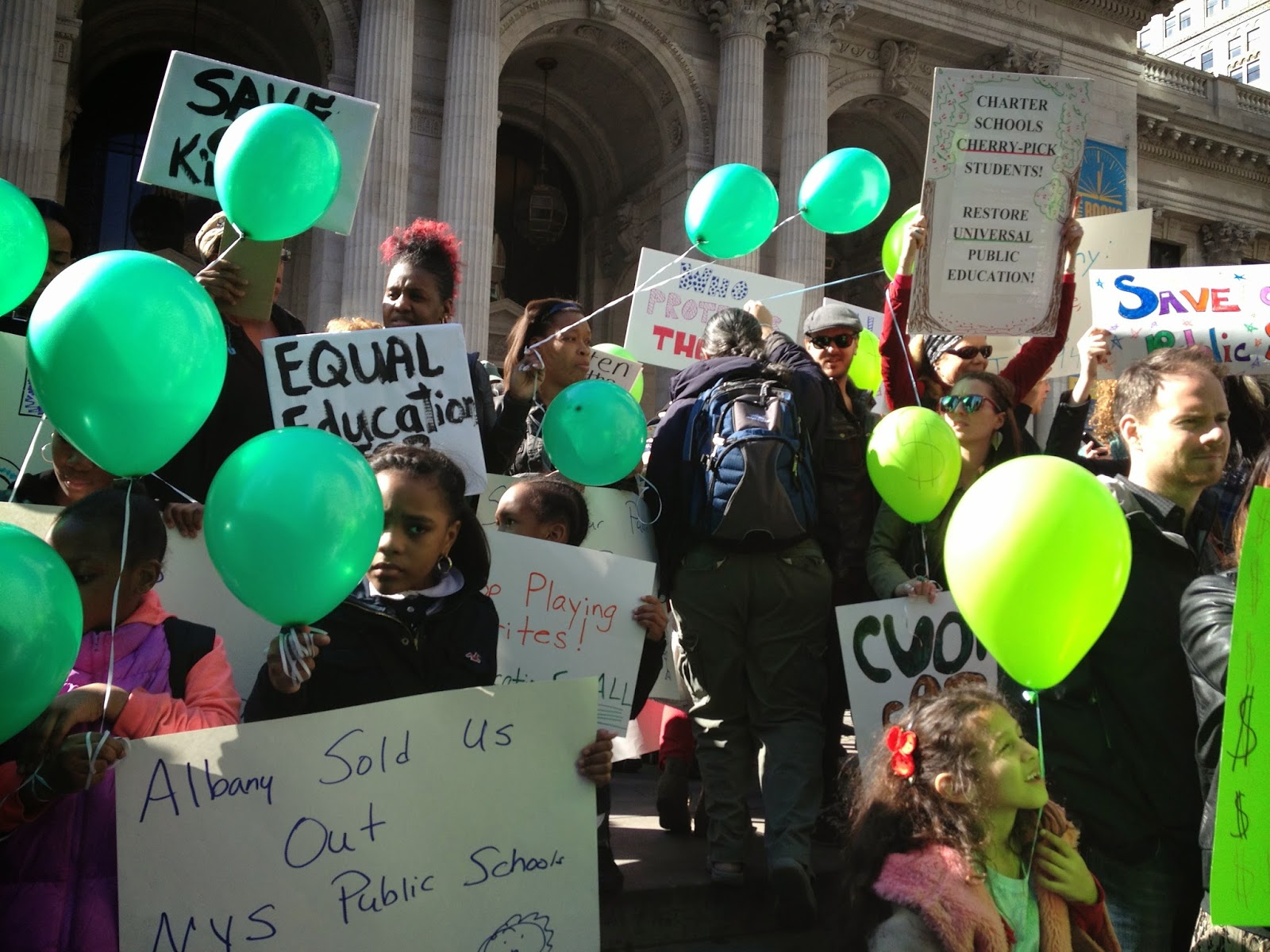 The crowd continued to gather, and despite the anger, it was a festive occasion with green balloons and an opportunity to have our voices heard for a change. 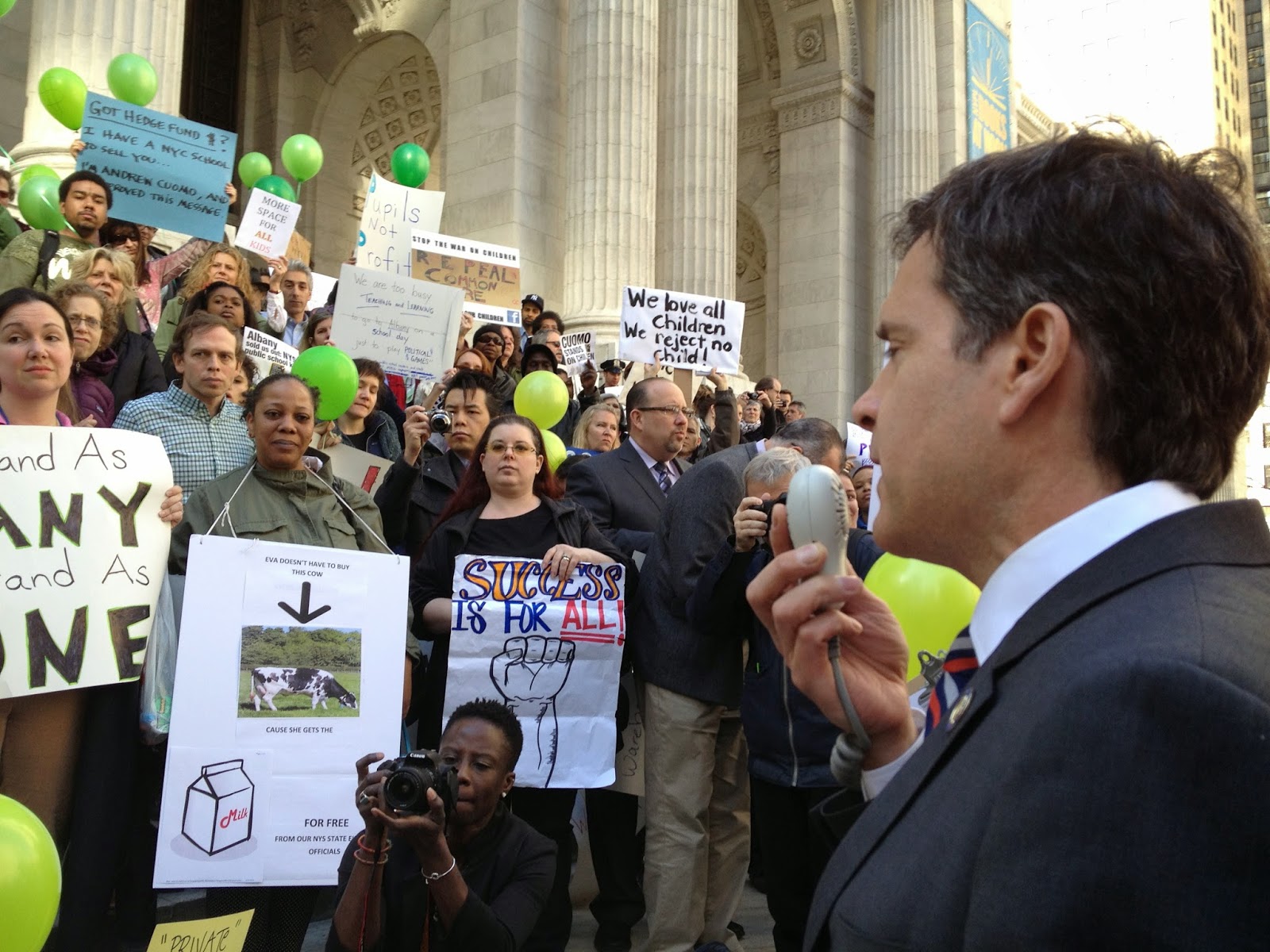 Brad Hoylman, one of only three Senators to vote against the budget bill, saying, "Did any ask the parents if they wanted their kids evicted out of classrooms and art rooms to make way for charters?"  The answer was a resounding NO! 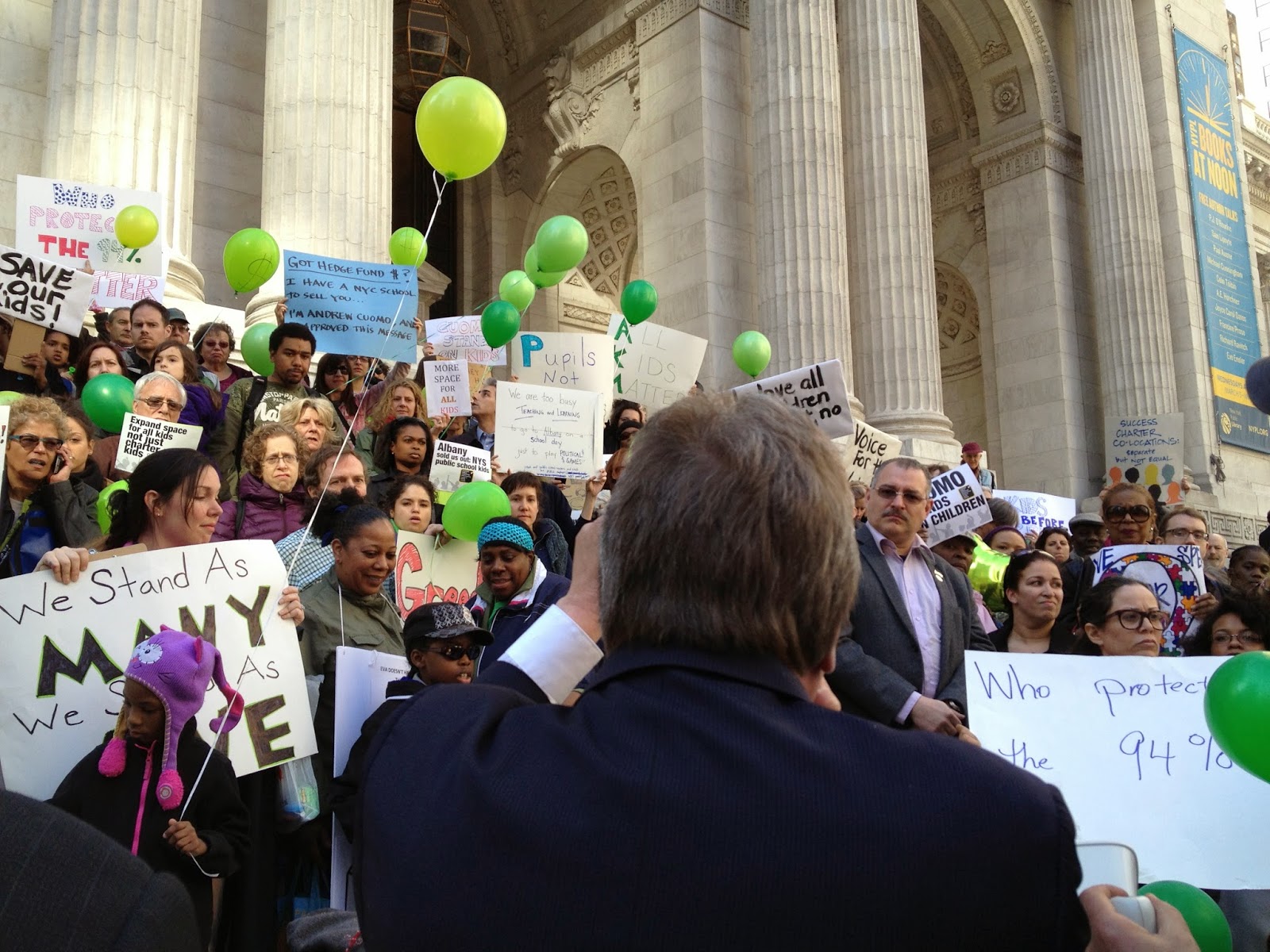 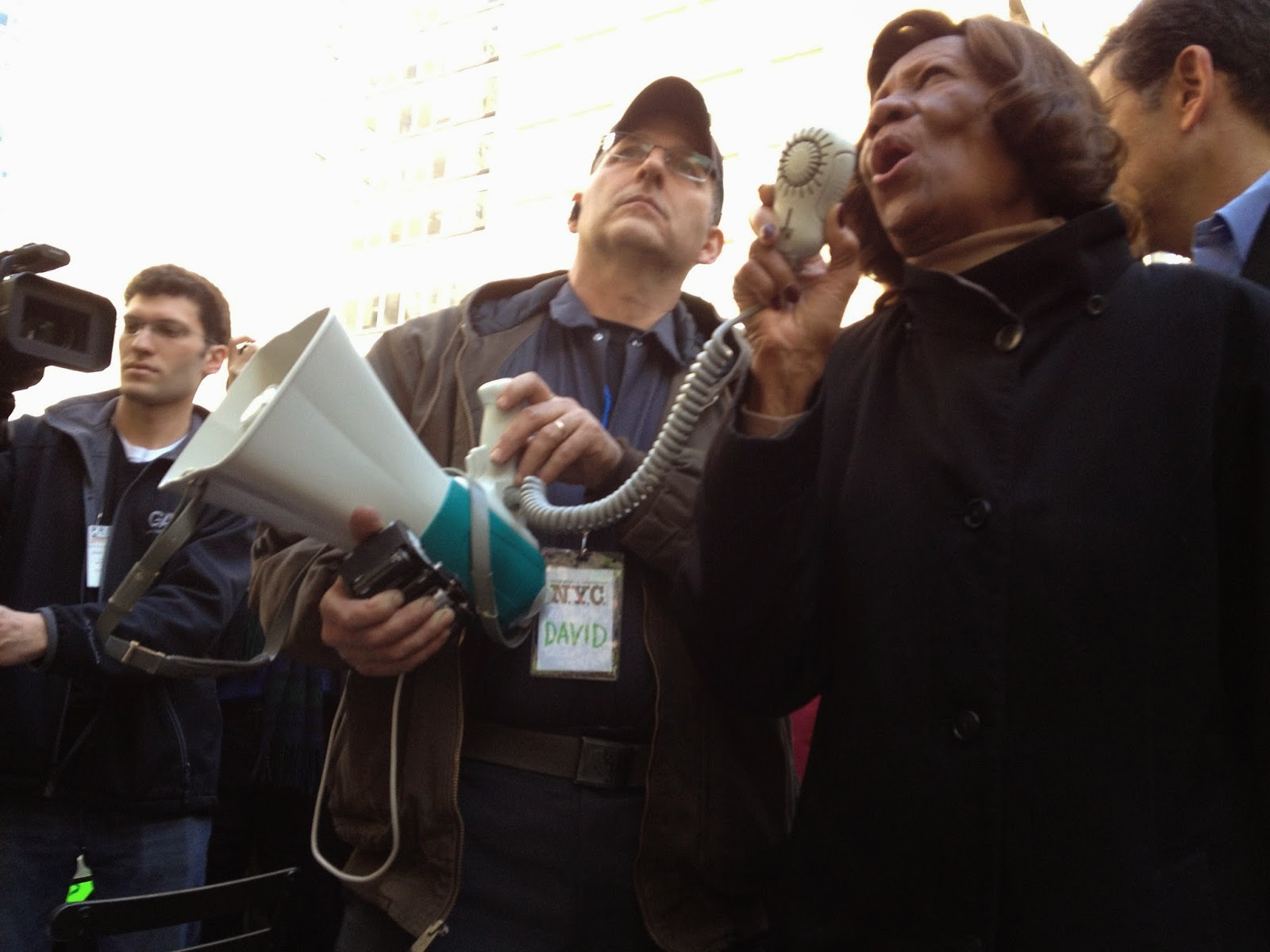 The civil rights leader Hazel Dukes, President  of the NAACP New York State Conference, told how she will continue to fight for the rights of all children for a quality education, and pointed out that 60 years after Brown vs. Board of Education, special needs kids are getting their services in closets due to charter encroachment. 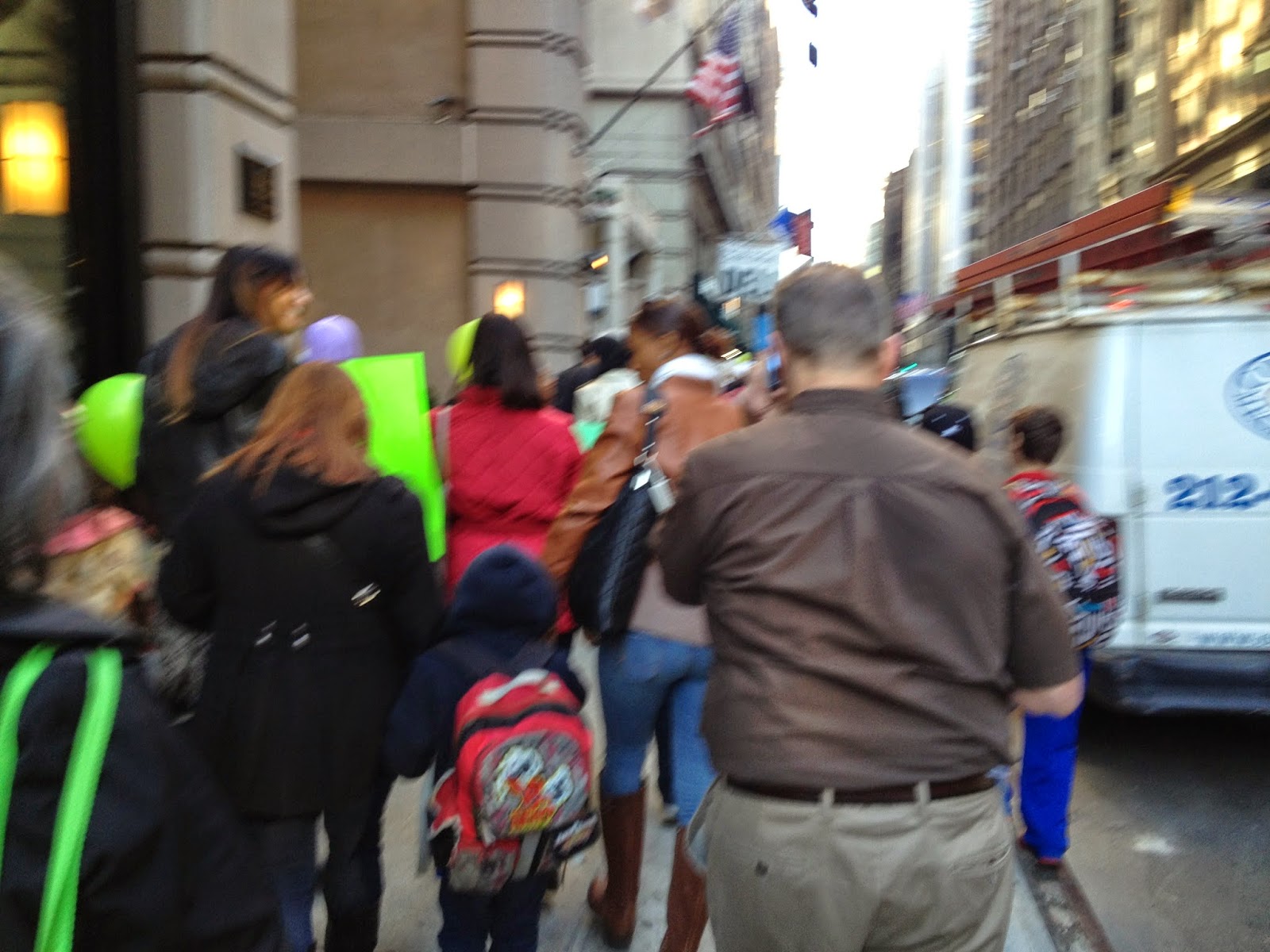 Hundreds of us march to the Governor's office on 3rd Avenue, while chanting, led by drummers. 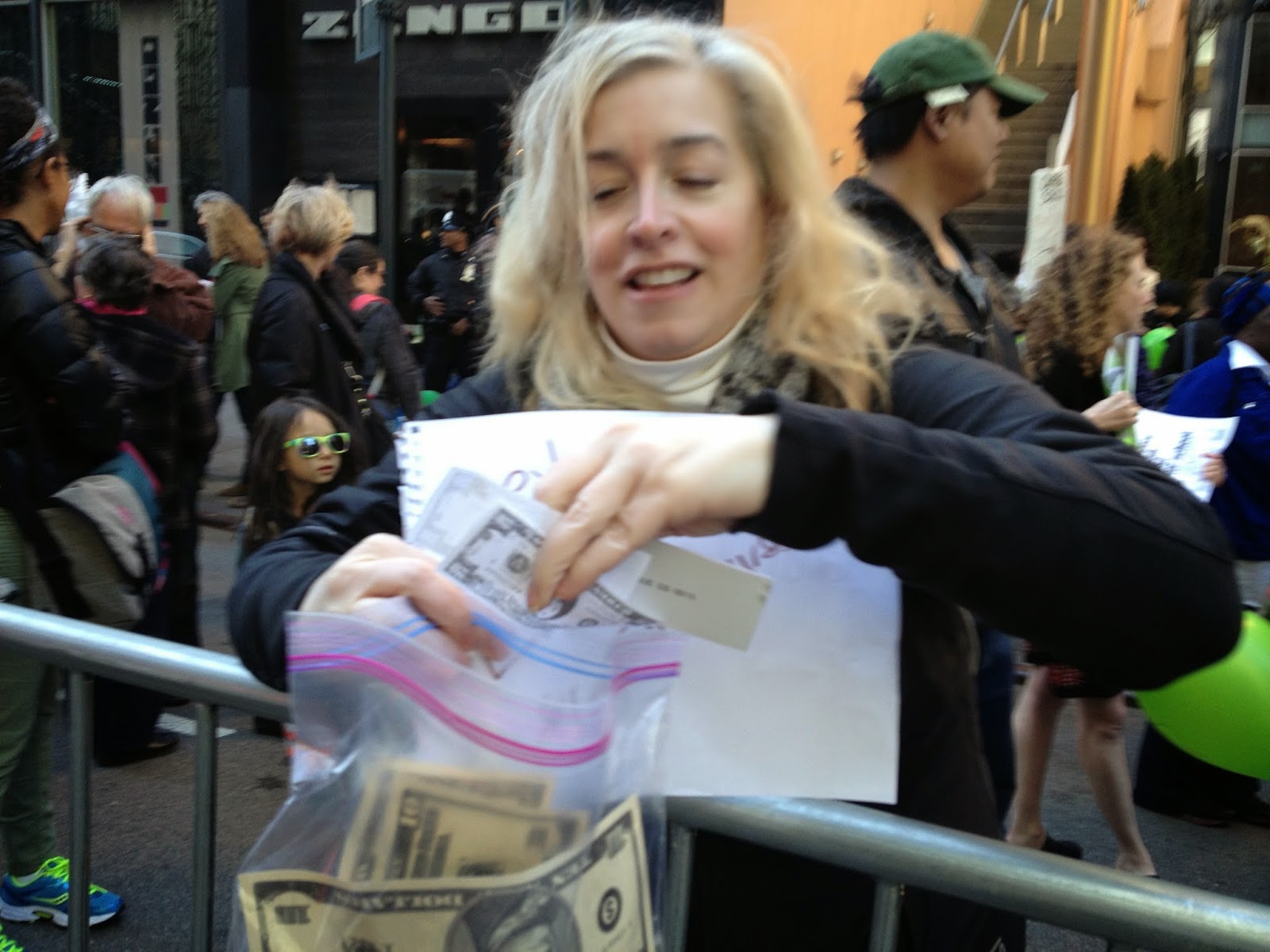 We collect (fake) money to give to the Governor, as this is what appears to be motivating his preferential treatment of charter operators and their hedge fund backers, who have contributed nearly $1 million to his re-election campaign. 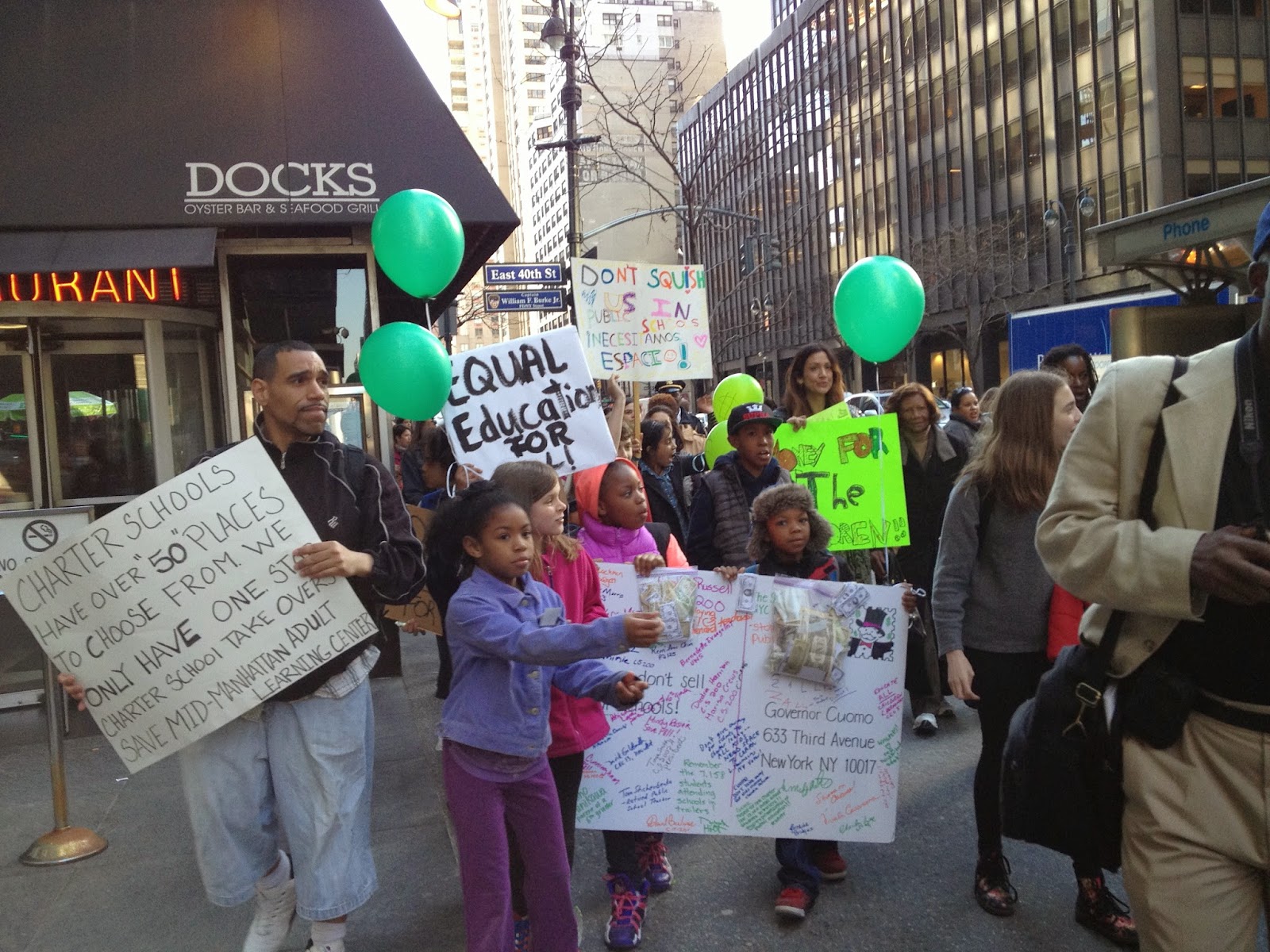 Children and their parents cross the street to meet with the Governor's representative, to give her a postcard addressed to Cuomo, signed by kids and parents, urging him not to sell-off our schools, with (fake) money taped to it. 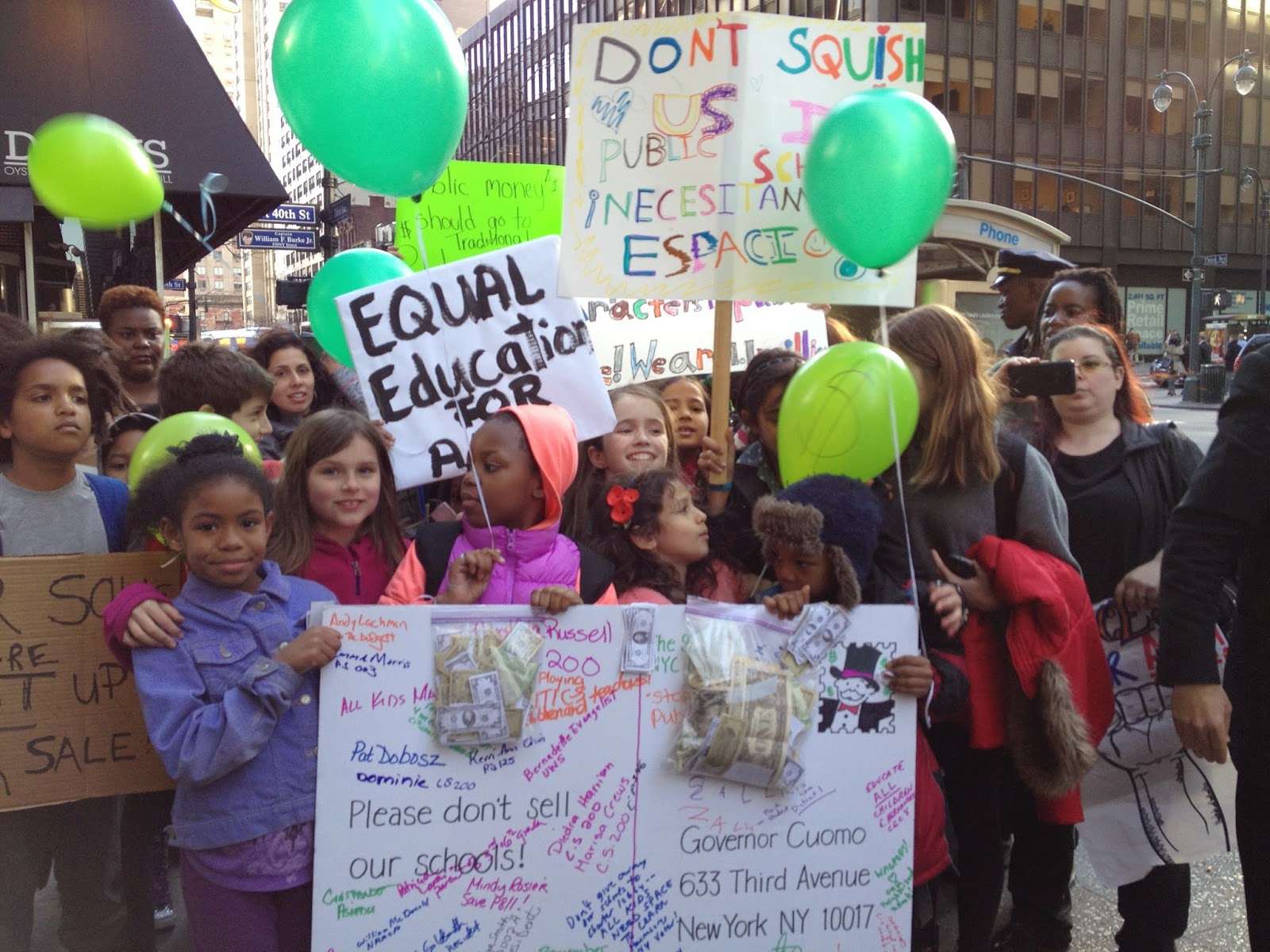 The children hold up the post card to the Governor, with a stamp portraying Rich Uncle Pennybags from Monopoly.  (Thanks Shino Tanikawa for her artwork!)  They  hold more signs, saying "Don't Squish us in, Public Schools Necesitamos Espacio!" 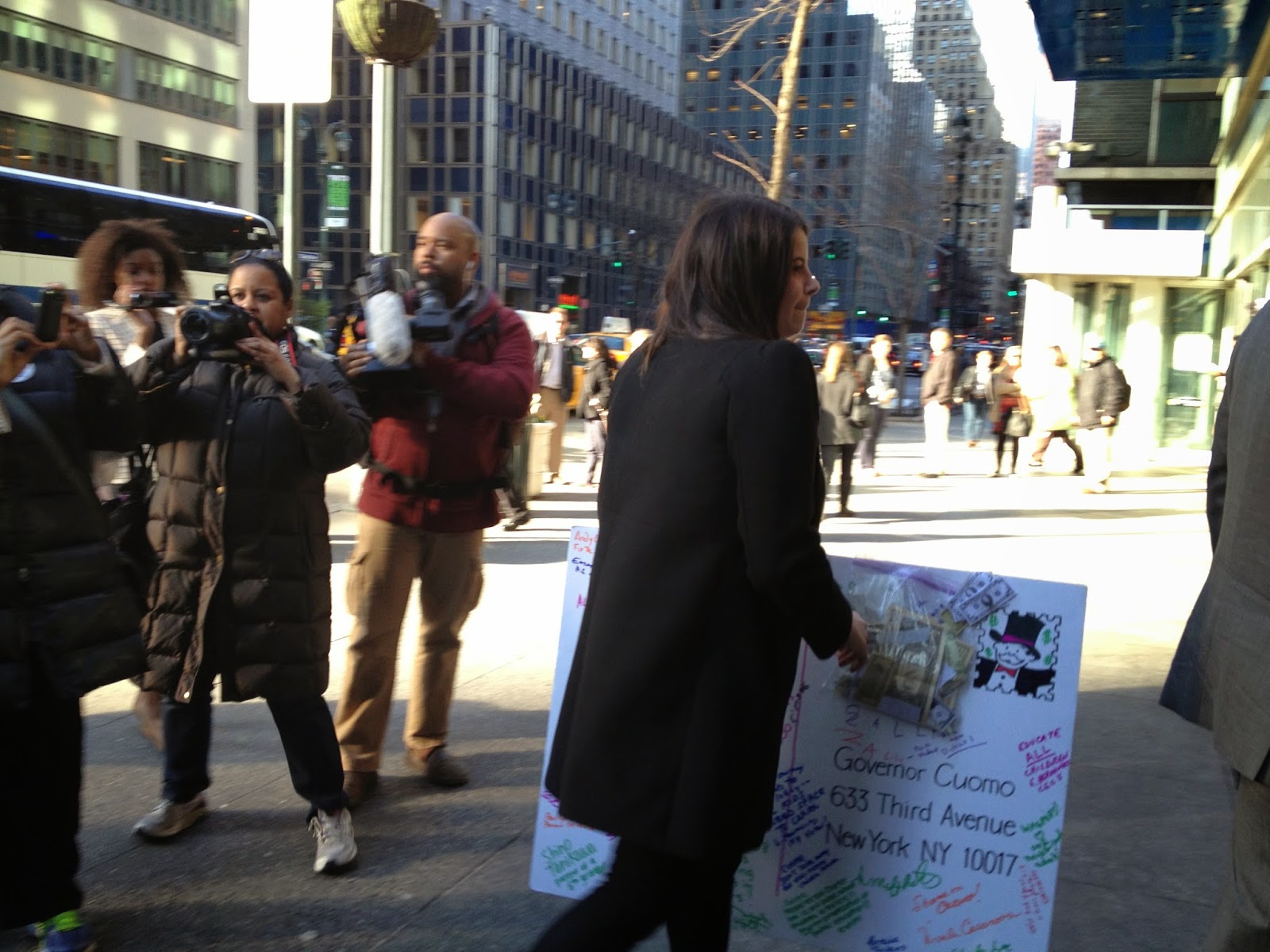 The Governor's deputy press secretary carries the post card back into their offices. 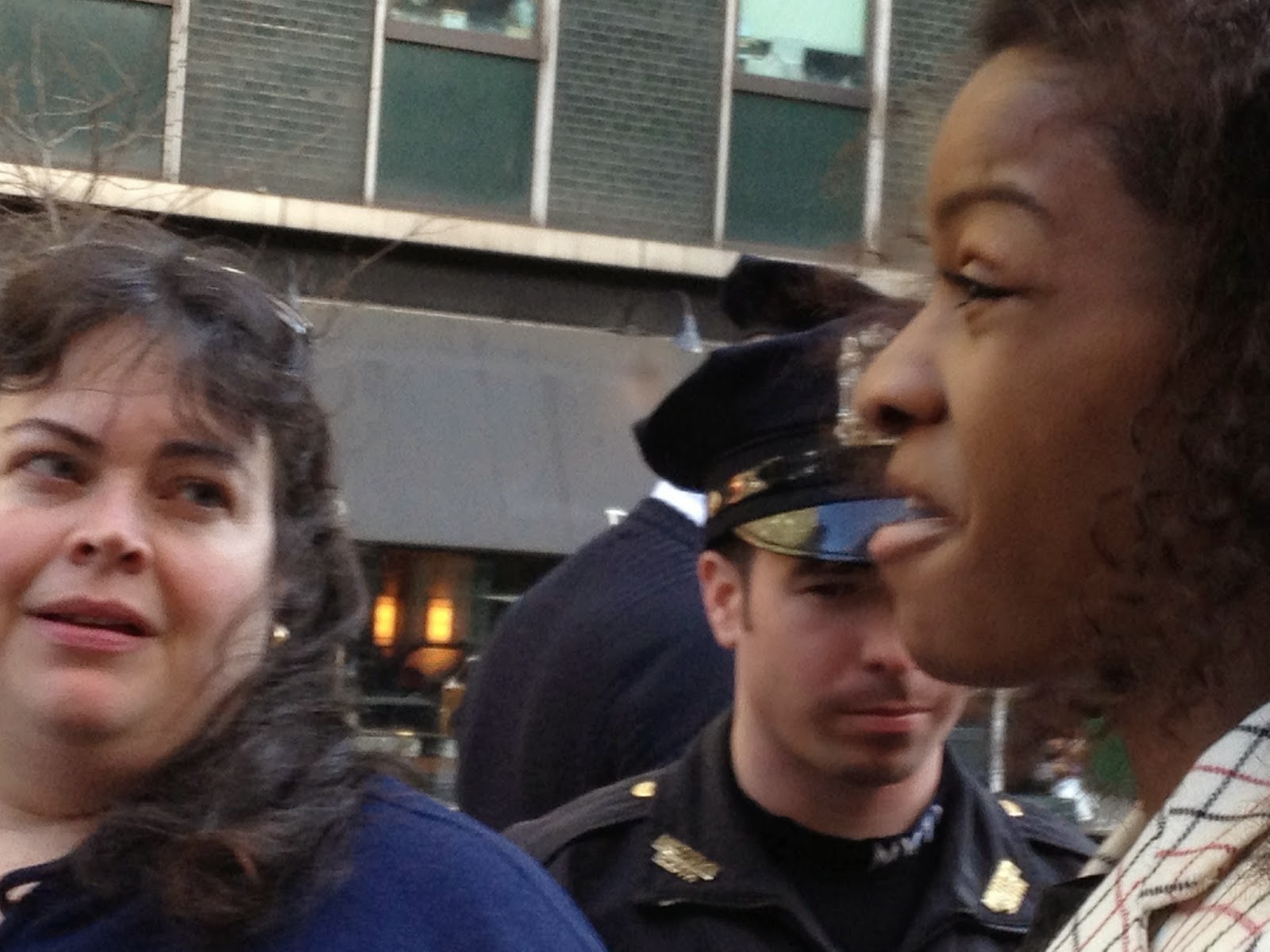 Meanwhile, Brooklyn parents, facing a Success co-location that the community uniformly opposes, get into a heated argument with a Success employee, there to videotape the proceedings for Eva Moskowitz. Our protest ends with a speech by Senator Bill Perkins, one of the other three Senators to vote against the budget bill, along with Sen. Velmanette Montgomery.   He compares the proliferation of charter schools to the growth of Kentucky Fried Chicken franchises selling unhealthy food; and adds that charter operators are like "wolves in sheep clothing."
Posted by Leonie Haimson at 4/11/2014 04:18:00 PM

We must keep up with rallies and grow them into the thousands before the media will notice. Critical mass!!!! Testing issue is resonating -- need to make the charter issue resonate too -- both issues are connected.