John Oliver features the Pineapple on his takedown of standardized testing 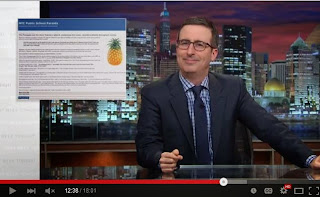 Check out last night's hilarious take-down of the insanity of standardized testing in this country by John Oliver; including the infamous
"Hare and the Pineapple" passage, which was  part of the NY 8th grade ELA exam in 2012.  This passage was exposed first on this blog the day after the exam was given and quickly went viral.

But the real scandal is that before that, this  absurd passage and its associated ridiculous questions had been used by Pearson in their standardized exams in Florida, Illinois, Delaware, New Mexico, Arkansas, Alabama and other states for at least seven years before the New York media picked up on the story. Every time, students had been confused, teachers and parents complained, and yet Pearson kept recycling the questions, over and over again.


Below is the video from last night's how; to the right is a screenshot of our blog.

I don't understand why Pearson is involved in the Renewal program for designated failing schools in Nyc when these schools are failing at the very hands of tests poorly designed by Pearson. I find that outrageous and makes me question Farina's judgment.

Go to dianeravitch.net, and get the feed. Search there for the truth... the tests were a tool to label a school failing.... and then the legislatures could take them over...They were never meant to assess kids toimporve their learning....that is what teachers do...they were put in place to end public education, so our democracy would be disabled. Period!