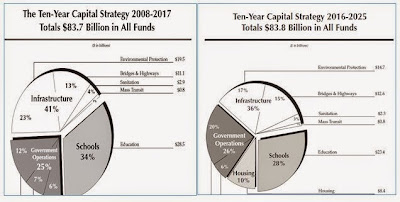 See  the testimony below that I gave today to the NYC Council on the deficiencies of the proposed Mayor's proposed executive and capital budgets for schools, which if adopted as is would lead to larger class sizes and even more overcrowded schools.

The new ten year plan has schools at only 28% of overall capital spending, compared to 34% in the Bloomberg plan, and cuts back the spending by almost $5 billion.  See the above charts to compare.