Are 5,485 classes this fall that violate the union contractual class sizes a cause to celebrate? 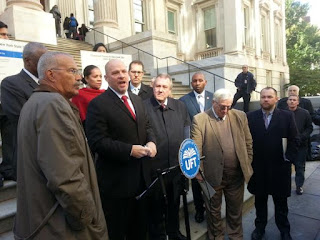 Update:  I've added videos of Assemblymember Jeff Aubry and CM Donovan Richards.  More on the press conference, including some quotes from me in the Daily News, Chalkbeat,  Schoolbook, NY Post and PoliticoNY. See also the UFT website for more stats.


Today, Michael Mulgrew, the President of the UFT,  organized a press conference on the steps of Tweed about class size.  He thanked our   legislators for bringing home more education funds for NYC schools in last year's state budget, and the Mayor and the Chancellor for seeing that much of it went to schools.  He applauded the fact that there were fewer class size violations during the second week of school than last year, 5,485 compared to 6,447 the year before.  Then he added that we needed to  push to ensure that the full $2 billion extra that we are owed by the state as a result of the Campaign for Fiscal Equity decision in 2003 -- 12 years ago-- is finally provided to our schools.

Also speaking with passion and conviction about the need to reduce class size and the importance of NYC schools getting their fair share of funding were Assemblymembers Keith Wright, Guillermo Linares and Nick Perry; and Senators Velmanette Montgomery and Bill Perkins.

Assemblymember Keith Wright pointed out that "“There’s no secret to improving schools," merely great teachers and small classes.  "We have great teachers and now all we need is smaller class sizes." Senator Perkins said,  "Even Stevie Wonder can see that class size matters."

Here's Assemblymember Jeff Aubry on the inequities of class size in NYC compared to elsewhere in the state:

City Council Education chair Danny Dromm, and Council Members Alan Maisel, Julissa Ferreras, Mark Levine, Corey Johnson spoke about how class size matters and their commitment to fair funding.  Council Member Donovan Richards of Queens said it was a matter of social justice, and that he almost fell through the cracks because of class size at Jamaica high school (now closed.).


Council Members Dromm and Maisel, both former teachers, said they simply couldn't do their best with the large classes they were assigned. 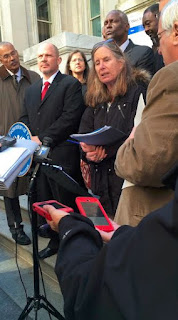 When it was my turn, I said that Cuomo has a moral obligation to fulfill the judgement of the state's highest court, which found that NYC kids were deprived of their constitutional right because of excessive class size. I pointed out the smaller classes were the top priority of parents in the DOE own surveys, and a top priority of most teachers as well.

But I added that the Mayor and the Chancellor also have a real responsibility to reduce class size in our schools, especially since they had made repeated promises to do so, that have gone so far unmet.  Here are some of the pledges they have made,  in relation to another contractual commitment -- the Contracts for Excellence law passed in 2007 that required NYC to reduce class size in all grades:

Bill de Blasio on June 14, 2013, at a Mayoral forum at Murry Bergtraum HS  at which he promised to commit to specific class size goals and if necessary, raise funds to pay for this.  You can see how he checked off the form and signed it himself: 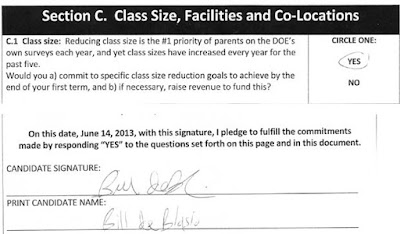 Bill de Blasio in July 2013,  in his completed KidsPAC candidate survey, in which he promised to set reduced class size goals to achieve by the end of his first term, which he has failed to do, as well as achieve the city's original Contracts for Excellence class size goals of 20 in K-3, 23 in 4th-8th grade, and 25 in HS classes:

DOE in December 2015, in their official response to public comment to their C4E plan.


For the 2015-16 School Year, NYCDOE will focus Class Size Reduction planning efforts on the School Renewal Program. The criteria for selecting Renewal Schools is [sic] aligned with C4E goals to target schools with the greatest needs.

Yet we have reports of many schools on the Renewal list that have huge class sizes, including some  that violate the union contract. At PS 111 in Queens, Kindergarten class sizes have risen to 27 this fall,  and to 30 in 1st grade.  Long Island City high school, another Renewal school, was reported as having the 4th highest number of class size violations, at 140.

We have repeatedly asked DOE for a list of Renewal schools where they have actually lowered class size, and to what levels, without success. Reporter Patrick Wall of Chalkbeat tried as well:

"Education department spokeswoman Devora Kaye said the city shares the goal of reducing class sizes. She would not say whether the city has set any specific targets around class size, or what steps it is taking to create smaller classes in Renewal schools."


Meanwhile, here is the list of Renewal schools with the most UFT class size violations as of September 18: 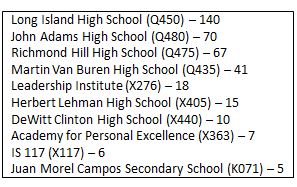 According to the UFT, Long Island City, Richmond Hill, and Martin Van Buren HS have since reduced their contractual violations to zero or nearly so. But violations mean classes of 35 or more, and reducing them to zero could mean class sizes at 34 - far from the C4E goal of 25 or less.
These class sizes are unconscionable for students who are way behind, in schools in danger of closing, whose classes should be capped at 25 or less to give them a real chance to succeed.   This is especially true as the city has a surplus of $7 billion, the Mayor promised us he would reduce class size and yet has been silent on this since his election, and the DOE specifically claimed they would focus their efforts at lowering class size in the struggling schools.

At the end of the press conference, Michael Mulgrew was asked about the fact that the Chancellor Farina does not agree that reducing class size should be a priority; and how she has made that clear to parents at numerous town hall meetings.  He responded that  the union will "keep pushing" and emphasize that "we are willing to work" with the administration on class size.  Let's hope they push hard, and make progress with a Mayor and a Chancellor who are not on the same page as parents and teachers on this critical issue.
On Nov. 15, we will see whether class sizes have significantly declined this year citywide or in  the Renewal schools, when the city releases their annual class size reports.
Posted by Leonie Haimson at 10/19/2015 10:00:00 PM

Yet another loss hailed as a victory by UFT President Mulgrew.

There is so much evidence that reducing class size has such a positive effect on student achievement. We have to continue to advocate for smaller classes in our schools. Thank you, Leonie Haimson for being such a leader for this most important cause.