My memories of Arne Duncan; why he will not be missed 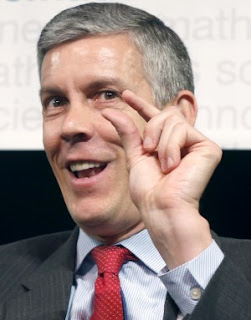 On Friday, Arne Duncan announced he will leave his post as Secretary of the US Department of Education in December.  Here are some of my memories of his damaging involvement in the divisive politics surrounding NYC schools:

In May of 2009, he personally interceded with the Citizens Union to persuade them to endorse mayoral control without any checks and balances -- so that Bloomberg could continue to fire his appointees on the Panel for Educational Policy at will -- the opposite of what anyone concerned with good government or democracy should espouse.  The organization had previously voted to endorse fixed terms for mayoral appointees, so that the Mayor couldn't summarily dismiss board members who disagreed with him, as Bloomberg had notoriously done when they differed with his decision to hold back third graders on the basis of test scores. Duncan followed up with a letter to the Citizens Union, in which he argued that putting any limits on mayoral control could “turn back the clock and halt progress” and have “profoundly negative consequences for New York City’s students.”

As a result, the organization changed its position on this issue, and mayoral control was renewed without any amendment on the authority of one man to determine the fate of 1.1 million students without any checks and balances..  After the NY Post ran a series of articles full of illusory claims aiming to show the great improvement under mayoral control,  the Legislature voted to retain it.  Arne Duncan then followed up by praising the NY Post series as "thoughtful" and thanked the paper for its "leadership", even though these articles simply regurgitated the spurious statistics provided by the city's press office.

GothamSchools (now Chalkbeat) ran a story entitled the Fruitful Alliance of Arne Duncan and Rupert Murdoch, pointing out that "New York City newspapers have a proud tradition of waging campaigns both on and off the editorial page, and then congratulating themselves when they hit their marks. But having a cabinet member for a sitting president join the cheering is more unusual." Duncan's unalloyed praise for the Mayor was subsequently plastered all over Bloomberg's copious campaign literature, which every voter received at least ten times.

Another favored activity of Arne Duncan was his boosterism of charter schools.  In May 2010, I was standing outside a Brooklyn school building in the rain along with some disaffected former charter parents while Duncan visited  Kings Collegiate Charter School in Brooklyn, one of the chain of Uncommon Schools. He had come to pressure our state legislators to lift the charter school cap.  The former charter parents I was waiting with wanted a dialogue with Duncan about the problems their children had experienced in these "No Excuses" charter schools.

Uncommon is the chain of charters started by John King, now named as Duncan's replacement, and these schools have an uncommonly high rate of suspensions and student attrition.  There are many NYC former charter parents who felt then and still believe that there needs to be more accountability and protection of parent and student rights before any expansion of charters should be considered.  From our press release (which went unmentioned in the press accounts of his visit):

Samantha Jeffrey, a parent at Kings Collegiate Charter School, says, “I support the charter school system, however I believe they have not reached their potential so that my child can reach his potential as well. I would like to work with them on real solutions that focus on the child’s academic excellence, as opposed to the distractions of the current disciplinary code and policy. I have also been ignored when I asked for essential information that I deserve as a parent. Parents at our school as well as other charter schools need a voice.”...

Lydia Temples, a former parent at Leadership Prep [another Uncommon Charter school] , said: “When I had concerns about the unfairness of the disciplinary procedures at the school, I used all the legal avenues of redress at my disposal. I filed grievances with the school, the board of trustees, the SUNY Charter School Institute, the Board of Regents, and finally, the State Education Commissioner, and none of them responded. Instead, the school called ACS to try to shut down my complaints and they took my daughter away from me for two days. I finally had to take my child out of the school.”

We had entered the school and gone upstairs with the reporters, until David Cantor, the press secretary to Joel Klein, asked us to leave.  We then waited patiently another half hour in the rain until Duncan, along with Joel Klein, Bloomberg and others, walked out of the school. The parents then plaintively called out to Duncan, "When are you going to meet with charter parents?"  Duncan responded, "Soon!" while dashing to his limo.  He never did, of course.

The following spring, in April 2011, after a speech Duncan gave at Princeton, I went up to him and asked why he had called class size reduction a "sacred cow that we have to take on" and why he  advised districts to raise class sizes.  He responded that he had only said that class sizes should be increased "selectively" and asked whether I'd looked at the international test scores of countries like Korea and Finland.  I  pointed out that Finland had turned around its education system when it reduced class size, and that the Institute of Education Sciences, the research arm of the US Department of Education, had cited class size reduction as one of only a handful of reforms proven to work to boost student achievement.  He seemed exasperated that anyone would dare to confront him on this issue and seemed more interested in doing a photo op with members of the pro-corporate reform group, Students for Education Reform.

Duncan's reign of error was inherently political, and he never hesitated from intruding into NYC politics or taking positions contrary to the priorities of public school parents or to what research shows really helps kids succeed.  He will not be missed.  About his replacement, John King?  That's a whole other story!
Posted by Leonie Haimson at 10/06/2015 02:35:00 PM