My frustrating Thursday: DOE's evasions and the Mayor's refusal to reduce class size or admit that he ever said that he would

UPDATE: see the YouTube video of the Town hall added below.

For other accounts, see news reports of the Mayor's Town hall at ChalkbeatNY and the Daily News.

On Thursday I attended two events -- first in the morning at a briefing on Renewal Schools at City Hall and later that evening, a Town hall meeting in  Queens with Mayor de Blasio.

The City Hall briefing consisted of a long power point from Aimee Horowitz, the Executive Superintendent of the Renewal school program and Chris Caruso, Executive Director of Community Schools.  For more than an hour we listened to all the various programs and services that are planned, with no mention of reducing class size in either presentation.

Finally I got a chance to speak.  I asked Ms. Horowitz: "In which renewal schools are class sizes reduced this fall, to what levels, what resources and strategies are being used, and how was the list of schools selected?"

My question followed from the DOE claim to the state  last December and again this fall, in their Contract for Excellence presentations, that they would be focusing their "Class Size Reduction planning efforts on the School Renewal Program."   This was a repeat of questions that CEC members and I have been asking DOE officials for months; without any response. We already have heard of several Renewal schools this year where class sizes have risen to 27 students per class in Kindergarten, 31 in 1st grade and 35 or more students in high school.

Ms. Horowitz replied that there was no separate list of Renewal schools slated for class size reduction, and that all 94 schools were expected to lower class size by use of their increased Fair Student funding and help with "programming." When I asked if that meant we should see smaller classes in all of these schools when the data is released on Monday, she nodded yes, but then said "proper class sizes."  I followed up with an email asking her what  she means by "proper class sizes", but I am not hopeful of a substantive reply.


Later that evening, I attended the Town hall meeting in Jackson Heights where Mayor de Blasio fielded questions about school overcrowding, testing, special ed and a host of other issues.  Two CEC members spoke; Bill Kregler from CEC 24 (at 50:12 minutes in), who blasted the Mayor for not building enough schools in his extremely overcrowded district, and instead using the sites for homeless shelters.  He also denounced Mayoral control as a failure.  Deb Alexander, co-President of CEC 30, (at 1 hr:19 minutes in) said that class size was the most important issue for her and other parents, and one of the top reasons parents leave the city for private and charter options, and asked de Blasio if he was going to focus on this issue.  de Blasio responded that there just isn't enough funding and space to make progress happen fast enough, and instead there would be more reading specialists (for 2nd graders, starting only in four districts).   Farina said for oversized Kindergartens, (those that violate the cap of 25, that hasn't changed in 50 years) the teacher would get an extra prep period or a paraprofessional.

She also questioned by whose definition is a class too large or too small, repeating  her curious notion that she expressed at the District 2 Town Hall that class sizes could be too small. (As though that would ever be a problem in NYC public schools, when so many students are crammed into classes of 30 or more.  The fear of overly small classes also doesn't seem to worry those who send their kids to elite private schools like Exeter, that caps class sizes at 12 students per class.)

As you know, smaller classes are parents #1 priority on the DOE’s own surveys.  During your campaign you promised to reduce class size to much lower levels and if necessary raise funds to do so, and to expand the school capital plan to provide the space to make this possible.


Yet no funding has been allocated towards class size reduction, class sizes are larger than ever, and last year more the 350,000 students were in classes of 30 or more.  School overcrowding has also worsened, and elementary schools capacty on average is a stunning 104% - with more than half of all students attending extremely overcrowded schools.


Your priorities of expanding preK and affordable housing, though terrific goals, will exacerbate school overcrowding, and yet the city cut back on the funds dedicated towards school construction in its ten year capital plan, and the current capital plan will create less than half the seats necessary to address enrollment growth and alleviate current conditions.


My question is this: are you still committed to reducing  class size and school overcrowding, and if so, what resources and strategies will you use to accomplish this goal, and when will we see progress?  And let me remind you, the city has an $8 billion surplus and the power of eminent domain, which means you can take over any property to build a school.


Finally, will you agree to form a Commission to improve the efficiency and accuracy of the school planning process?

The Mayor responded, in a disgruntled fashion, "I knew you'd be here."  He said in preparation for the evening, he took a look at his campaign promises and differed with my interpretation of what he had pledged.

(Take a look at these and let me know if you think I mispoke.   The form de Blasio filled out and signed at a Mayoral forum at Murry Bergtraum HS in June 2013 [click on the images to enlarge]: 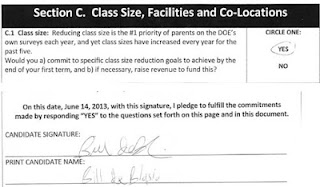 His responses to a NYC KidsPAC candidate survey in July 2013:

But at Thursday's Town Hall, after first refuting that he had ever promised to reduce class size, De Blasio said that he also disagreed with my conclusion (shared by others) that the city has an $8 billion surplus, as it's his responsibility to preserve a "cushion" in case of a recession, and the state and the feds cut aid to the city.

He then said that he was proud of his affordable housing program, and claimed that it will not lead to more school overcrowding but will allow families to stay in their neighborhoods.  He said he's getting kids out of trailers, and adding reading specialists, and that "we will never give up."  He said that he will consider the idea of a Commission to improve school planning, and "let you know."

By the evening's end, at least four more parents and teachers had spoken out about class sizes being too large, and a lack of progress in alleviating school overcrowding.  Others protested excessive school discipline policies, the fact that school safety agents continue to be under the control of the police, the inability of working parents to attend IEP meetings during the school day, and the overemphasis on testing and test prep, which several parents and teachers said had not abated under his administration.

On the issue of high-stakes testing, de Blasio countered that schools no longer received grades based on test scores; and that the DOE had stopped holding kids back based on test scores  (a practice that the state has made illegal.).  But then the Mayor added that he didn't support parents opting out of the state exams because "there's a clear federal rule that if there is too much non-participation in tests, it can lead to a reduction in federal funding," a claim that has been roundly disputed, including in the NY Times.

Anyway, the evening was profoundly disappointing and does not leave one with much hope that the Mayor  intends to address the twin problems of huge class sizes or overcrowding that plague our schools, and which profoundly undermine the chance of NYC students to succeed.  One must conclude that if real progress in these areas is to occur, he will have to be pushed hard, either politically or legally, to do so.
Posted by Leonie Haimson at 11/14/2015 07:22:00 PM