It's been a hard few weeks for the charter lobby.  First, members of the NAACP overwhelming approve a resolution calling for a national moratorium on charter schools.

Then, the Black Lives Matters movement called for an end to the privatization of our schools:

Sixty years since Brown v. Board of Education, the school-to-prison pipeline continues to play in role in denying Black people their human right to an education and privatization strips Black people of the right to self-determine the kind of education their children receive. This systematic attack is coordinated by an international education privatization agenda, bankrolled by billionaire philanthropists such as Bill and Melinda Gates, the Walton Family, and Eli and Edythe Broad, and aided by the departments of Education at the federal, state, and local level.

Finally, John Oliver on HBO's Last Week Tonight did a terrific take down of the corruption and chaos that charters bring to our public school system:

John Oliver's satires can be quite influential.

See how his critique  of testing companies in 2015, including the infamous Pearson Pineapple, helped influence parents to turn against standardized testing in a nationwide survey:

But don't feel too bad for the charter lobby. Backed by millions of dollars of "dark money" from right wing corporate interests and Wall St. hedgefunders, they aren't giving up.

Check out this $2.3 million ad campaign to promote the raising of the Massachusetts charter cap through a referendum this fall.  The ad ends with urging the public to vote to raise the cap with the Orwellian tag line, "for stronger public schools." What? When privately run charters drain millions from public school budgets, while leaving them with the hardest to educate kids?

Then see how the Georgia privateers are pushing their own referendum to allow the state education commissioner, appointed by the Governor, to take over struggling public schools and give them over to charter management companies. 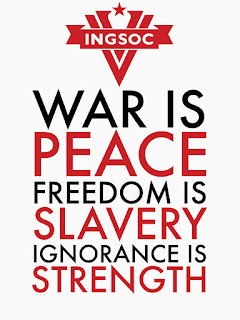 On the ballot, the referendum is described this way: "Provides greater flexibility and state accountability to fix failing schools through increasing community involvement."  One man rule and disempowering locally elected school boards will lead to increased community involvement?  Come on now!

It's another example of how the corporate reform lingo resembles nothing more than Orwellian doublespeak, as in the novel 1984, where the Ministry of Truth proclaims to the masses, "War is Peace; Freedom is Slavery; Ignorance is Strength."


In Georgia, state takeover and privatization is portrayed as increased community involvement, just as Bill Gates and the ed tech profiteers have been trying to convince parents that computer-based instruction is "personalized learning."

But their real motto is this:  Let's hire the best spinmeisters money can buy, and hope they manage to fool the public into approving their anti-education, undemocratic schemes.
Posted by Leonie Haimson at 8/27/2016 02:56:00 PM