On Wednesday, will CAP convince on testing? Will the scandal-plagued Computer company CCS rehabilitate its image? Doubtful at best

Correction: this post originally said the event was happening Tuesday; it's actually Wednesday.

City and State just announced their annual Education Forum, to take place on Wednesday, August 17.  It has the usual cast of corporate types and establishment figures, but still there are some surprises.

The panel on "Standards and Testing: What works, What Doesn’t' doesn't include any representatives from anti-Common Core and opt-out groups.  The historic success of their grassroots movement caused the Governor and other NY officials to switch positions on high-stakes testing,  and led to 250,000 students opting out of the the state exams this year.

Instead, along with Betty Rosa, the Chancellor of the Regents, and Commissioner Elia, the panel features representatives of Gates-funded groups that are relentless promoters of the Common Core and high-stakes testing that parents have already rejected in huge numbers: the Urban League and the Center for American Progress.  (The National Urban League has received $1.3 million dollars from Gates since 2015; the New York Urban League nearly $500,000 since 2014.  The Center for American Progress  has received $4.5 million  in Gates funds for its K12 advocacy since 2010.) 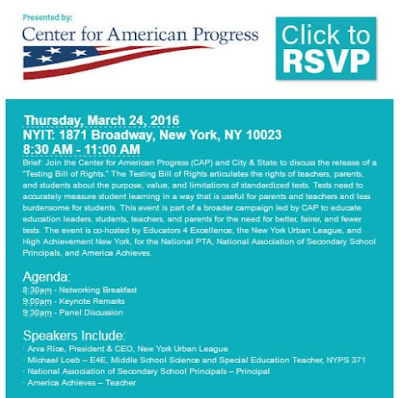 The discussion is supposed to center on CAP's "Testing Bill of Rights" which was released with much fanfare last March, but has since sunk like a stone.  Not surprisingly, it does not include the right to opt out of excessive, unreliable or flawed tests.

CAP along with City and State had planned a press conference in NYC on March 24, right before the testing season, but the event was mysteriously cancelled at the last minute. It was supposed to be co-hosted by another bunch of NY Gates-funded groups including Educators 4 Excellence ($4M) and High Achievement NY (which doesn't disclose the source of its funding, but has admitted the bulk of it comes from Gates.).

Instead, a press call was hurriedly scheduled with Governor Markell of Delaware and the President of the National PTA -- another Gates-funded organization, "to focus on the right of teachers, parents, and students to high-quality tests that accurately assess student learning and help teachers understand how to improve instruction" -- none of which is true of NY exams, of course, or likely any of the other Common Core tests around the country.

The day before the press call, CAP also released  a very unfunny video on Unfunny or Die, satirizing clueless parents who throw away all their daughter's books and put tinfoil on her head -- supposedly to protect her against the Common Core.   This condescending video was widely criticized from the right and the left, and justly sank like a stone as well. As Peter Greene put it, "anyone who is familiar with Common Core or the criticism of it knows that CAP isn't just taking shots at a straw man, but a picture of a straw man pinned to the straw lapel of a straw suit being worn by a straw man."

in an interview in the the Washington Post, Melinda Gates  said they will continue to "stay the course" but acknowledged the fight to save the Common Core and high- stakes testing will now devolve to the states.  She said their Foundation will have to focus more on "community buy-in".  Apparently not satisfied with the lack of success of all the other organizations the Foundation funds in NY,  last week yet another pro-Common Core organization was launched with Gates money: a NY chapter of the DC-centered Education Trust (EdTrust has received over $2.8 million from Gates in 2016 alone).

One has to wonder how much CAP (or really Gates) paid for their prominent position in this forum, to try to re-introduce their lemon of a "Testing Bill of Rights." So here is clueless CAP's try number three, an attempt to spread their pro-testing message in the opt-out capital of the nation.  And you know what?  Gates is wasting their money on this one as well.  It ain't gonna work.

But the real surprise of the forum is the next session.  This is how it's billed; exclamation points and all:

Emerging Trends in Education: City and State moderates a panel of officials, experts and academics on improving tech access in and out of classrooms, STEM learning in NY schools, and how to make NY more competitive across the globe!  The session will connect educators, administrators, and other staff to new ideas, best practices, and each other.

The panel includes Josh Wallack of DOE, CM Danny Dromm, chair of the NYC Council Education Committee, a dean from Berkeley College, and two corporate reps, one of them named Vlada Lotkina, Co-founder and CEO of a company called Class Tag, which has a particularly awful privacy policy.  The other member of the panel is Cynthia Getz, descried as the NYC Account Team Senior Manager at Custom Computer Specialists.

Custom Computer Specialists is infamous for having participated in a multi-million dollar kick-back scheme with a DOE consultant named Ross Lanham, who was indicted by Preet Bharara in 2011 and sent to jail in 2012.   CCS had not only gotten inflated payments through the scheme, but the President, Greg Galdi (who is still the CEO) had started a Long Island real estate company with Lanham called "G & R Scuttlehole.”

In February 2015, I noted in the PEP contract listing that CCS was due to get a huge $1.1 billion contract from DOE for internet wiring   Reporters for the Daily News , NYPost  and Chalkbeat  wrote about this egregious deal, and overnight the DOE cut back the contract to $635 million, without changing any of  the terms, showing how egregiously inflated it was in the first place.  The Panel for Education Policy rubber-stamped it anyway. Later, City Hall decided to reject the contract, probably because of all the bad publicity, and it was rebid at a savings of between $125M and $627M - the latter compared to the original contract price of $1.1 billion.

I think the cancellation of the CCS contract actually saved the city up to $727 million, because if the DOE had signed up with CCS, they would have lost any chance to get $100 million in E-rate reimbursement funds from the feds, since the FCC had cut NYC off from all E-rate funds because of the Lanham scandal since 2011.

Subsequently, we discovered that DOE signed a consent decree with the FCC on December 31, 2015  in which the city was ordered to pay $3 million in fines, and relinquish claims to all E-rate funding requests between 2011-2013, which were frozen after the Lanham indictment in June 2011.  The DOE also had to withdraw claims to any E-rate funding from 2002-2010.  Juan Gonzalez  speculated that this meant the potential loss of $123 million, based on a letter sent to the DOE by the Comptroller office in 2014.

Yet that turned out to be a huge underestimate.  I subsequently found this chart online, showing what the DOE claimed in E-rate funds between 2011 and 2015 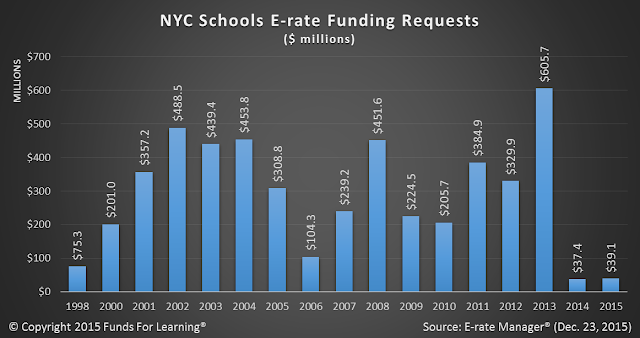 As one can see, the DOE had actually requested more than $1.3 BILLION in E-rate funds between 2011-2015, than they had to renounce, as well an unknown amount before that.

In addition to the $3 million fine, the FCC consent decree also required the DOE take the following measures:

So the total cost of the Lanham scandal has turned out to be nearly $5 million, including the $3 million fine and the hiring of independent monitors, with another  $1.3 billion more in lost potential reimbursement.

In addition, the E-rate consent decree included this provision:


For purposes of Subparagraph 3(c), an “affiliation” means a situation "in which a person, organization, or other entity is associated with Lanham or Lanham Enterprises as an employee, employer, subordinate, subsidiary, consultant, contractor, subcontractor, member, agent, supplier, or partner, or in any comparable capacity, or has been so associated at any time since five years prior to the Effective Date, except that no E-rate Program Personnel has an affiliation with Lanham or Lanham Enterprises merely as a result of Lanham’s prior status as a consultant to NYC DOE."
Whether that includes CCS is unclear.  Recently, the NY Post reported that DOE still has numerous contracts with CCS, despite an earlier warning from the Special Investigator:

“It is . . . recommended that the DOE refrain from contracting or subcontracting with Ross Lanham and any company associated with him,” the Special Commissioner of Investigation said in a 2011 report.

Despite the red flags, city records show that the DOE registered nine fresh contracts with CCS worth roughly $21.5 million over the last several years — though a major, $637 million deal was voided in 2015 when watchdogs cried foul.
We found through Checkbook NYC  that as of May 18, 2016, CCS had six active contracts with the DOE and the School Construction Authority, with the DOE/SCA already paying them more than $8 million during this year alone.   Will CCS be asked any questions about their history of corruption?  Will they manage to rehabilitate their image? One should be as skeptical about this as that CAP will convince parents that the state tests are worth taking.
Posted by Leonie Haimson at 8/14/2016 11:00:00 PM

Absolutely damning. Leonie, where are the investigative reporters who should be doing this work (that you are doing so well)?