So it happened; DeVos was confirmed. What next? 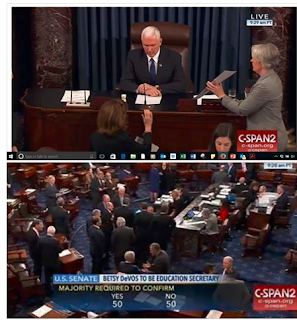 So it happened as predicted; Mike Pence cast the tie-breaking vote for Betsy Devos this afternoon.
Though disappointing it was in its way historic: the only time in US history that a Cabinet secretary needed the vote of the Vice President to be approved.

The last few weeks have been historic in another way:  Never have parents, teachers and concerned citizens been so outraged and activated over an education official or issue.  Never have so many called, rallied, protested, faxed and written letters to their Senators, in an "avalanche" that nearly flattened Capitol Hill, overwhelming and shocking Senators of both parties.

In CSPAN's 24 hour, all night coverage of the debate over DeVos nomination, the Democrats read aloud numerous letters from their constituents, eloquent passionate and smart, begging them to reject DeVos as the most unqualified candidate ever to be named as Education Secretary, whose qualifications were based primarily upon her family's wealth.  In every past administration  no matter how conservative, she would have been named Ambassador to Luxembourg or something similar. 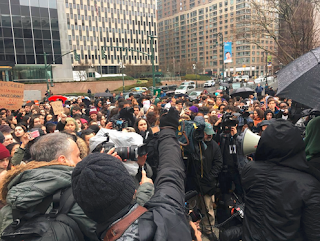 Even after the vote there were protests.  NYC high school students walked out of their schools en masse, in a stirring show of resistance.

So call your Senators and thank them if they voted "No"; if they voted otherwise, let them know what you think.  NPE has a list of all the Senators, their votes, and phone numbers.

We need to sustain the activism and involvement we exercised in this battle and keep speaking out loudly and firmly to let education policymakers at the federal, state and local levels know that we will not stand idly by while our public schools are defunded, dismantled and privatized. 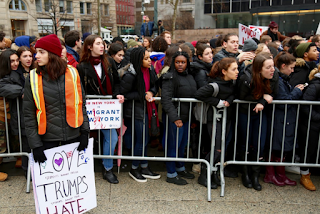 One issue little noticed by the media:  it was widely recognized how avid Betsy DeVos has been to allow for-profit charters and vouchers to draw funds from the public schools.  What was little noticed is her devotion to online learning and questionable ed tech solutions. These will just as surely divert resources from the proven strategies that provide students with the support  and human feedback they need.   It was reported  that the one financial company she refused to divest from is Neurocore that runs "brain performance centers” via biofeedback to treat autism and attention deficit disorder with no evidence of efficacy.

In 2015, while speaking at SXSW Edu, that annual Kumbaya gathering of the technology tribe, DeVos sounded exactly like Bill Gates:


“It’s a battle of Industrial Age versus the Digital Age. It’s the Model T versus the Tesla. It’s old factory model versus the new Internet model. It’s the Luddites versus the future. We must open up the education industry — and let’s not kid ourselves that it isn’t an industry — we must open it up to entrepreneurs and innovators.
This is how families without means will get access to a world-class education. This is how a student who’s not learning in their current model can find an individualized learning environment that will meet their needs.
We are the beneficiaries of start-ups, ventures, and innovation in every other area of life, but we don’t have that in education because it’s a closed system, a closed industry, a closed market. It’s a monopoly, a dead end. And the best and brightest innovators and risk-takers steer way clear of it. As long as education remains a closed system, we will never see the education equivalents of Google, Facebook, Amazon, PayPal, Wikipedia or Uber. We won’t see any real innovation that benefits more than a handful of students."

Surely, we will need all your activism in the battles to come - whether it be against the expansion of charters, the use of tuition tax credits or vouchers, or wasteful ed tech scams -- all of which would divert precious resources from our public schools. Now that we've woken up our elected officials to the fact that parents and teachers and citizens fiercely love their public schools, and will do nearly anything to preserve, protect and support them, we must continue to speak out. As Patty Murray tweeted this afternoon,


"To the parents, teachers,  and students who made their voices heard: We hear you and the fight isn't over. #DeVos"

Email ThisBlogThis!Share to TwitterShare to FacebookShare to Pinterest
Labels: Betsy DeVos, Mike Pence, what next