What went wrong with the selection of Carvalho as Chancellor 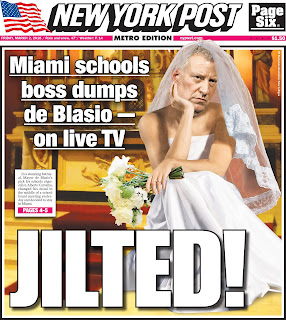 If you live in New York City , you know we've had a wild time during the last 24 hours. On Wednesday night the news broke that the Superintendent of Miami-Dade schools, Alberto Carvalho, had been selected by the mayor as our next Chancellor, but then Thursday morning, during a live-streamed Miami-Dade school board meeting, Carvalho changed his mind.

This has caused considerable embarrassment for de Blasio, as evidenced by the NY Post cover above, though some say that Carvalho's unexpected flip-flop wasn't the Mayor's fault.  Yet if Carvalho had gone through a public vetting process as occurs in other large school districts like Boston or Los Angeles, his school board and community would have had the opportunity to entreat him to stay in advance of the final selection, he could have withdrawn his name, and all this wouldn't have blown up in the Mayor's face.

In support of de Blasio's intransigence, someone in his office argued, "In terms of public process, the tendency of elected boards across the country to have public searches is, in my opinion, one of the challenges of school governance.  I think it adds to the instability and turnover of leadership in districts because boards lose commitment to their superintendents when they hear that the superintendent has entertained a conversation with another district."

Really?  Did that happen in the case of Carvalho?  Did he lose face with his school board when they found out he had "entertained a conversation" with de Blasio?  Quite the opposite I would say.

Instead, the sequence of events is being compared by reporters to the Cathy Black fiasco.  Like Bloomberg's selection of Cathy Black, this vetting process has been overly secretive and unprofessional - with no search firm hired, and with no one on the outside even aware of who at City Hall is involved in carrying out the search.  Though the Mayor has been asked by reporters to divulge who is involved in the process, he refuses to say.  I've had people who are potentially interested in the job asking me how to apply, and I couldn't tell them anything.

Even after this recent PR disaster, the Mayor and others in his coterie refuse to make the names of candidates they are considering public, because it might cause too much embarrassment for those who may eventually be rejected.  To that I say, really?  If applicants are going to be so sensitive then they're not tough enough for the Chancellor job, heading the largest school district in the nation.


If the Mayor is going to consider the possible hurt ego of someone he might reject over the interests of the 1.1 million school children in the public school system, that's wrongheaded.  Instead, he should live up to his promises when he first ran for office that there would be a "serious public screening" rather than select a Chancellor who is "pushed down our throat."  Yet now he refuses to even meet with the parent leaders who asked to talk to him about how they could best have their voices heard.

Of course there are even more reasons to let parents and other members of the public have a say in the vetting process.  As the new chair of the NYC Council Education committee Mark Treyger  said, "The best decisions are the most informed decisions...you have to involve critical stakeholders."  Or as Diane Ravitch asked, it's time for Mayor de Blasio to institute an open inclusive process, with parents and educators involved in the decision.

In contrast, check out what's happening in Seattle which is also looking for someone to head their schools.  There, the school board has publicized the name of the search firm, "Ray and Associates, a national leader in superintendent search processes, to assist us in this critical work" as well as a posted a survey, asking the public what qualities they would like to see in their next Superintendent:

The critical nature of the NYC Chancellor's job was exhibited Wednesday night, when the Panel for Education Policy voted to close ten schools, after a raucous meeting lasting more than seven hours, filled with the raucous protests of hundreds of teachers, students and parents. Only two schools were spared, PS/IS 42 and MS 53, both in Queens, with the vote postponed on the fate of the Health Careers and Sciences in Manhattan. This was a heartbreaking scene that we lived through repeatedly during the previous administration, and hoped would never happen again.

See my testimony to the City Council on this point, and about how the DOE has repeatedly botched its policies to improve these schools. You can also check out my summary of Tuesday's Council hearings, including the DOE's inconsistent and often arbitrary rationales for putting schools in the Renewal program in the first place, and then deciding which schools to close.

Among the other non-Renewal schools that the PEP voted to close last night was PS 25 Eubie Blake in Brooklyn -- despite the fact that, according to the DOE's own analysis, it has shown fourth highest positive impact on student achievement of all the 633 elementary schools in the city. More on this here.

If and when we get a new Chancellor, let's pray the person will be someone who is better at listening to parents, supporting students and teachers, and strengthening schools. I hope that it will be someone who has shown she has the mental toughness to survive in the tough NYC political environment, a willingness to collaborate, and a proven record of improving schools.  Potential candidates who exhibit such qualities include Betty Rosa, Chancellor of the Board of Regents and Regent Kathy Cashin, both of whom had spectacular record of achievements as District Superintendents in the Bronx and in Brooklyn.