After waiting two years for DOE to respond to my FOILs, I filed an appeal 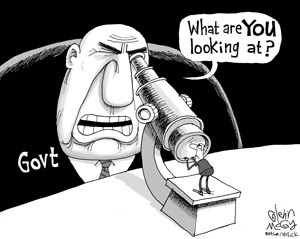 More than two years have passed without a substantive response to three Freedom of Information Law requests to the NYC Department of Education, so yesterday I filed an appeal with General Counsel Howard Friedman, pointing out these are "constructive denials" and thus violate the state FOIL law.

The subjects of my requests are quite clear and the DOE should have easy access to this information.  It should have taken no more than a week at most to deliver to me data on their spending on technology, their spending on charter school leases and renovations, and to provide privacy agreements between DOE and third party organizations with whom they share personal student data.

Yet in no case have they produced any of this information, but have sent me the same boilerplate letters every four weeks or so, saying that "due to the volume and complexity of requests we receive and process, and to determine whether any records or portions thereof will be subject to redactions permitted under Public Officers Law §87(2), additional time is required to respond substantively to your request.”

In all three cases, three to six months have passed since I've heard anything at all from DOE about my requests, though all three are still listed as "Open" on the Open Records dashboard, here, here and here.

The NY Post sued the DOE in 2016 over its continual delays in responding to its FOILs, which they identified as "constructive denials."  Here is their legal petition  and here the memo of law.

The Post settled the lawsuit  in April 2018, when the DOE "agreed to reform what The Post called a 'pattern and practice' of endless delays and stonewalling" and to revise their "rules to halt the indefinite postponements — and stick to reasonable deadlines. New guidelines were approved in November."  I was quoted in the article as remaining skeptical.

The DOE revised the Chancellor's regulations on FOILs last December,  though the DOE FOIL page still posts the previous Chancellors regs from 2009, so you can see how seriously they take these new rules.   (The head of their FOIL office, Joseph Barandello, is also the DOE chief privacy officer who also keeps busy justifying DOE's violation of FERPA, including making student personal information to charter schools for recruiting purposes without parental consent.)

According to the new regs, the DOE was supposed to be more specific about its reasons for delaying responses, and to provide a more certain date when the request would be fulfilled.  As I write below, the only difference I saw was longer boilerplate  prose describing in more verbose terms exactly what they had earlier claimed, a longer gap between letters, and then no letters at all.

Analyses by Village Voice and Chalkbeat have found that the DOE is the worst record in responding to FOILs of any city agency.  The Mayor's overall record on this is particularly deplorable, since as Public Advocate he made the city's poor performance in responding to FOILs one of his signature issues and promised during his campaign to improve the process.

In response to a KidsPAC survey, he pledged the following: "I have a record of transparency and will ensure that under my administration, the DOE will be in full compliance with FOIL. As Public Advocate, I monitored and reported on the city’s compliance with the Freedom of Information Law (FOIL)."

Yet if anything, the DOE's performance on FOILs is worse now than it was under Bloomberg.

According to the Chancellor's regs, the DOE General Counsel is supposed to "issue a written decision on the appeal within ten (10) business days following receipt of the appeal and fully explain in writing the reasons for further denial, or provide access to the record sought."  I'll let you know if and when he does respond, and let you know what he says.

If he doesn't provide the information I've requested I will take it to court.  It is now easier to obtain legal representation as a new state law on FOILs  approved in December makes "attorney’s fees awards compulsory where a government agency had 'no reasonable basis' for denying access to a request."

It's extremely disappointing that the DOE still gives boiler-plate excuses to delay release of public information, and even fails to communicate at all. In its lawsuit, the NY Post negotiated reforms that the DOE agreed to carry out, but apparently is not doing so.

Leonie, without getting too specific in this public comment, I think you might have been able to speed up DOE’s FOIL process.

Check out these searches: