Another disappointing UFT contract when it comes to helping kids learn

UPDATE:More from the UFT on the new process for addressing violations of the class size cap in the new contract here:   All class-size overages that the chapter leader and principal cannot resolve by the 10th day of school will be sent to the UFT district representative and the superintendent to work to fix and later up to a central class size labor management committee. Does this sound like it will lead to speedier resolution than the process now?

----------
Today the Mayor, the Chancellor and UFT President Michael Mulgrew announced a new tentative four-year contract. In contrast to their claims that it is innovative and far-reaching, the provisions of the agreement seem familiar in many respects, a retread of past failed efforts. I can't really comment on the salary, health insurance or other financial provisions. Instead, I looked more specifically as to whether the contract is likely to improve learning conditions, and my prediction is no.

Class size limits weren't altered, which haven't been lowered in fifty years and which since the 1960's have range from 32 students per class in grades 1-5 to 34 students in high school. The only apparent policy change to class size in the UFT summary is this brief passage: Class size overcrowding must be remedied within 10 days.


I assumed that meant when contractual class size violations are grieved by the union, they will be remedied by the city within 10 days. However Arthur Goldstein, Francis Lewis HS chapter leader, has more details on his blog:

Class size will not change. Action for oversized classes must be taken within 21 days. Chronically oversized schools will have only ten days. These will go to superintendent and chancellor and will hopefully result in fewer arbitrations.


This description doesn't address when the grievance can be made - right now, teachers and chapter leaders have to wait ten school days before even filing a class size grievance, and only a set number of grievances can be heard by arbitrators each week, which considerably slows down the process of holding class size to the legal limits.

If teachers (and their students) have to wait another 21 days to have the violations addressed this could drag on until November and December, as too often happens currently. Not to mention that there are many loopholes in the contract which continue to allow schools to evade these limits, which are already far too high. There's no mention if any of these contractual loopholes have been eliminated or tightened.


Rather than address the crying need to cap class sizes at lower levels, especially in struggling schools, the contract seems to feature but a variation on the failed Renewal school initiative. Here is an excerpt from Carranza's letter:

At the heart of this groundbreaking contract is The Bronx Plan. The Bronx Plan is a partnership between the DOE and the UFT that allows us to recruit and retain educators through the use of a targeted salary differential in schools that have, in the past, struggled to attract and keep teachers in key subjects. The Plan also creates the Collaborative Schools Model – an idea grounded in the knowledge that our schools perform at their best when teachers, leaders, and staff work together to solve longstanding problems.


Like the Renewal schools, the Collaborative Schools Model or the Bronx Plan [couldn't they settle on a more compelling epithet, or at least choose between them?] will supposedly feature more teacher and community "collaboration" --which usually seems to be nothing more than a public relations fig leaf, especially when it comes to heeding the parent voice.

Also like the Renewal schools, teacher incentive pay will be provided to recruit teachers to these struggling schools. In the case of the "Bronx Plan" or the "Collaborative Schools Model," $8,000 will be offered to teachers who fill hard-to-staff positions.

Many other districts have used incentive pay to try to attract teachers to struggling schools without much success. In 2014, Fulton County schools in Georgia announced a plan to recruit teachers to the lowest-performing schools by offering them $20, 000 stipends:

A year later, in 2015, the AJC checked on the progress of the Fulton pilot and found the district laboring to lure these highly qualified teachers to lower-performing schools....Although 375 were eligible to participate, only 32 applied....So what finally happened to the Fulton experiment? It faded away.

The Renewal schools also featured a $4.9 million teacher-leadership program which "several principals said it has not been much help as they try to recruit teachers from other schools."

This same sort of teacher leadership program will now be expanded citywide, to create "Teacher Development Facilitators" and "Teacher Team Leaders," the latter to train more "Master Teachers, Model Teachers, and Teacher Development Facilitators." All of these positions will likely take more teachers out of the classroom and add them to the bureaucracy, rather than deploy their talents more effectively by deploying them where they can teach kids.

I predict that the "Collaborative Schools Model" will go the same way as the Renewal program, and the Klein era data inquiry teams, and will continue to leave thousands of students behind, that is, unless support, focus, and funding is put on lowering class size in these schools.

There are other aspects of the new contract that appear to be going in the wrong direction. For example, students in the Bronx will be put on computers to receive distance learning from their teachers, instead of offering them the close, in-person support that they need:

Remote teaching pilot: Starting in Spring 2019, Bronx high school students will participate in a 3-year, remote-teacher pilot program. These courses will be led remotely by teachers, who will be able to engage their students and answer questions in real time. The pilot will expand access to AP courses, advanced foreign language courses required for an Advanced Regents Diploma, and elective courses, allowing schools to expand course offerings.

Clearly, the Chancellor and the UFT haven't paid attention to the research showing online learning rarely works, except for the most motivated, self-directed students.

Another disappointing aspect of the agreement is the way Mulgrew seems to have traded pay raises and other goodies for his support of continued mayoral control that is up for renewal this spring. Mulgrew's position on this issue seemed often to be shape-shifting and depend on who was in the room at the time, but along with the announcement of the contract was his unabashed, full-throated assent to submit to the mayor's top priority, and allow him to continue his one-man rule into the indefinite future:

" Given the importance of the issues and the long-term initiatives that are part of this contract, the UFT is calling for the continuation of mayoral control as the governance structure for New York City public schools.”


One wonders if the UFT membership gets to vote on that issue separately; or if the organization itself operates similarly as one-man rule.

It's not as if the members of the UFT are unconcerned with this issue, as its leaders must know.  See the 2014 UFT survey of NYC teachers that showed that 99% of respondents said reducing class size would be an effective reform -- outstripping every other option.  (Though the survey is supposed to be given every year, I couldn't find any posted since that year. If others can, please provide the link in the comment section.) 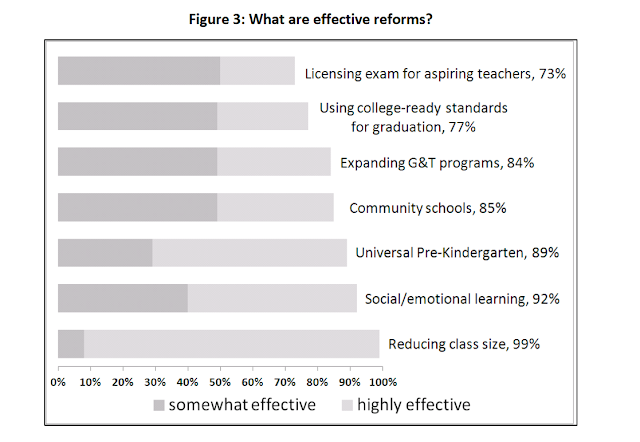 In contrast to the lack of attention given class size in this new contract, see how Nevada teacher Angela Barton just wrote about the frustration of growing class sizes and how it relates to teacher attrition on the We Are Teachers blog:

"With these large numbers, it has become increasingly more difficult to recognize students that may be struggling...It’s almost like they are invisible.” It’s true. The more students in one room, the louder, smellier, and more distracting it becomes. Individual teacher-student interactions and meeting student needs are impossible....

We know firsthand that teacher and student morale, along with academic and social development, suffer with larger class sizes.

We also know that smaller class sizes would help restore the joy of teaching and retain quality educators. Routinely, state legislators who vote on education funding choose to ignore the voices of teaching professionals.

So what’s next? I think it’s time we take action, raise our voices, and walk hand in hand with parents and community members to our legislatures and other governing bodies. We can not and will not be crowded out of our own classrooms.

In fact, according to an analysis of the Economic Policy Institute, the teacher gap keeps growing nationwide -- with nearly 400,000 jobs lost since the recession just to keep up with student enrollment growth, meaning larger classes as well: 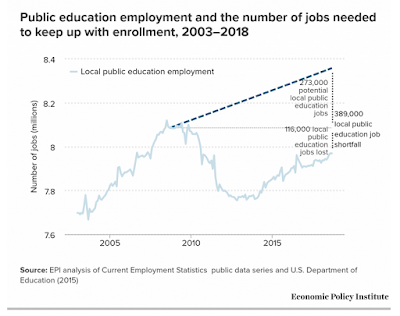 Rather than passively give in to these conditions, other teacher unions have made class size a central focus in their negotiations; most recently in Los Angeles. Let's hope for the sake of NYC kids we don't have to wait another fifty years for the UFT to do so.
Posted by Leonie Haimson at 10/11/2018 07:56:00 PM