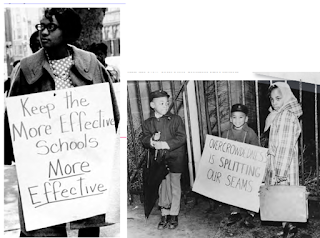 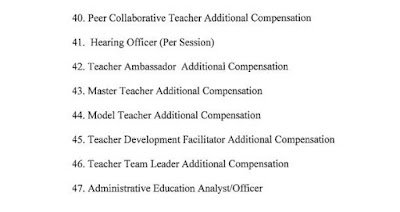 These new higher-paid positions are also supposed to reduce teacher attrition at these schools, but there is little or no evidence that supplementing salary will work – as opposed to reducing class size, which has been shown to improve teacher retention rates in many studies, including as noted in the research on the More Effective Schools.
In an article in City Limits, David Bloomfield, education professor,  pointed this out:
“David Bloomfield, an education professor at Brooklyn College and the CUNY Graduate Center, expressed surprise that the UFT agreed to differential pay for teachers in different locations. He also stressed that salary issues were not often at the forefront of teacher’s concerns in high-need schools and districts.
“The main issue is the difficult working conditions in some of these schools brought on by large class sizes with concentrations of students with the greatest challenges,” he says. “Whether a salary increment will increase the staffing stability or improve the learning of those children is open to question.”
A teacher with the initials JTS left this comment: Agree with the final comment. Working in a tough school can be a completely different job than in a school with few problems. Its not worth your sanity for an extra $5000-8000. They should increase that amount or better yet, change working conditions, such as by reducing class sizes or having more effective discipline and support systems in these hard-to-staff schools.
The Renewal schools, the previous program for struggling schools which the previous Chancellor Carmen Farina created has had inconsistent results. As part of a $4.9 million teacher-leadership program, these schools were provided the opportunity to raise salaries by  $27,500 for top teachers willing to take on leadership roles; yet  a Chalkbeat investigation found  that nearly 40 percent of teachers at schools in the Renewal Program in 2014 had left after two years.
According to the new UFT contract, the Bronx Collaborative schools will not only be offered new categories of higher paid mentor teachers, but will also “priority consideration for centrally funded initiatives such as Equity and Excellence initiatives, air conditioning, physical education and others that align to the schools' goals. "
But apparently not class size reduction, which would give them the greatest opportunity to engage their students, leading to more learning and better outcomes.  Our analysis of Renewal schools showed that the ones with the smallest classes were most likely to succeed.
In a UFT teacher survey from 2013 – the most recent one publicly available - 99% NYC teachers responded that class size reduction would be an effective reform  to improve NYC schools.  About 90% said that this would be a “very effective” reform – far outstripping any other proposal. 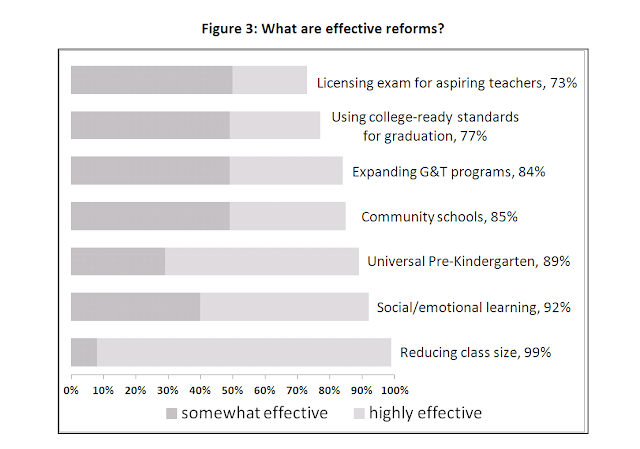 If the UFT leadership was doing anything else to push for smaller classes, either through court action or advocating for targeted funding for class size reduction through the state or city budget, their lack of attention given to reducing class size in the contract would be more understandable.  Sadly, for too long, they remain Missing in Action on this crucial issue.
Posted by Leonie Haimson at 10/23/2018 05:00:00 PM

I agree that class sizes need to be made smaller. But there is nothing preventing the district from unilaterally lowering class sizes. They should. And the comparison with LA leaves out some important background: https://www.utla.net/get-involved/issues/class-size

Great piece Leonie. Thanks for the history review.