Elizabeth Rose resigns from DOE; who will take her place but hopefully not adopt her positions and policies? 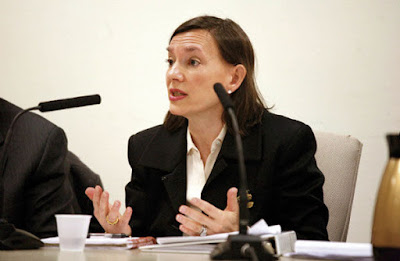 Former Deputy Chancellor Elizabeth Rose resigned yesterday.  Her resignation letter to DOE colleagues below recounting her record omits the countless school co-locations she pushed through despite huge parent and community opposition, her failure to address school overcrowding honestly with accurate reporting and reasonable enrollment projections, and her view that neither class size nor school overcrowding matters in terms of student learning.

All these attributes and beliefs reflected the same ideological biases that she carried over from Joel Klein, who first plucked her from the corporate world to appoint her as Director of Portfolio Planning in 2009. This division was in charge of pushing through unpopular school closings and charter school co-locations, and throughout multiple hearings, Rose appeared indifferent to parent and student concerns. Others who preceded her in this job during the Bloomberg years include the current Superintendent of Louisiana schools John White and the head of the pro-charter Walton Family Foundation Marc Sternberg. Rose then rose through the ranks swiftly to become Deputy Chancellor Kathleen Grimm's chief of staff, and after Grimm died, inherited her position.

Though Rose mentions the removal of PCB lights in her resignation letter as one of her proudest achievements, she omits the fact that DOE faced lawsuits and EPA pressure that forced them to speed up the PCB removal process.  She also doesn't mention the months of delay before DOE began to test school water for lead according to the new state law, and the confusing and even dishonest messages she put out about this issue to reporters and parents.


It probably didn't help her case either that Rose was revealed to have engineered a secret, illegal deal with Eva Moskowitz that she could move a new Success charter middle school into the PS 25 building after DOE closed the school, without going through any of the legally mandated process for changes in school utilization.  This move was only forestalled when the parents of PS 25 won a temporary restraining order against closing their school.

Her resignation comes after her two major demotions in recent months; first her removal by Chancellor Carranza from the Deputy Chancellor position to a new post entitled "CEO of School Operations," and then, after the busing scandal broke, a further demotion to “senior contractors advisor for transportation."

Goldmark served during the Klein years as Vice President of  the controversial Leadership Academy, which was known for training non-educators to be principals, who when assigned to schools were too often shown to be inept and/or corrupt.  Moreover, the DOE's spending on the program was later found to be riddled with "waste, fraud and abuse," according to a scathing audit by the City Comptroller. 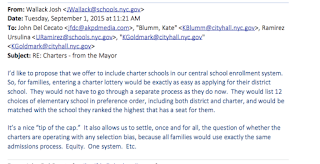 Incidentally, in  emails recently released by the Mayor's office after the NY Post and NY1 successfully obtained them via a Freedom for Information lawsuit, both Goldmark and Wallach were revealed to have been in favor of adopting a Unified Enrollment plan for the DOE in 2015 that would have helped recruit NYC students to charter schools.


This enrollment system has been supported by the Gates Foundation which awards additional funding to districts that agree to adopt it, and has been heavily promoted by Gates-funded pro-charter advocacy groups like the Center for Reinventing Public Education.

Though as Chalkbeat notes,  "De Blasio's aides quickly worked the idea into a draft of his 2015 speech," an excerpt of which is to the left, the Mayor deleted this passage and did not adopt the system. The final speech delivered September 15, 2015, and entitled "Equity and Excellence" is posted here.

When I first joined the DOE in 2009, I never imagined that I would still be here nine years later.  I can honestly say it is because I have loved the work we do, and loved serving our students and this City.

The last 9 years have been the most interesting, fulfilling, and exciting stage in my professional career.  I have had the opportunity to see long-term projects from inception to completion: the building of new buildings, the first graduating classes of new schools I helped open, the removal and replacement of all PCB lighting fixtures, identifying gender-neutral bathrooms in all our schools, and expanding universal free lunch to all schools.

Other initiatives will continue, including significant reductions in suspensions and persistently dangerous schools, systematic improvements to accessibility and transparency of information about accessibility, major initiatives to expand and improve physical and health education, to build new gymnasiums, and upgrades to school cafeterias that increased both the number of students eating lunch and their enjoyment of their meal. Over the past three years alone, the PEP approved 174 proposals related to our schools and buildings, and we worked with CECs to approve 18 re-zonings.

None of these would have been possible without the incredible dedication and effort of all the talented people I have had the pleasure and privilege to work with, including those on my teams, those with whom we have collaborated in our shared commitment to improving learning conditions and outcomes for all our students, the parents and advocates I have met, and especially those who have mentored me along the way.

I have served under five Chancellors, and am proud of the work my teams and I have accomplished.

I have decided it is time to leave the DOE, both to spend additional time on some personal needs, and to figure out my next adventure.

New York is a big city, but a small world; I hope we will cross paths again.  It has truly been an honor to serve with you.  Elizabeth

One down, how many more to go?