Will the Mayor and Chancellor halt the practice of allowing charter schools to access student personal information to market their schools, now that the feds and the state have launched investigations of how this violates student privacy? 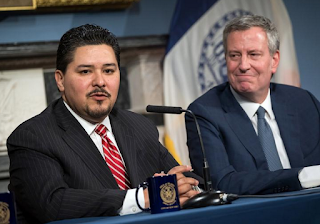 If you’d like to add your voice, please send a letter to the Mayor and the Chancellor to stop allowing charters to market their schools by giving them access to personal student information.

Yesterday, Sue Edelman of the NY Post reported that the DOE is under investigation by both the US Department of Education and the NY State Education Department for violating student privacy law by making student information, including their names and addresses, available to charter schools for recruiting purposes.  The letter in which Dale King, Director of the Family Privacy Compliance Office of the US Department of Education, announced the investigation into this DOE practice is posted below.

This investigation follows from Johanna Garcia's FERPA complaint filed a year ago, which pointed
out that the DOE allows charters access to student personal information to send families promotional materials via  the DOE mailing house, Vanguard Direct, without providing parents with the right to opt out, which would be required under the directory information exception to FERPA.

Instead, DOE wrongly claims the right to share this information with charter schools under the "school official" exception, which is reserved for vendors that are performing services on behalf of the district and need the information to carry out their contracted duties. Yet charter schools are not carrying out services for DOE.   In addition, the use of data for marketing purposes is specifically barred by the NY State student privacy law §2-d: "Personally identifiable information maintained by educational agencies, including data provided to third-party contractors and their assignees, shall not be sold or used for marketing purposes."

Here is the NY Post summary of the DOE claim, and our responses:


In response to Garcia’s complaint, the New York state and US education departments said they are probing whether the marketing deal violates FERPA — a federal law which requires schools to get parent permission before releasing student information, except in limited cases.

The DOE claims an exemption lets it give student information to outside entities to perform functions that its own employees would otherwise do. State law “permits outreach to make families aware of their educational options, including both district and charter schools,” Cohen said.

But Leonie Haimson, co-chair of the national Parent Coalition for Student Privacy, said the reasoning makes no sense: “School districts lose funding and space when students enroll in charters. Why would the DOE use its own employees for that purpose?”

The DOE long-standing policy of making student information available to charter schools started under charter-friendly Mayor Bloomberg and Chancellor Joel Klein, in response to a plea from Success Academy CEO Eva Moskowitz that she needed to "mail 10-12 times to elementary and preK families so she could grow the "market share, " according to emails she sent to Klein and acquired through FOIL by reporter Juan Gonzalez in 2010. Five days after she sent her initial request,  Michael Duffy, then-head of the NYC DOE charter office, wrote back he was trying to "overcome the obstacles" of privacy laws and would do his best to make the mailing addresses of public school families available for this purpose.


The US Department of Education letter from Dale King that is posted below is dated Sept. 25, 2018 and demands a response from DOE within four weeks.  This deadline was October 25 – nearly two weeks ago, yet according to sources, the DOE has not yet responded. Dale King's questions include clarifying how DOE informs parents of their rights under FERPA, and to "provide this Office with information on the relationship between the District and the charter schools to which the District discloses information, particularly Success Academy."
Below the US DOE letter is another letter sent by Council Members, Danny Dromm, Mark Treyger, Brad Lander and Stephen Levin on August 8, 2018, urging Mayor de Blasio and Chancellor Carranza to halt this practice and pointing out how it not only appears to violate student privacy but also the administration's stated priority of supporting public schools rather than encouraging charter schools to expand and drain more funds from the system:

Next fiscal year, the charter sector in New York City is projected to cost the DOE $2.1 billion in annual operating funds and is taking up more space every year in our overcrowded school buildings. It is time to put our public-school students first and focus on improving their education and protecting their privacy.
Only after Sue Edelman began asking DOE about whether they had responded to this letter did the DOE respond to these elected members of the City Council, more than two months later.

On October 12,   Deputy Chancellor Karin Goldmark sent a letter to CM Dromm, in which she repeated the dubious claim that since the state law requires charter schools to enroll high-needs students, including students with disabilities and/or English Language Learners, this somehow exempts DOE from the countervailing restrictions of state and federal privacy law. Though the state charter school law does require charter schools to make efforts to recruit high needs students, this does not mean that DOE is authorized to help them do so by violating student privacy.

Moreover, as Johanna has pointed out, despite multiple mailings, her family has never received a letter from Success Academy in Spanish, even though there are large numbers of Latino families in District 6 where she lives.  And as mentioned in her complaint, the only one of her children to receive Success marketing materials is the one child without an IEP.

A recent Bronx Ink article reports that only ten percent of NYC charter schools enroll  as many English Language Learners as the school districts in which they're situated, including few if any Success Academy charter schools.  The article focuses specifically on Success Bronx I in District 7, where the number of ELLs has fallen in half -- from 8% to 4% -- since being reauthorized by SUNY two years ago.  This percent is tiny compared to the overall numbers of ELLs in District 7 public schools, in which ELLs vary between 16% and 22% depending on the grade level.  So despite millions spent on marketing and mailings, the DOE claim that making personal student information available to Success and other charter schools somehow helps them enroll their fair share of high-needs students doesn't hold water.


At a Harlem Town Hall meeting last week with Chancellor Carranza, District 5 Community Education Council members and PTA leaders vehemently objected to the supersaturation of charter schools in their community, that drains their public schools of students and funds.  In response,  Carranza insisted that their public schools needed to engage in improved marketing, and that parents should consider "what is the need that charter schools are answering."  (See the video from News 11 here.)

Yet few if any public schools have the resources to put into advertising and recruitment as Success Academy, which spent about  $1,300 for every newly enrolled student in 2011 on marketing.  More recently, Moskowitz had created what is described as a "full service, brand strategy, marketing, and creative division within Success Academy” called the "The Success Academy Creative Agency" according to the LinkedIn profile of its Managing Director, Meredith Levin.  In the previous version of her profile accessed last month, Levin described leading a  "group of over 30 creative directors, designers, copywriters, strategists, e-learning architects & project managers to develop, execute and optimize campaigns to recruit 1,000+ teachers, enroll families, donors, influencers, and cultivate community engagement."

What public school has the resources to compete with that?  And why should the DOE be helping Success Academy, which has repeatedly been sued for violating student civil rights and last year kicked out one quarter of their special needs students in self-contained classes, expand their "market share," especially when it involves violating the privacy rights of public school families?

Let's hope that the Chancellor and the Mayor reconsider this practice and reverse course before the charter schools send out marketing materials to DOE families this fall, via their access to personal student information provided by DOE.