Will the Mayor and the Chancellor allow the School Siting Task Force to comply with Open meetings law, or insist on keeping their deliberations private? 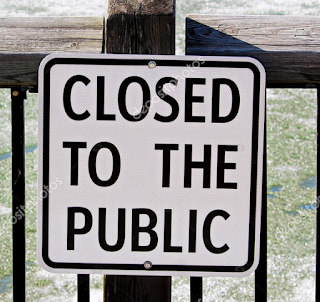 Update 5/619: After the City Comptroller Scott Stringer sent a letter urging the DOE to comply with Open meetings law and allow members of the public to attend these meetings, Chancellor Carranza and SCA President Grillo responded in a letter today, saying the public be would be allowed to do so, though they didn't agree that they were obligated to do so.  Thanks to Comptroller Stringer and Robert Freeman of the NYS Committee on Open Government who wrote the advisory guidance saying these meetings are indeed subject to Open Meetings Law because the task force was a public body created by city law.

In City Limits, Jarrett Murphy reports on the continuing lack of transparency of Mayor de Blasio and this administration.  Freedom of Information requests take months, sometimes years to be responded to.  Meetings of public bodies are closed when they should be open.

In January 2015, we were forced to sue Chancellor Farina and the NYC Department of Education to keep School Leadership Team meetings open to the public.  When Farina decided to close these meetings, we intervened in a lawsuit to keep them open, along with Public Advocate Letitia James, and our pro bono attorneys Advocates for Justice and NY Lawyers for Public Interest.  When we won in the Supreme Court in April 2015, Chancellor Farina still insisted on keeping these meetings closed, and appealed the decision to the Appellate Court.

We eventually eventually succeeded in our lawsuit in October 2016, in a unanimous decision of the Appellate court, but only after Farina had effectively kept these meetings private for nearly two years.

Now there is a new example of the Mayor and his administration to keep private what should be public.  This fall, the City Council passed Local Law 168, to create a School Siting Task Force that would include representatives from several city agencies and government bodies, including the DOE, the City Council, City Planning and the School Construction Authority.  This Task Force is supposed to meet and come up with a report by July 31 about how the city can more quickly acquire sites for new schools to alleviate school overcrowding.

This is a crucial issue, because in many cases, twenty years or more have lapsed because of the apparent inability of the SCA and the DOE to find sites, even when the neighborhood schools are at 120% or more.  This happened in Sunset Park Brooklyn before parents, members of the community and CM Carlos Menchaca became involved in pushing for new schools and identifying appropriate sites.

The SCA itself has very few people on staff and only four real estate companies citywide on retainer tasked with this assignment, and we've been told that they never "cold call" or reach out to owners to see if they might consider selling their properties before they are put up for sale, even though this is the best way to acquire sites for development in the hot NYC real estate market.

As I said last week to a Queens Courier reporter writing about Councilmember Holden's plan to get a new high school built in Maspeth, nearly the only way public schools get built in NYC is for parents and local elected officials to find available sites and then advocate like mad for them to be acquired.

After I heard that the School Siting task force had already met once in secret, I solicited an advisory opinion from Robert Freeman, the Executive Director of the NY State Committee on Open Government.  He confirmed my view that because the task force was created by law, it is a public body subject to Open Meetings Law.  See his letter below.  NYC Comptroller Scott Stringer has also written to Chancellor Carranza and other city officials in support of opening these meetings to the public. His letter is below Freeman's

Yet even after I had shared the opinion from the Committee on Open Government with members of the School Siting Task Force, I heard second-hand that the NYC Corporation Council was holding firm that these meetings should remain private.

Now, in response to City Limit's query, the DOE apparently is reconsidering this position:

A spokesman for the DOE told City Limits, “We are committed to continue partnering with parents and community on this issue, and are exploring how to best solicit input moving forward.”
The agency says it is reviewing whether or not the law requires opening the meetings to the public. If so, those deliberations puzzle Haimson. “This is really a no-brainer,” she says. After all, there’s not a lot of time left to meet: “The report of the task force is due in July.”

Given the acute nature of school overcrowding, with more than half a million students crammed into schools that are at or over capacity, one would think that the officials would welcome public attention, input and support to help solve this ongoing crisis.  Chancellor Carranza himself speaks frequently about wanting to "listen" to parents and "empower" them, but this is impossible if they don't even know what is being discussed behind closed doors.