Schools and coronavirus: listen to the experts 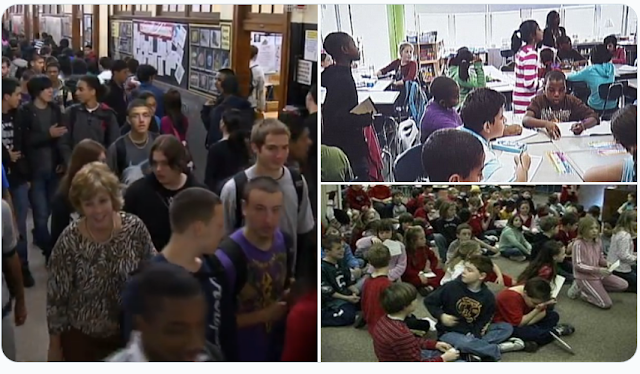 Today, Governor Cuomo held a press conference where he announced that all gatherings with more than 500 people in the state would be banned from now on, and any gathering under 500 would have to cut their legal occupancy level in half, in order to slow the spread of the coronavirus.
Yet schools and public transit will be exempt from these directives.
When asked why schools are exempted, Cuomo’s Secretary Melissa De Rosa responded that there’s no reason to close schools that have classes of forty students at most.  Yet with class sizes as large as they are, and classrooms as small as in most city schools, the person-to-person density is so extreme that the recommendation of “social distancing” of staying six feet apart will be impossible. See the photos above.
Today, the Archdiocese of NY announced it would be closing all its elementary schools (which include Manhattan, Bronx and Staten Island, but not Brooklyn and Queens.)  The Governor of Ohio ordered all schools in the state--public, private, charter--closed for at least three weeks, starting next week, even though only five people in the entire state have tested positive for coronavirus, compared to 328 confirmed cases in New York state, and 98 infected in NYC.  The governors of Maryland, Kentucky and New Mexico have followed suit, with only 13 and 8 and 5 confirmed cases respectively.
When Gov. DeWine of Ohio was asked about the possibility kids would miss the state testing, he said,  “If we can’t have testing this year, we will not have testing this year. The world will not come to an end.”  The US Department of Education also issued guidance tonight that waivers from mandated state testing would be considered for those districts where schools were closed due to the epidemic.

Yet both Cuomo and De Blasio seem adamant that they won’t close the public school system – and even at schools where students or staff have tested positive, they would close those individual schools for only a day, and then consider whether to extend that period.  See this article, about two schools sharing a building in the South Bronx which were closed for one day after the report of an infected student, which de Blasio called a “pinpoint” approach.  The DOE has even apparently refused to close a school in Park Slope, even temporarily,  where a parent tested positive after having gathered with other parents and school staff a week ago at an open school night before knowing he was infected.
At his press conference today, the Mayor said “We will fight tooth and nail to protect our schools – its where children are safe” and it allows parents to go to work.  Yet does keeping schools open really “protect” them, or keep children and their families safe?
A reporter asked what parents who have medically fragile conditions keep their children at a distance.  The Commission of the NYC Health Department Oxiris Barbot said no, they should keep them close especially at this stressful time, until they are showing symptoms .  But this  ignores what is generally understood  by most medical experts, which is that children may be asymptomatic themselves and still be infected and thus extremely effective vectors for further contagion.
Today, a list of 36 eminent virologists sent a letter to the Mayor, urging him to immediately close the schools.
Some of our elected leaders agree.  See this proposal  from the NYC Council Education chair Mark Treyger, which he calls a “temporary contingency plan.”  He suggests that most schools should be closed except for a few in each borough which would be supplied with grab and go meals, medical services, and provide space for those students whose parents do not have any child care alternatives.
Council Members Brad Lander and Richie Torres released a similar comprehensive plan today, devised by doctors and public health officials, calling for city to immediately close schools, among other steps, to stem the contagion:
Suspend classes at public schools, while keeping schools open for emergency childcare for essential workers and vulnerable families. Keep childcare groups small, under 10 kids per group. Close schools immediately and reopen some as centers of family support and mitigation.
For states or districts where schools are closed for extended periods, Doug Harris suggests that the school year could be extended for six weeks over the summer, funded with federal stimulus dollars.

Like Doug Harris, I am extremely skeptical of the efficacy of online learning in general and its privacy implications are seriously problematic, even if most NYC students had sufficient devices and broadband to go online, which they don’t.  Not only does the research show that online learning doesn’t work, it works worst for those students who need the help most, and thus exacerbates the achievement gap.  In this way, it is the opposite of small classes, which narrow the gap.


If the schools do end up closing here or elsewhere,  I believe it would be far better for students to be assigned math workbooks  or packets and independent reading rather than asking them to go online. I highly recommend the Singapore math workbooks which are excellent and relatively inexpensive.
All in all, I would listen to the medical experts, the virologists and epidemiologists. NYC should be following precautionary principle, described this way by Wikipedia: “There is a social responsibility to protect the public from exposure to such harm, when scientific investigation has found a plausible risk. These protections should be relaxed only if further scientific findings emerge that provide sound evidence that no harm will result.” In other words, better safe than sorry.
The letter from virologists follows. 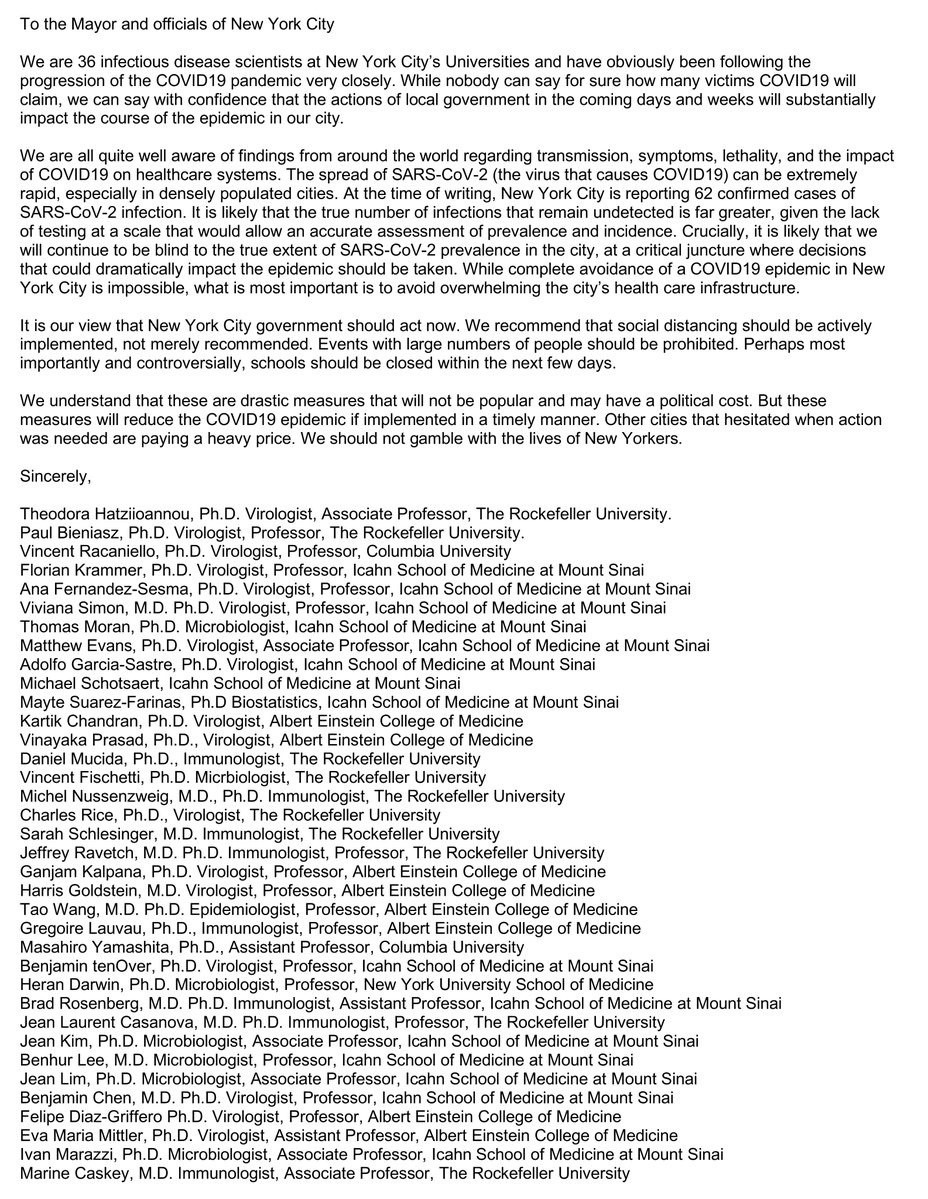 For hundreds of thousands of NYC student school is the safest place to be.I was only sexually molested on the weekends or when school was closed. This was true
for me and so many other neighborhood friends being neglected and abused.The supports being proposed for food, childcare, etc. will not address the thousands of students living in extremely vulnerable situations that will not be identified on any list

Mayor Bill de Blasio I’ve decided to rate you on the same scale teachers are rated on.

Domain 1: planning and preparation
You say that you have been preparing since January, but there are no systems in place for educating, feeding or keeping students safe? There are no measures put in place for teachers safety. You clearly have not designed coherent instruction for the teachers to follow in these trying times. Students are not receiving quality instruction when more than half are absent (both staff and students).

Domain 2: RESPECT! LOL you have shown you have no respect for professionals, staff members, students, parents. There is no respect on either side at this point. As far as establishing a culture for learning: nope. This is a culture of fear and panic. Students cannot learn under these conditions. We are sitting ducks.

Domain 3: Instruction: instead of putting plans in place for remote learning. Instead of providing teachers with the tools they would need to successfully teach from a safe environment and have students learn in a safe environment, students aren’t receiving quality education. New content can not be delivered to less than half a classroom. New content is not being delivered through substitute teachers who don’t have a comprehensive knowledge of the curriculum. Students are not learning as they should be.