Yesterday, the DOE released the preliminary outlines of a “plan” for how schools will be restructured in the fall is they are reopened next fall. DOE officials have determined that to maintain proper social distancing, a range of 9-12 students per classroom will be allowed, varying according to the size of the classroom.

As a result of vastly different levels of school and classroom overcrowding across the city, some schools will be able to offer about half of their students in-person instruction each day; while others may only be able to allow each student to attend school one or two days a week. Or alternatively, different schools will opt for different groups of students attending school every other week or every third week. 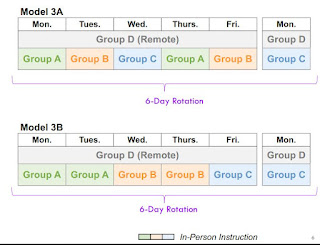 For the most overcrowded schools, there will likely be three cohorts of students with complex schedules (not counting the group who stays home for full time remote learning) as shown to the right.

As usual with most such DOE documents, it provokes as many questions as it answers:
At a Chancellor’s Parent Advisory Council meeting this morning, Chancellor Carranza said DOE will be identifying all individuals who have teaching certification -including himself – and may thus be redeployed and assigned to teach students. This would be an extremely smart move. While according to DOE, the average class size across all schools is 26, the teacher-student ratio is only 14 .

Carranza also said that a minimum of live instruction will be required with remote learning, and that he is working with union right now to ensure this, though with the caveat that he realizes it’s not healthy for students to be on computers too many hours a day.

Clearly the problem of how to maintain social distancing is exacerbated because of the chronic overcrowding of NYC public schools. This fall, at least 275,000 students were crammed into classes of 30 or more, and more than 55,000 students were in classes of 34 or more. 514,450 students attended overcrowded schools (at 101% capacity or more) according to the latest Blue Book from 2028-2019—the annual Enrollment, Capacity, and Utilization Report.

Here is a list of the 92 schools with utilization rates of 150% or more. As of 2017-2018, 42 over-utilized high schools across 41 buildings were already forced to adopt split-sessions in scheduling because of overcrowding, according to a DOE report on Space Overutilization the District planning webpage What this suggests in these severely overcrowded schools, most students will likely only be able to attend school one or two days a week, or one or two weeks out of five.

What is impossible to imagine is how learning next year will be provided equitably, despite the protestations on the DOE planning webpage that “Our vision of educational equity and excellence for all students persists even during this time of crisis.”

First of all, our school overcrowding is worse and our class sizes far larger than those in the rest of the state – meaning students elsewhere will likely be provided with far more face-to-face learning and support . See this chart with the latest available data from the NYSED website: 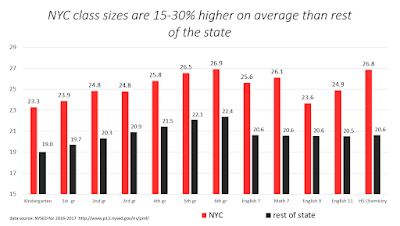 Decades of disinvestment in class size and school facilities by successive Mayors and Chancellors have led to inequities, not just in NYC compared to the rest of the state, but also within the city, with some schools having much larger class sizes and levels of overcrowding.

To make things worse, during both the Bloomberg and de Blasio administrations, DOE officials have tried to squeeze more students into smaller spaces to facilitate school co-locations. The more schools are put into a building, the less instructional classroom space is available to students, because of the need to replicate “redundant administrative or cluster room purposes,” as DOE admits in the Space Overutilization report cited above.

Over time, DOE made other changes to the Instructional Footprint to cram more students into smaller and smaller spaces. The original Footprint from 2008 assumed class sizes of twenty students per class in grades K-3, and 25 in grades 4-5, but in 2009, the DOE increased the class size standards for grades 4-5 to 28 students, and in 2011, they eliminated any class size standards in any schools, except in the case of alternative learning centers, transfer high schools, full time GED programs, and Young Adult Borough Centers. This elimination of class size standards from the Footprint was made without public input or explanation. [Much of this is explained in our Space Crunch report on p. 21]

In December 2014, the Blue Book Working Group appointed by Chancellor Farina proposed that the school utilization formula be revised to be aligned to the smaller classes in the DOE’s original class size reduction plan of no more than 23 students per class in grades 4-8th grade and 25 in high school, rather than 28 and 30 students per class, respectively. These revisions would be necessary if the DOE ever intended to build enough schools to implement a citywide class size reduction plan, as de Blasio promised to when he was campaigning to be elected Mayor. City Hall sat on the Working Group’s recommendations for six months and then rejected them, without explanation, in July 2015.

According to the DOE, parents will soon be forced to make difficult decisions on whether to send their children to school in shifts or keep them at home full time. The online portal to register this decision will open on July 15, with a deadline of August 7. Whether schools will be able to tell parents by then how many days a week their children will be allowed to attend classes in person is unclear, as this in turn may depend in part on how many families decide to opt into full-time learning.

The glaring limitations and complications of these schedules, driven by the excessive class sizes in so many schools across the city, should force the Mayor and the Chancellor to pay attention to the inherent inequities in the system, which weren’t created but exacerbated by the COVID-19 crisis. All stakeholders have been confronted in a way as never before with the overriding need to implement an effective long-term plan to reduce class size. As Deborah Alexander of CEC 30 wrote to our NYC Education news list serv, “If this doesn't make DOE wake up to the issue of class size, nothing will.”
Posted by Leonie Haimson at 7/09/2020 09:19:00 PM

Carranza has a "School District Leader Professional Certificate" but does not appear to have a teaching credential.

I do not believe he can teach in New York State.