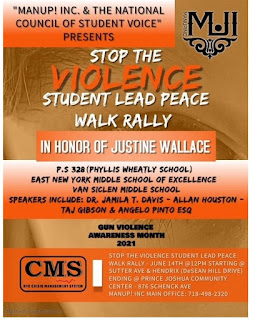 In the wake of gun violence that brought the death of a 10 year old child in Far Rockaway, New York, elementary and middle school students from East New York, Brooklyn will march and rally on Monday, June 14 as part of Gun Violence Awareness Month.

The march was organized by the National Council of Student Voice, an initiative of The Academy for Social Transformation, and Man Up! Inc., a community service organization in East New York, Brooklyn, dedicated to building a safer city through violence prevention, education and employment.

ManUp! was founded in 2003 by activist and honorable chair of Community Board 5 in East New York, Andre T. Mitchell in response to the killing of 8 year-old Daesean Hill by a stray bullet as he walked home from school with his stepfather and younger siblings.

“The tragic killing of 8 year old Daesan Hill in East New York nearly two decades ago brought us together to address the scourge that is gun violence in our community,” said Mitchell. “The killing of 10 year old Justin Wallace in Far Rockaway brings us together now, again, to address gun violence for what it really is – a public health crisis that has reached the level of a state of emergency and should be declared as such.”

Last year, students from East Orange under the tutelage of Seton Hall Professor Juan Rios, Jamila T. Davis and Angelo Pinto, Esq., marched to garner attention for the case of Maurice Gordon, an unarmed black man from Poughkeepsie, N.Y. killed at the hands of police on the Garden State Parkway in New Jersey. The East Orange students’ protest was featured in media outlets throughout the United States and internationally.

East Orange high school student Kimberly Cross, who received a full scholarship to attend Princeton University in the fall, said “In East Orange we learned that our voices matter – that we don’t have to wait until we’re 21 to demand a better world than the one we’ve been left with. That,” said Cross, a member of the newly founded National Council of Student Voice, “will be my message to the students of East New York and students around the world: Act Now.”

The students in East New York rallying on behalf of Justin Wallace and against gun violence are part of a curriculum taught through The Academy for Social Transformation, designed to bring social emotional learning and social justice awareness to middle school and high school students.

“Violence in America is a disease with systemic roots that requires systemic solutions.” said Angelo Pinto, executive director of The Academy for Social Transformation. “Students need to understand themselves as empowered agents of change on both a personal and societal level. Daesan Hill and Justin Wallace had their opportunity to effectuate change cut short – but we can act in ways both small and large to make those changes for them, and ourselves.”

The students will begin their rally at Daesan Hill Drive (at Sutter Avenue and Hendrix St.) in East New York, Brooklyn at 12 noon and conclude at the Prince Joshua Avitto Community Center (PJACC) at 876 Schenck Ave, Brooklyn, NY. The center was named after P.J. Avitto, a 6 year old boy who was stabbed to death in 2014. Avitto was the cousin of New York Knicks basketball player Taj Gibson, who will attend and speak at the rally along with former Knicks star Allan Houston.