Why is the Mayor so resistant to lowering class size in the face of his long-standing promises to do so? 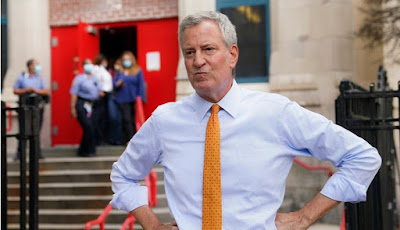 We heard through the grapevine that the Mayor is stubbornly fighting the City Council proposal to invest $250 million next year in lowering class size.

Yet when Bill de Blasio first ran for Mayor, he promised that he would commit to specific class size reduction goals and achieve them by the end of his first term.  He made that promise verbally at a mayoral debate on June 14, 2013, and then checked off the following box in a document handed to him at the event, and signing his promise with his name at the end. 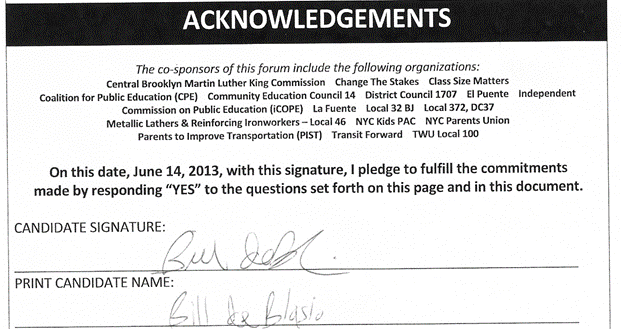 Yet after he was elected, de Blasio never followed through and focused on expanding preK and  3K instead.

Still, when parents pressed him about the need for smaller classes, he repeatedly said that  he would do this when he finally received the full funding from the state from the CFE lawsuit.

Now that our schools are receiving that additional CFE funding of $530M next year, rising to $1.3B annually over the next three years, not to mention $7B in additional federal aid to our schools, he no longer has this or any excuse to deny NYC children their right to smaller classes.

We have heard that instead, de Blasio is arguing for spending a very small amount  towards putting two teachers in a classroom.  Yet doubling up on teachers  has not been shown through research to have the same positive impact as lowering class size, nor does it have the same effect in terms of creating a focused, engaged learning environment.

In fact, the number of inclusion classes with two teachers has grown steadily over the last decade, and now fully one third of all elementary school children in NYC public schools are in classes with two teachers.  Yet there has been NO significant improvement in achievement as gauged by the NAEP results over this period for either general ed or special ed students, or in any other way that can be measured.

In terms of anecdotal evidence, many parents  report that even with two teachers, their children’s ICT classes are too large to provide them  with quiet, focused environment they need.  Many teachers agree. See the responses from two NYC ICT teachers when I pointed this out recently on twitter, in response to a Chalkbeat article about PS 89 in Brooklyn:

"school plans to deploy additional staff...in grades K-2 so most will take classes that are co-taught, a popular model for serving students w/disabilities rarer in traditional classrooms" Actually ~ 1/3 of all K-5 students are in ICT classes w/2 teachers, most w/o disabilities.

Problem is that many of these classes w/2 teachers are so large they do not provide same benefits as smaller classes do.

One ICT teacher responded this way:

👆👆👆
Signed,
- a gen ed teacher w 2 ICT sections w as many as 5 coteachers just for them bc my subject doesn't have dedicated coteachers. Some don't know kids' names, let alone who has what on their IEP.

Then another teacher chimed in:

Another co-sign from a SpEd teacher.

The one thing by consistently shown to have the largest impact on social/emotional/academic/everything is the one thing they refuse to deliver: smaller classes. Ask my kids with ADHD, autism, EBD if they care about their two teachers when there are 33 other kids in the room.

NYC students continue to be subjected to class sizes 15-30% larger than those in the rest of the state.  While they have always needed smaller classes, this is true now more than ever before, both for the sake of social distancing and to provide them with the closer emotional and academic support they will need, after spending a year and a half of remote learning.

Why is the Mayor so resistant from accomplishing what has been proven over and over again to work to improve the learning environment for teachers and students, and has consistently been the top priority of NYC parents since the DOE began administering their parent surveys?

Only  he and his staff can answer that question, but if de Blasio continues to refuse to lower class size even when there is a crying need for this, he will have both  broken his campaign promises and destroyed his own claims to have provided an equitable and quality education to NYC kids – despite having a golden opportunity to do so.