I’ve testified at countless mayoral control hearings since it was instituted nearly 20 years ago. Yesterday’s joint Senate and Assembly hearings far surpassed any of them.  You can watch the video here. Sorry to say there were very few news stories about it, because most of the education reporters were covering the Mayor's announcement about lifting the mask mandate in schools.  It was their loss, since the questioning by legislators was sharp and had a new seriousness about it, and the testimony from parent leaders was passionate and incisive.


In recent years, the opposition to Mayoral control has grown, here in the city and nationwide.  As I point out in my testimony, the system has never been popular among average voters.  But the evident dysfunctionality of the system and the way it allows autocracy to override the wishes of parents and the needs of children, no matter who is Mayor, is now more widely recognized.  Many districts such as Detroit and Newark that once suffered under mayoral control or worse, state control, have returned to an elected school, and Chicago will soon do so.

This was the first time in my experience that influential legislators seem really intent about making improvements to the law.  Sen. John Liu, chair of the NYC Education Senate committee, and Sen. Shelley Mayer, chair of the NY State Senate Education Committee, along with Assemblymembers Harvey Epstein and Jo Anne Simon, closely questioned Chancellor Banks  about what changes could be made that would ensure that parents have a real voice in the system.  Yet he seemed strangely unprepared for their pointed questions.

After a brief appearance by Mayor Adams, who was driving in his car but didn't have time to answer any questions, Chancellor Banks said that the DOE had brought down school Covid positivity rates  from 16% at the beginning of January, to below 1% now, which he claimed was a "direct result of Mayoral Accountability."

Yet as was widely reported, Omicron exploded in our schools with tens of thousands of students becoming infected in January, with DOE's safety protocols recognized to be  largely ineffective.  The Omicron surge rose and fell on its own in our schools, as it did nearly everywhere else in the city and indeed the nation, and this had nothing to do with any new measures put in place by the Adams administration. Indeed, as I pointed out in a tweet, the schools in Los Angeles have put in place far more effective Covid vaccine and testing protocols, and their schools are governed by an elected school board.

Banks also claimed he would be a far different kind of Chancellor than those who preceded him, because he himself had gone through the public school system.  Unmentioned was that Joel Klein attended NYC public schools as well, and we know how little respect he showed parent and community views and priorities.

Banks promised that he intended to closely collaborate with the parent-led Community Education Councils.  But when AM Epstein asked him what he thought of any of the numerous specific improvements to the Mayoral control that the CECs have proposed in many resolutions, Banks admitted he hadn’t read them.

Senator Shelley Mayer followed up by asking whether he would agree to any specific changes to the law to ensure parent input is taken seriously.  Banks then turned to Deputy Chancellor Weisberg to ask "Dan do we agree with any changes?" Weisberg, who was himself high in the DOE leadership structure for six years under Chancellor Klein, said no.

There was also much discussion on the failure of the DOE to put any effort into reducing class size during the twenty years of mayoral control -- even though this is a critical reform proven to help students learn, especially students of color.  Smaller classes are also the top priority of NYC K12 parents every year on the DOE's own parent surveys. 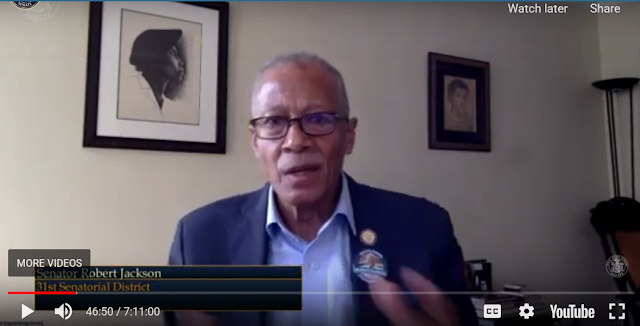 The topic of class size was first introduced  by Sen. Robert Jackson, the original plaintiff in the Campaign for Fiscal Equity lawsuit, which after many years of advocacy, is finally bringing more than $1.3 billion in additional state funds to NYC schools. Yet the administration plans to invest none of these funds in lowering class size, though the city's excessive class sizes were a central issue in the lawsuit and the court's decision that our students were deprived of their right to a sound, basic education.  The topic of class size was also mentioned by AM Jo Anne Simon and some other legislators.

Sen. Jackson repeatedly threatened that he would hold back state funding if the DOE refuses to lower class size, as outlined in the his bill S6296A, and the same as Assembly bill, A7447A, sponsored by AM Simon. Jackson also implied that his support for continuing mayoral control was at risk due to DOE negligence on the issue-- and that in any case, he would not support an extension of more than two years.

When asked what were their plans in terms of class size, Banks again deferred to Weisberg, who said that class sizes had already decreased this year, partly because of enrollment decline - which is true. Though I hadn’t commented on the issue in my written testimony, when I had a chance to testify in the afternoon, I pointed out that if the city's proposed budget cuts to schools are adopted, amounting to nearly one billion dollars over three years, class sizes will quickly increase to their former levels. 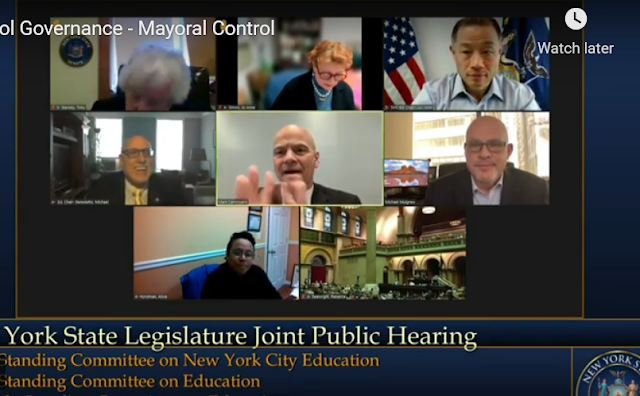 In response to Jackson's questions, both UFT President Michael Mulgrew and CSA President Mark Cannizzaro agreed that lowering class size was critical; Cannizzaro added that to do so, the Fair Student Formula (FSF) that  is the main source of every school's funding must be altered, since it  is aligned to large classes.

In my oral testimony, I pointed out how the FSF Task Force created by the City Council in 2018 had never released their report, because its members pushed for revising the formula to allow for smaller classes, but the Mayor's office under de Blasio had stifled their concerns, by refusing to allow the issue to be mentioned in the report.

Another problem that both Mayor Adams and Chancellor Banks encountered is a glaring contradiction in their rhetoric .  Both repeated their now-familiar refrain about how terrible our schools are, especially for Black and brown kids. But of course, if true, this failure persists after twenty years of mayoral control - the very system that they claim is necessary to solve the problem.

Banks tried to get around this evident contradiction, by testifying that all the deficiencies exhibited by our schools are the result of the system that earlier prevailed, more than twenty years ago: "We are still dealing with the remnants of the past world before Mayoral Accountability was adopted.  Corruption, patronage, and inequity ruled the day, and our students suffered greatly.  That is evident in some of the glaring disparate outcomes we still see, especially for communities of color."

Yet this argument didn't seem to be particularly convincing to the legislators.  In fact, in the first five hours or so of the hearings, while I was still watching, only one of them expressed strong support for continuing the current system for another four years, Senator Luis Sepulveda from the Bronx.  A four year extension is what Gov. Hochul has proposed and of course Adams and Banks would prefer:  The attitude of the other legislators seemed to range from slight skepticism to clear opposition,  at least during the portion of the hearings that I was able to observe.

Moreover, the parent leaders who spoke were nearly unanimous in their criticism of the way in which mayoral control had allowed their voices to be ignored and the needs of their community's public schools to be trampled upon, by both Bloomberg and de Blasio.  Their testimonies were tremendously compelling,  and in their combined impact, overwhelming.  I hope you watch them here. There was only one parent among the scores who spoke during the first five hours who said she supported the current system to any degree: Yiatin Chu, the co-chair of PLACE,  and even her co-chair, Lucas Liu, appeared to disagree.

My brief oral comments are at about 4 hours and 46 minutes into the video, and focused on two issues: class size and fiscal accountability.  In my written testimony, I detailed and supported many of the changes proposed by the Education Council Consortium and the CECs, including a reconfiguration of the Panel for Education Policy so that the mayor no longer appoints a majority of members, and a requirement that the DOE should be made subject to local laws passed by the City Council.  Currently, unlike every other city agency, the City Council can pass laws regarding education only in the area of requiring more DOE reporting, not in any policy area.  I also spoke about the need for stronger fiscal oversight by the   Panel for Education Policy, who every month routinely rubber stamp many wasteful contracts worth hundreds of millions of dollars, with insufficient scrutiny and sometimes even those awarded to vendors who had previously been shown to be corrupt.

To address these glaring problems, I proposed that the NYC Comptroller be able to appoint a non-voting PEP member, who could provide expert counsel on contracting and other financial matters .  I also proposed that the Comptroller be responsible for training the PEP members in financial oversight, accountability, and fiduciary responsibilities.  According to state law, all Board of Education members are supposed to receive at least six hours of such training; and yet PEP members have publicly said that the training they receive is insufficient and minimal at best.

The state law does include a provision that the DOE is exempt from these requirements, but only if the Chancellor certifies annually in writing to the State Education Department that the training that PEP members receive is at least as rigorous as the law requires.  Yet after I FOILed the State for these written certifications, NYSED said they hadn't received any in at least the last three years.