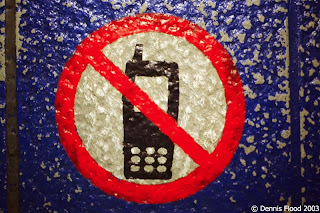 Today, Judge Lewis Stone issued a negative decision in the cell phone case. NYC parents had sued the Department of Education so that their children could carry cell phones to school, to ensure their safety and to communicate with them before and after school. An appeal is likely.

Among the arguments made by the plaintiffs' attorneys, including civil rights advocate Norman Siegel and the law firm of Morgan Lewis, was that DOE's extreme and blanket ban violated the constitutional right of parents to "make decisions concerning the care, custody and control of their children," under the 14th amendment.

Yet the Judge argued rather weakly that when the 14th amendment was written in 1868, there were no cell phones, so no such fundamental right could exist.

The Judge also claimed that principals still retained the authority at their discretion to allow students to carry cell phones. This appears to be a misinterpretation of the current situation, in which Mayor Bloomberg and Chancellor Klein have insisted on a complete and utter ban, with only very limited exceptions in the case of health.

The decision is here; see also this article from the NY Sun. Here is an excerpt from a statement by the plaintiff's attorneys:

Justice Stone failed to address the petitioners' argument that the cell phone ban exceeded the DOE's authority to prescribe reasonable rules and regulations for the general control and discipline of the schools.

The parent petitioners and their attorneys are disappointed with and disagree with Justice Stone's decision, remain committed to the reversal of the ban, and are strongly considering all possible grounds for an appeal.

In the meantime, it should be noted that Justice Stone suggests in his decision that the cell phone ban permits each school's principal to individually address the issue of students' possession of cell phones at their schools. In a section entitled "Special Circumstances," Justice Stone notes that principals may generally authorize students to carry their phones if certain factors exist, for example, if there are locations where the phones would not be disruptive, if the students are willing to abide by a rule against the use of the phone in school, or if there is a lack of availability of pay phones or commercial lockers for students to deposit their phones during school hours near a particular school. Individual parents and parent groups should address such authorization directly with their school principals.
Posted by Leonie Haimson at 5/07/2007 07:54:00 PM