more testing=more learning, according to the Chancellor 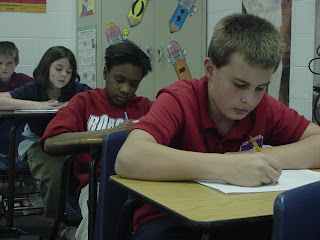 As our blog discussed more than a week ago, DOE announced that McGraw Hill will provide the new periodic assessments -- the same company that came up with the infamous Brownie the Cow.

According to the DOE, schools must give five assessments per year in grades 3-8 and four in High School in ELA and Math. More subjects will come later.

These tests will cost $80 million over five years and are separate from the state tests that are already required in grades 3-8. This, plus the cost of the ARIS supercomputer (another $80 million) could have paid for a whole lot of smaller classes. According to the New York Times,

“…few major cities administer standardized tests as frequently as five times a year, several education experts said, and the move instantly drew criticism from the array of groups that have mobilized against the growing reliance on standardized tests that has accompanied the No Child Left Behind law.

“It’s certainly more than any other city than I know of,” said , an executive director of the National Center for Fair and Open Testing in Boston, which is skeptical of standardized testing. “We’ve reduced schooling to preparing for bubble tests.”

Randi Weingarten, the president of the United Federation of Teachers, said in an interview that many teachers say they already spend at least one day a week preparing for standardized tests. “Our issue is, how much teaching time is this eating up?” she said. “You’re spending a lot of time doing test prep and doing paperwork associated with test prep instead of teaching.”

When did more testing become more learning? In the jargon of the Accountability office, more test results supposedly allows for more “differentiated” instruction “ which will lead to more learning.

Yet the smaller classes that would really make individualized instruction more possible are not considered. Instead, DOE has omitted the crucial step of improving classroom conditions – because mandating more testing will somehow substitute for everything else.

Apparently DOE could find only one principal in support of the new assessments: Elmer Myers, of PS/MS 194 in the . He is quoted in both the Daily News and NY1.

"This gives much more specificity from what I've seen for far, than what we've had in the past,” said Elmer Myers, a school principal. “We'll be able to take that information, sit down as a professional development team, and design ways we can improve instruction in a classroom."

According to Insideschools, Meyers is a new principal this year. The school’s report card shows that 14% of the students at PS/IS 89 are black, 64% Hispanic, 17% Asian, and 93% are eligible for free lunch.

According to the DOE, class sizes at the school range from 24.6 students in Kindergarten to 31.7 students per class in 4th grade. Sixth to eighth grade classes range from 27.4 to 29.8 students, with each middle school teacher usually responsible for five classes.

That means every middle school teacher has about 150 students, with charts to be analyzed for each class in different eye-glazing, color-coded categories five times a year. (See p.19 of this pdf file for an example of a class of only 17 students.)

Then, the revealed weaknesses of each of these 150 students will somehow addressed – that is, if the results are meaningful at all, which they won’t be, according to many testing experts and the record of the previous version from Princeton Review. And, of course, this will also depends on there being sufficient time in class to do so, along with all that test-taking.

Good luck to Mr. Myers, his teachers and most of all, the students at this school.

(For more information on the periodic assessments, see the DOE website here.)

Is it really accurate to say that kids will be tested five times instead of three? Seems to me most teachers give tests and quizzes at least once a week. So you have to figure that kids are being tested 30 or 40 times a year in ELA, math, and basically every other subject. And that's been the case as long as schools have been around, I'm sure. So what's the big deal? Teachers have to check in on what kids have learned - that's breaking news?

Honestly, my son (grade 5) takes far fewer tests than I did as a kid. I used to get quizzed weekly in math, spelling, vocabulary - less frequently, but still often, in social studies and science. I don't have a problem with this as long as parents actually get to see the results - my son's teacher doesn't send graded tests home! I'd rather see meaningful, deeper assessments, but if this is basic skills quizzing that is tied to a computer system which will generate reports that parents have access too, I think the complaints are overblown. For me, the issue is not with this, but with the state tests being used for so many different purposes. They're ultra high-stakes (though again - to be fair - we have not yet had a teacher who really did much formal test prep. Our teachers prepared kids for the ELA by reading literature and writing essays/stories. They prepared for math by teaching the kids the necessary math skills). The main complaint I have is that the kids get stressed about the tests, and in our experience, a lot of that is coming from the other parents who are freaked out about the tests and making the kids neurotic. Of course, there are legitimate reasons for all that, but personally I don't think the problems are in testing per se, just in how the tests are used.

The problem w/ the standardized interim assessments is unlike math quizzes or spelling tests they are not tied to the curriculum or what's happening in schools. Thus the results will likely be useless - as were those previously produced by the Princeton review.

Moreover, many experts in testing (including the former head of testing for DOE, Bob Tobias) explain that the statistical error is so large in any system of interim short-term standardized assessments is that even if these tests were properly aligned w/ the curriculum, the results will be so unreliable as to be useless.

Finally, the whole point of these assessments is supposedly to help teachers provide "differentiated" instruction. A far more effective way to do this would be to reduce class size -- which the administration absolutely refuses to do. Instead, they only want to provide more tests.